My son: Training for his first half marathon

Home » Family » My son: Training for his first half marathon

For as long as I can remember, my son has been saying that he will run the Cheltenham half marathon when he turns 17. (Generally speaking, 17 is the age when kids can enter a half marathon for the first time.)

There are many advantages to being fit and active as parents. There’s the fact that you are stronger and healthier, of course, and there’s the sense of wellbeing, but what it’s easy to forget is that it also inspires your children. I have been running for my son’s entire life (and for a few years before that). My husband dips in and out of it, but is definitely a runner at the moment (he also plays football and has done a lot of cycling). So, for my kids, sport and being active are the norm. If their parents run half marathons, why wouldn’t they want to?

My son turned 17 about 12 weeks before this year’s Cheltenham half marathon. Twelve weeks is generally a good time to start training – for a non-runner who is reasonably fit, you can go from nothing to 13 miles in 12 weeks.

Was he going to start training?

Funnily enough, now he actually was 17 and the half marathon was a real possibility, he’d gone a bit quiet on the whole training thing. Did he really want to do it?

We got to eight weeks before the half marathon and he still hadn’t started training. Eight weeks before really is crunch time. Eight weeks is enough for someone who can comfortably run 5k to get themselves up to 13 miles. My son hadn’t done a parkrun in over a year, but 17 year olds do have a reasonable amount of underlying fitness.

He was going to do it!

He did his first training run while we were on holiday in Padstow. He knew where he wanted to run – it was five miles on the Camel Trail. My husband and I ran with him, and my daughter cycled. He started off OK. Then he got slower and slower. He was very out of breath by the halfway point. So I stayed with him and we alternated running and walking for the second half of the run. He managed to run four miles, which isn’t bad at all for a first run. He did another run while we were away, plus Killerton parkrun on the way home. 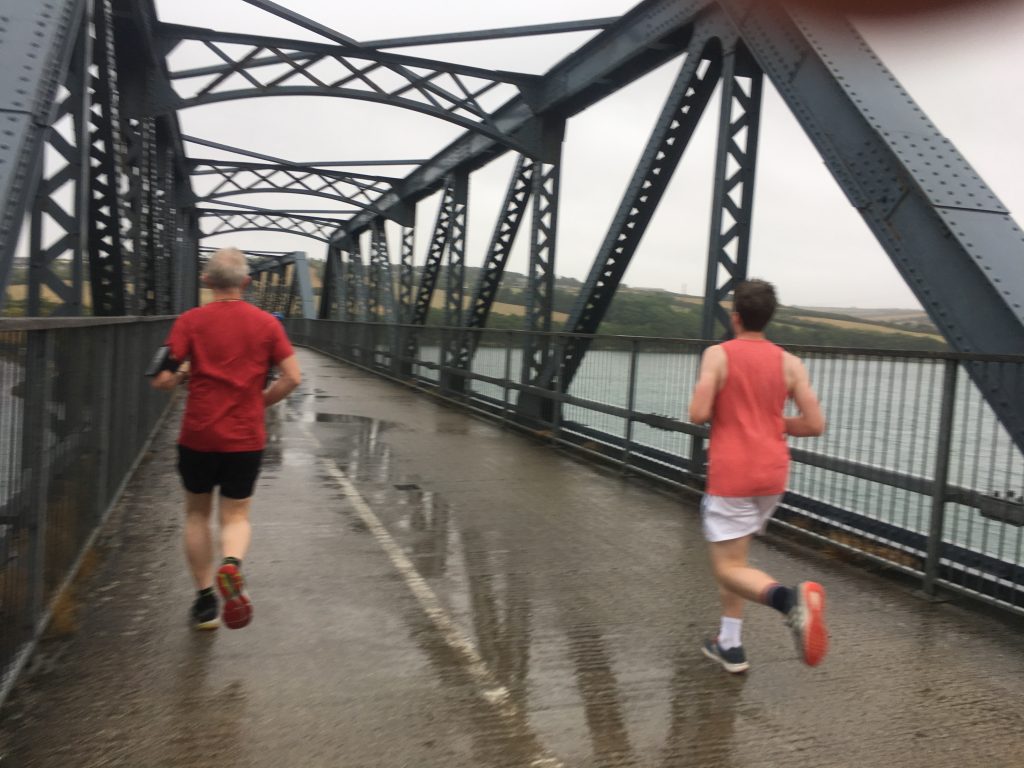 I found him an eight week training plan online, which he took reasonably seriously for a week or two. He was managing about three runs a week and it wasn’t long before he was comfortably running six or seven miles at a time. He mainly ran on his own, because his teenage body clock didn’t fit well with when my husband and I needed to run. He ran with my brother-in-law once and he much preferred running with him to me (luckily I don’t get offended by such things!).

On holiday in Center Parcs, my husband, brother-in-law, son and I did a 10 mile run around the park. My son and I lost my husband and brother-in-law fairly early on, as my son couldn’t keep up. We did our 10 miles at 10 minutes per mile pace, which is much slower than I’m used to. But we did it! My son had run 10 miles!

Once he got back to school, he wobbled a bit. It was hard to fit running around school and he wasn’t organised enough to look at what he needed to do when (homework, part-time work, Explorers etc) and work out how to fit runs around it. I did advise him, but like most teenagers, he isn’t always keen to listen to advice.

He had his training plan to work from, but my advice to him was to do something like a four or five mile run and a six or seven mile run in the midweek, then a long run at the weekend. So he did a three mile run one day, then a 1.5 mile run the next day. It wasn’t really enough with less than three weeks to go until the big day! Then there was the day when he decided to take himself for a seven mile run an hour after eating his tea. He did well to manage five miles before the stitch and feeling sick got too much for him. Again, I’d advised him on eating and running, but he’d ignored me.

Two weeks before the half marathon, he took himself out for a 12 mile run. After weeks, he finally took my advice and downloaded the Runkeeper app (if you haven’t got a running watch, it’s a really good alternative). This way, he could know for sure how far he was running. I must admit that at times I’d suspected his seven mile runs were actually six miles, which is OK, but it’s best to get as much distance as you can into your legs.

He was knackered afterwards, but he did it! I think he’s ready for his first half marathon…