Reaching the 100th parkrun is a big milestone. It even comes with its own special Tshirt to mark the occasion. Think about it, it’s the equivalent of running a parkrun every Saturday almost without fail for two years – or running alternate Saturdays for four years. Whichever way you look at it, reaching 100 parkruns is a big commitment.

I’m not sure about other parkruns, but at ours they always make a big deal out of celebrating it. The person running their 100th parkrun gets called out to the front before the start of the run and gets given a centurion’s cloak and hat to wear for the run. They have a photo taken and everyone gives them a round of applause.

As our parkrun has been going for a long time, it’s not unusual to get to your 100th parkrun, but it still feels like an exciting milestone. I remember someone being awarded the cloak and hat on my very first Parkrun way back in 2015 and there has been one or two ‘centurions’ a week ever since then – and sometimes as many as four.

It was as far back as summer 2016 that I thought I could achieve my 100th parkrun by Christmas 2017, but then I ended up reaching my 50th Parkrun milestone later in autumn 2016 than I’d imagined (November), so wasn’t sure if I’d make it. Fifty parkruns in 13 months is a big ask. But, although I don’t make new year’s resolutions, in 2017 I resolved that I would always put parkrun first on a Saturday morning. So rather than run two out of three or three out of four weeks, I would run every week. And I did pretty well – I missed just seven out of 53, and I volunteered at one of the ones I missed.

So with my increased commitment to parkrun, my target of Christmas 2017 was back on. I didn’t mind if it was a week before, two weeks before or on the day. It just needed to be by Christmas.

There was a blip a few weeks ago when I got injured. I walked Parkrun twice and realised I hated walking it (despite the fact that I love both parkrun and walking). Because I hated it so much, I knew I could never walk my 100th. I had to run it, even if it meant delaying it into 2018. I didn’t mind if it took me 30 minutes to run, as long as I ran it.

In the end, I had two weeks of walking, one week of half running and half walking and one week off completely before I was back to running. While I’ve been injured I’ve lost a lot of fitness. On my first run back, I did it in 26:13. To put this in context, my PB is 22:23 and I usually run in just under 23 minutes. But I ran it, and that’s all that matters! A week later, my 99th parkrun, I did it in 24:57. 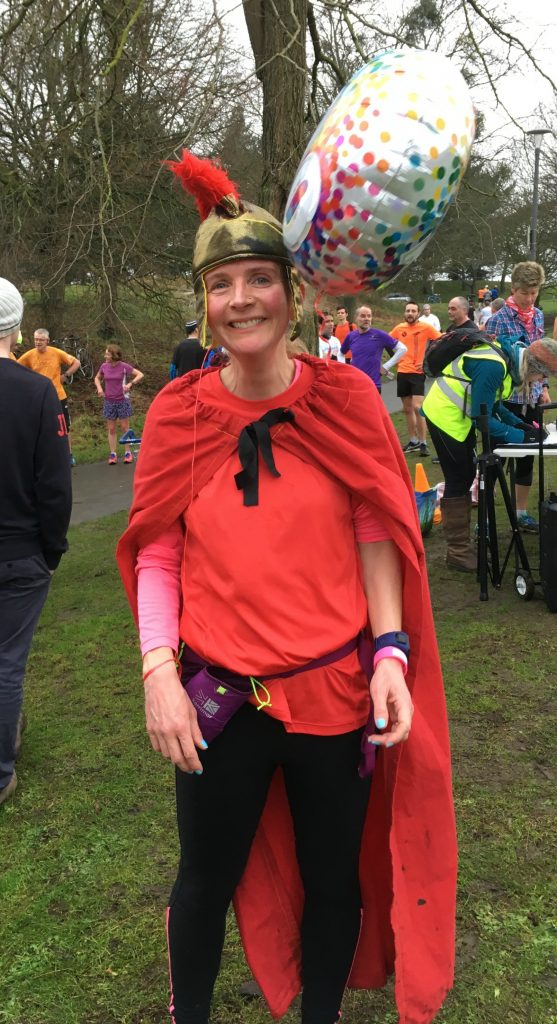 I had a 100 balloon tied to my wrist and somebody congratulated me before I’d even locked my car. (The man in the party shop says he sells far more 100 balloons to parkrunners than to people celebrating their 100th birthday.) My husband and younger son ran, as did my dad, my sister and brother-in-law and their kids (kind of). My eldest, daughter and mum were all there to support me.

I was the only ‘centurion’ of the day. My name was called out and I went up to the front where I had the cloak tied on and the hat jammed on my head. And everyone gave me a big cheer. The cloak was heavy and it smelled exactly as you would imagine a cloak worn by a lot of different runners would smell. But I felt honoured and excited to be wearing it.

It turns out that running in a cloak isn’t easy at all. I ran as fast as I could with the weight of it dragging me back. But the point of the 100th parkrun isn’t to break records, it’s a celebration. The cloak means that everyone knows you are running your 100th parkrun and someone shouts ‘well done’ or ‘congratulations’ every few seconds, even though they are running themselves and out of breath. It’s a fantastic feeling.

I finished in 26:15, which wasn’t bad for a woman returning from injury, weighed down with a heavy cloak.

I loved running my 100th parkrun. My next milestone is the 250th. I reckon that will be summer 2020 – or Christmas 2020 if I start volunteering more often. 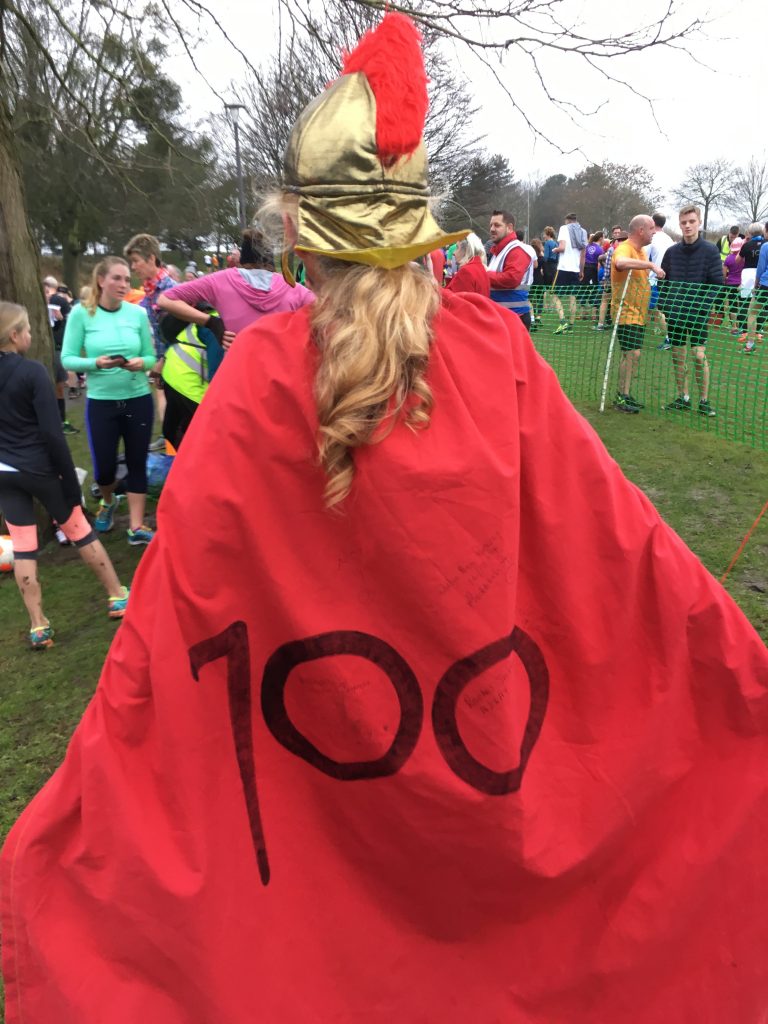