A few weeks ago, an injury literally stopped me in my tracks. I COULD NOT run. This has never happened before. There’s been pain before. Pain that is advising me not to run, but not pain which has physically stopped me from running.

But I had a target. A target which didn’t allow me to stop running.

At the stop of the year I told myself I wasn’t going to miss Parkrun for vague reasons. Parkrun was always going to come first on a Saturday morning. And, just as importantly, I was going to make it to 100 Parkruns by Christmas. It didn’t matter to me if it was at Christmas day Parkrun or a week or two before, all that mattered to me was that I made it.

So far in 2017 I have missed just five Parkruns – one for a bad cough, one for my daughter’s birthday party, one when the kids set off on their Scout camp, one when we visited our friends in Weymouth and one when we went on holiday. That’s not bad in 11 months!

I had 94 Parkruns under my belt and only a few weeks until Christmas. If I was going to hit my target, there was only one thing for it. I was going to have to WALK THE PARKRUN.

There’s nothing wrong with walking the Parkrun, in fact it’s positively encouraged. Parkrun’s strapline is Run, Jog, Walk, Volunteer, which just shows how inclusive it is. It’s about everyone getting fitter at their own pace. I didn’t think I’d mind walking.

But I hated it.

I walk a lot in general. I like walking. But I discovered I don’t like walking round my beloved Parkrun. Me, who is fastest in my age category most weeks. Me, who was third female overall the previous week. Walking the Parkrun just didn’t sit well with me.

I walked as fast as I could, but it just felt so slow. And a little bit boring.

I felt humiliated and judged. I felt like I stuck out like a sore thumb. I felt like Dug, the dog with the Cone of Shame on his head from Up. Walking the Parkrun was my very own Cone of Shame. Which is silly, I know. I don’t judge anyone for walking or running very slowly, so I’m pretty sure nobody was judging me. I was just judging myself.

People do Parkrun for all sorts of reasons. For some it’s the first step towards a healthier lifestyle and walking it or jogging it very slowly is a huge achievement. And I have massive respect for everyone who does it, however quickly or slowly.

I always tell my daughter it doesn’t matter how slowly you run it, you’re still lapping everyone who is still in bed.

But I just didn’t want to be the slow one.

I finished in 47 minutes and 27 seconds, taking more than twice as long as my usual sub-23 minutes. And I knew that I had to get better before Christmas, because there’s no way I can walk on the momentous day I reach my 100 Parkrun milestone. If I’m still walking then (which I really hope not to be), I will just have to delay my 100th Parkrun for a few weeks until I’m ready to run. I don’t mind if I have to run my 100th Parkrun in 30 minutes, but I do mind if I have to walk it!

The following week I walking in an official capacity – as the volunteer tail walker (the person whose job it is to cross the line last). That felt a lot better. I was pleasantly surprised at how many people thanked the tail walker as they ran. I always say thank you to marshals, but had never thought of saying thank you to the tail walker.

And I’ve been to physio and got some strengthening exercises to help myself get better. Hopefully my time walking the Parkrun like a dog with a cone on its head is going to be pretty short-lived! 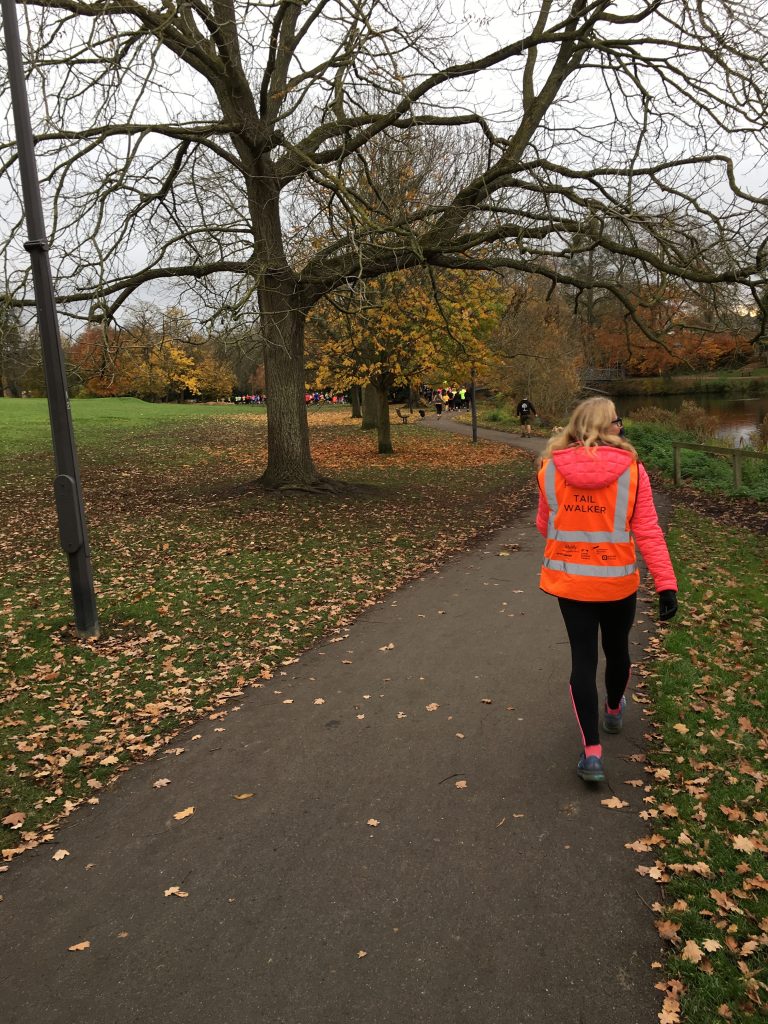