To MRI or not to MRI?

It’s been a few weeks since I’ve written about my daughter’s foot. Mainly because, thank goodness, she’s been better. She first got ill on (Friday!) 13th February, her foot started hurting on the following Tuesday and suddenly stopped hurting on Friday 13th March.

Needless to say, a couple of days after that, we suddenly got all the letters from the hospital we’d been promised – a follow-up appointment with the paediatrician, a physio appointment and an MRI letter. What’s that all about?

An MRI scan was mentioned as a possibility when she first saw an orthopaedic doctor and my daughter started trembling and clinging to me and saying she wouldn’t have one. Although I had one myself earlier this year, and didn’t enjoy it at all, she’d learned about MRIs from a boy at school who told the class about it in great detail. My daughter didn’t like the sound of it.

When we saw the orthopaedic consultant a few days later, he said she didn’t need an MRI. Thank goodness!

Then suddenly we have a letter from the paediatrician recommending one. I didn’t get it. Why was she recommending it when the orthopaedic consultant said she didn’t need it?

I’ll be honest, the letter nearly went straight in the recycling. We couldn’t make that date anyway.

And then the next day, eight days after her foot had stopped hurting, she woke up limping again.

She needed that MRI, didn’t she?

At the same time, I’d been a bit freaked out to hear about a boy my younger son knows who had been ill in the autumn and had been left with an infection in a bone, which he still has, and which is proving hard to shift. The boy is soldiering on as best he can, but can’t do sport and is still quite ill.

What if my daughter has something like this? It would be foolish in the extreme to miss out on a diagnosis and get the right treatment because she was terrified of having an MRI scan.

So she’s going to have it. She just doesn’t know that yet. She’s seen on the calendar that she’s got a few hospital appointments over the next few days, but she doesn’t know what for. My husband, who is calmer than me, will sit in the room with her. He says we shouldn’t tell her until the day. It seems a bit dishonest, but I think he’s probably right.

It will be horrible to have her scared and upset, but it’s more important that we know for sure what is wrong with her foot. 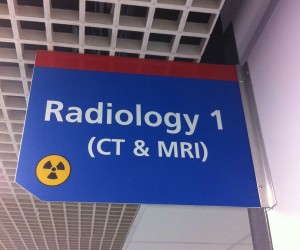