For a claustrophobic, I’d remained remarkably calm about the prospect of an MRI scan on my bad leg. I’d told myself that as the problem was in my hip, I would be going in feet first and my head would be sticking out of the end. It would all be fine.

My appointment was at the rather strange hour of 7.20pm, which did give me a lot of daytime to start  worrying. What if I did have to go in head first? I literally don’t think I could do it. I wished my husband was going with me, but Monday night is his night for playing football and that’s pretty much sacred. It has to be life and death for him to miss football.

The letter said to arrive half an hour before the appointment time, which I did. I’d only read two and a half pages of my book (I’ll be honest, I was looking forward to more reading time than that), when I was called through. I ran through a series of questions which can be summarised with: ‘Have you got any metal in your body?’, asked in lots of different ways. Then it was time to take my clothes off, including my bra (contains metal), but not including Tshirt, pants or socks, and get a gown on. 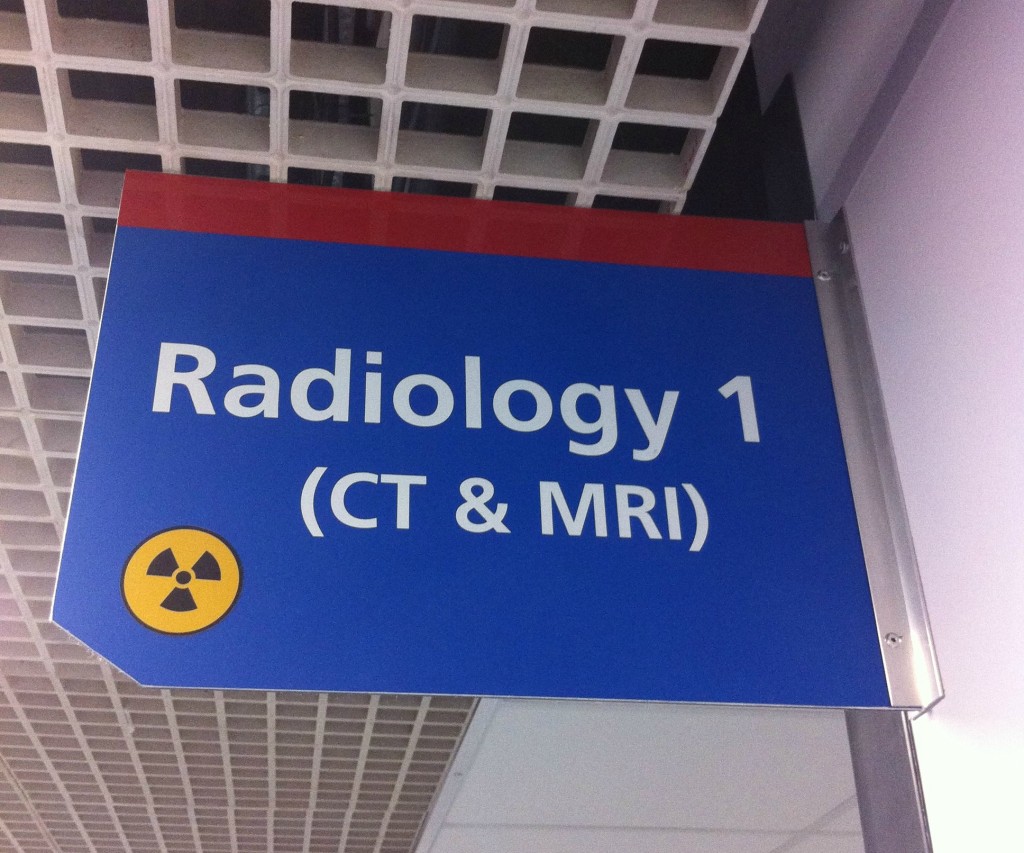 Then I got the bad news. I was going in feet first BUT my head would be inside.

It was very calm in the room – white and clinical, with this strange tunnel in the centre, with a sort stretcher emerging from it. I lay on the stretcher (one pillow or two?), positioned my hips in the middle of it, where the scan would be, was covered with something heavy and a blanket for my feet. I was given a little squashy panic button to hold and heavy headphones with indeterminate music playing (it was kind of reggae party music). The screen outside the scanner recorded my weight and also how many millimetres I was inside or outside or near the actual scanning bit (I don’t know which it was, I just know it counted up and down really fast when the stretcher bit moved).

I felt strangely calm. I should be panicking. I was going to be in there HALF AN HOUR. Trapped. What would I do? I never do nothing for half an hour, I’m incapable. I need to keep busy, I need to keep moving.

I moved back out and did my claustrophobia breathing exercises and had a few sips of water. The pillow was taken away so my head had more space. Once I felt calm, I went for it again. I closed my eyes, it was easier that way.

The scanner started. It was like being stuck next to (or maybe even inside) a pneumatic drill. The music did nothing to drown it out, in fact the music was barely audible. Every now and then the noise would stop, the machine would move very slightly, then there would be a slightly different noise, like a countdown, and then the big noise would start again. This was the scanner changing to a different angle.

When I looked up, it was surreal. Like being in a film or a nightmare – when somebody wakes up and doesn’t know if they’re dead or not.

I kept my eyes closed and breathed slowly. I felt almost calm. I was in a sort of trance. I didn’t move at all.

But then I moved my lips. They felt dry. My nose felt bunged up, so I wriggled it. I was out of my trance and aware of what was going on. I felt thirsty. I needed the toilet. My feet felt too sweaty in my socks. I couldn’t cope with it.

I was good. I waited until one of the silences to press the panic button. I just needed a break.

I had a sip of water and blew my nose. I wasn’t allowed to take my socks off (and definitely wasn’t allowed to go to the toilet!), but the blanket came off. I had 14 minutes left. Fourteen minutes! I could do it!

The music had changed to something more calming. I decided to count. I would count to 840 – 14 minutes. I must have gone into a bit of a trance again as I only got to 160. The noise stopped, but this time it didn’t start again. It was over.