Last Tuesday, two weeks to the day since she first had the problem with her foot, my daughter came home from school and announced that her foot hadn’t gone cold. She went to her dance class (she’s got shows coming up and I’m now taking the view that if it’s hurting anyway and doesn’t seem to be either her bone or her muscle, she might as well just enjoy herself and dance as well as she can), came home and announced that her foot didn’t hurt any more. She walked on the flat of her foot, without limping. The next morning, she went to school without her crutch , she performed brilliantly in a dance festival and went to another dance class.

But maybe she overdid it or maybe it was going to happen anyway, but her foot went cold again and it was hurting again. It hit her hard. She’d tasted the freedom of being ‘normal’. It hit us too, because we’d thought this nightmare was finally over. She went to school on her crutch again.

The next day, she had her follow-up appointment at the hospital. We were led to believe she would have a scan. There had been talk of both the vascular (blood/ nerves) and orthopaedic teams being involved.

All I wanted was three things:

We went to paediatric outpatients – spacious, cool and quiet – and saw the consultant paediatrician we’d seen the first night we went to the hospital. She checked her feet over thoroughly and asked us lots of questions.

That’s not really what you want to hear from a consultant paediatrician. When we’d seen her initially, I’d felt she was maybe a bit sceptical – that either my daughter or I was being slightly over-dramatic or the GP was being overly-cautious. Her condition wasn’t life-threatening, so she was sent away with a follow-up appointment.

I guess they thought it was run its course, as these things often do.

She said my daughter would see an orthopaedic doctor and have a couple more blood tests. Her previous blood tests had come back clear, which is good news. She didn’t see any need for the ultrasound scan, but maybe she would have an MRI scan at a later date. My daughter knows about MRI scans, because I had one recently. She really doesn’t want an MRI scan and she started to hug me and whisper ‘No, no, I don’t want an MRI scan’.

The doctor said she would come back to see us at the end of the day with a plan. Then we were sent to the paediatric assessment unit to wait for the orthopaedic doctor and the blood tests.

In complete contrast to outpatients, the assessment unit was crowded, hot and noisy. There was very little space and we just had to wait in the waiting area. An endless stream of babies and toddlers came in, cried a lot, and went out. There was a teenage girl and a five year old boy. There were head injuries and asthma attacks. And there was crying. Loud crying. Non-stop. We didn’t have a bed space, so we just sat there, in the heat and the noise, unable to do anything because it was so uncomfortable and noisy. I could hardly hear my daughter speak. 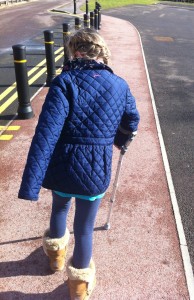 She had the magic cream and waited an hour for it to work. She had her blood tests without making a murmur. We waited for the results, we waited for the orthopaedic doctor.

But I know hospitals. Doctors and test results arrive without warning, so you can’t leave.

The doctor and the test results arrived more or less simultaneously after a two hour wait, in which more toddlers had come, gone, made a mess and cried a bit.

The orthopaedic doctor asked the same questions and checked her foot in the same way. The blood tests were clear. He couldn’t find anything. I told him she’s climbed Snowdon twice, I told him she does four dance classes a week. I want them to realise she’s a healthy, active girl with a life. A girl who can do anything. I want them to know she’s a person, not just a patient who can’t walk very well.

He said he would refer us to his boss ‘soon’ and that she would probably have an MRI scan.

‘They’re exciting! You’ve had an Xray? They’re just like that.’

In the same way that a Sinclair Spectrum is just like a MacBook Air.

The paediatrician didn’t come back. We didn’t get our plan. But we will get a letter soon.

The doctors are taking her more seriously now, but the focus this time was all on the pain, with no focus on the coldness and the nerves/ blood flow. More things have been ruled out, but we are no closer to answers and no closer to my daughter walking again.

Just before bedtime, I found her on her own in her room, crying.

Apparently the paediatrician had used the word ‘long-term’. I didn’t even remember her saying it. My daughter thinks that means ‘forever’, but I said it didn’t, it just means a bit longer. She has been so brave and coped so well all this time, while I have stayed positive for her and worried quietly to myself. I hate to see her in pain and I hate to see her upset. I just want to make it all better for her.