When I signed my kids up to walk part of the Cotswold Way for Emma’s Army against cancer, I told them about it briefly, then didn’t mention it again. I didn’t want to pressure them into it. If they chose not to do it, that would be fine – 8.6 miles is a long way when you’re 8 or 10. But my kids are determined and committed. They got up on Sunday morning and both of the younger two told me they didn’t want to do it. But that wasn’t the same as saying they weren’t going to do it. They then went on to talk to me about the walk and where it went, what they would see and what they would do. They were totally up for it!

The route started where we had finished the previous day at Leckhampton hill. I had been worried about how the kids would cope with a long, steep hill from the car park just to get us back onto the Cotswold Way, but Emma had found a much better car park, which was right on the route. Emma’s Army was much bigger for day 4 – Julie and Katie were still there of course, along with Katie’s husband, and Emma’s friends Dave and Jacque. Then there was my three kids, plus Emma’s daughter, Bunny, who was going to walk the first three miles to Crickley Hill.

We set off up a steep slope, then out into the open, with stunning views of Cheltenham. But wasn’t Cheltenham getting nearer? Shouldn’t it be getting further away? Yes and yes. We’d gone the wrong way. It was only about a quarter of a mile, but we needed to turn round. We were actually supposed to be walking up a road, which was a gradual climb and a bit boring. It seemed to go on forever. I walked at the back with the two little girls, who were chatting away, and kept needed reminding to speed up a bit. The boys were right at the front and I hardly saw them, until we started walking under some trees and they spent a mile or more sticking weeds on everyone. Thankfully, the adults all seemed perfectly happy to have kids they’d never met before sticking weeds on them. 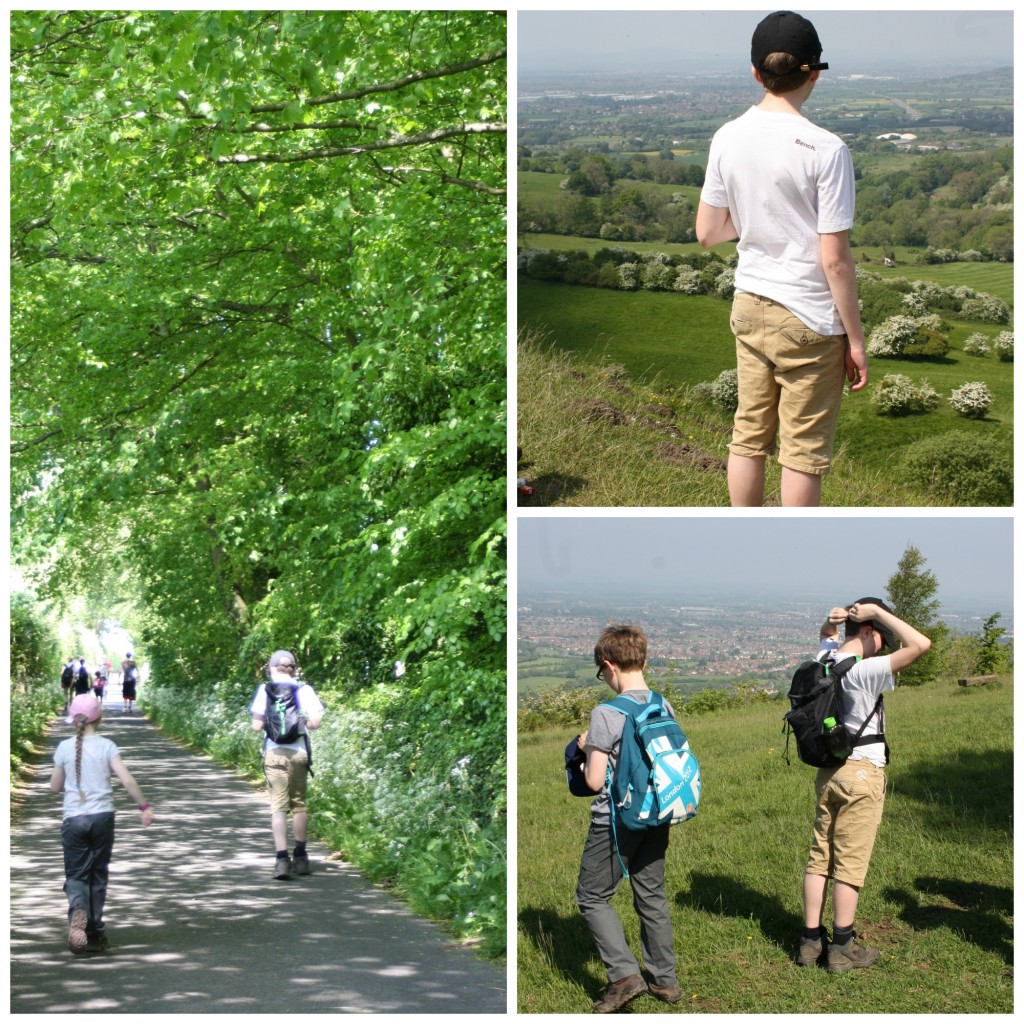 We got to Crickley Hill and saw two amazing sights (three if you count the view) – an ice cream van and a toilet block. Everyone had an ice cream and a wee. Emma’s husband arrived to pick Bunny up, but she didn’t want to go – she was too happy walking. I knew she was keeping my daughter’s spirits up, and that it would be harder to keep my daughter going once she’d gone. So Emma decided to let her stay until the next hill.

The ice creams gave the kids a boost. Suddenly the girls weren’t at the back any more. They were right at the front and running, jumping and bouncing all over the place.

The trail brought us onto one of Gloucestershire’s busiest roads and most notorious junctions, The Air Balloon roundabout. We had to cross one road and walk up the steep path alongside one of the others. I grabbed my daughter’s hand and made sure my younger son was with another adult to cross the road. It wasn’t pleasant walking by the road – it was hot and noisy and the kids were ready for another break. As soon as we got out into the open on Birdlip Hill, they sat down for lunch.

Then it was finally time for Bunny to go home. As predicted, my daughter immediately went downhill (in the metaphorical, not literal sense) at that point. She wanted to go home, she was tired, she wanted to eat, but she wasn’t hungry… I stopped briefly to put her drink away, and the others were gone. It took us ages to catch them. We’d obviously been walking a little slower to make allowances for Bunny and, as soon as she’d left, everyone had picked up the pace. Maybe they didn’t realise my daughter is only a year older than Bunny.

We walked eight and a half miles at Snowdon, but I’d forgotten the minor detail of the mile and a half my daughter had done on Daddy’s shoulders. But Daddy and his shoulders weren’t there on the Cotswold Way. So Emma very kindly arranged for my daughter to ‘borrow a Daddy’ and she had two piggybacks from Dave, which helped her to recharge her batteries and lift her spirits. 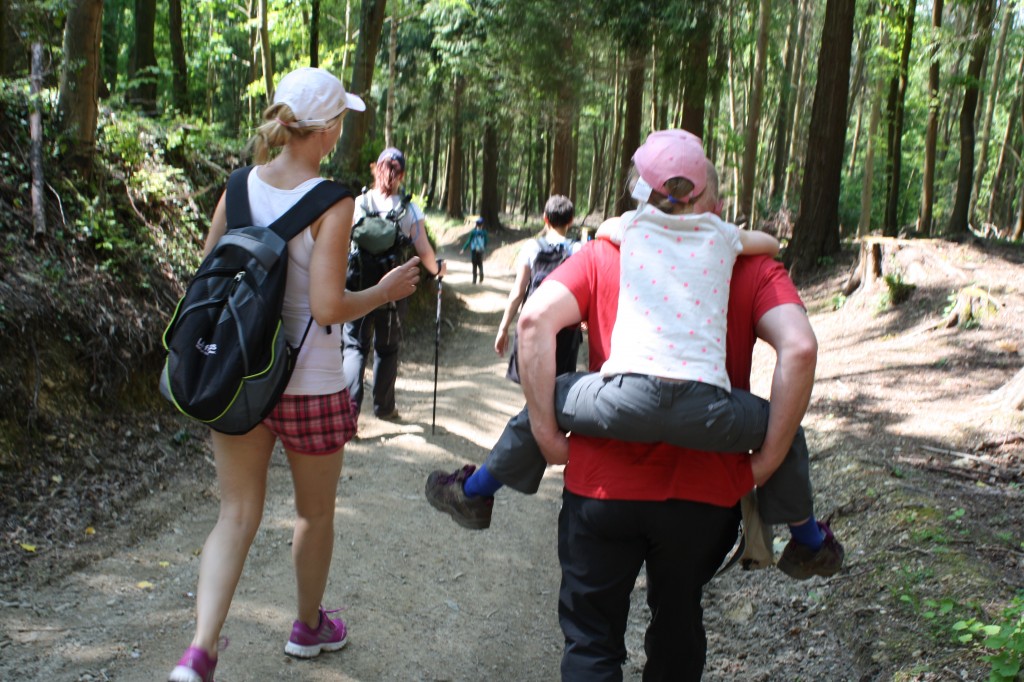 The person I thought would struggle most was my younger son. He was so upset by the sheer height of Snowdon that he’d been too frightened to make it to the top. He’d also moaned for the entire duration of a three mile walk we’d done over Christmas. I knew he could do the distance physically, but I thought he would be bored and that would make it hard for him. How wrong I was! From when we dropped Bunny off, I only saw him as a spot in the distance. He led the way from Birdlip Hill to the end of the trek at Coopers Hill.

The last leg of the trek was very muddy. The mud was impossible to avoid. Two years ago, mud had made my daughter cry but now she was embracing it – happy to walk through it rather than try to get round it. And then we came out into the open and there were houses! We were reaching civilisation – the end was in sight.

We finished at a little car park on Coopers Hill (home to the world-famous cheese rolling). My 8 year old and 10 year old had walked 8.6 miles, plus a bit extra where we went wrong, on a hot day. My 12 year old had walked nearly 20 miles over the weekend. It was a fantastic achievement. I couldn’t have felt more proud of them.

I am in awe of Emma, Julie and Katie who are walking every day until Saturday – 10 days and 104 miles – all the way to Bath along the Cotswold Way. 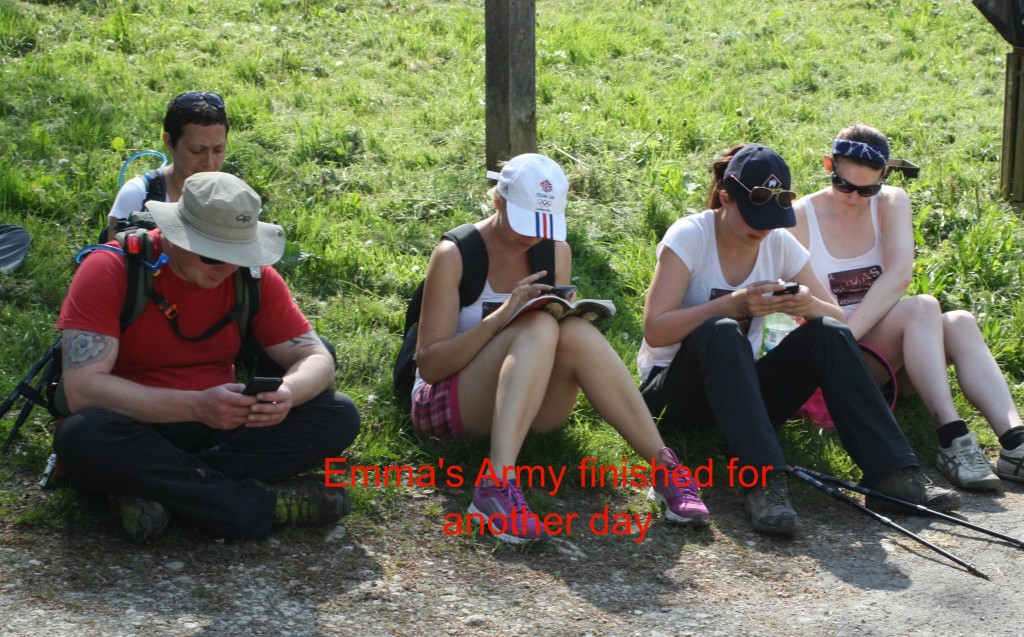 It’s not too late to sponsor us! If you think what my kids did was amazing (I know I certainly did!), we would be very grateful if you could spare a £ or two for Cancer Research UK. You can sponsor us right here http://www.justgiving.com/MumofThreeWorld

If your kids or you have achieved anything to be proud of lately, please link up your posts below.