When I signed up to walk part of the Cotswold Way for Emma’s Army against cancer with my friend Emma Crazy with Twins to raise money and awareness for Cancer Research, I decided I wanted to walk two days and I wanted to walk with the kids. Looking at the dates, locations and distances, it all worked well for us. The route closest to home fell on the first weekend – and also included the shortest day on the Sunday. My eldest, the intrepid Scout, will walk and climb forever. He is the boy that climbed Snowdon twice on our recent trip, so I signed him up for both days and the other two for the Sunday. Walking 8.6 miles is a long way when you’re 8, but my daughter managed Snowdon and she’s fit and healthy, so I guessed she could do it.

The weekend dawned hot and sunny. It felt terribly un-British to be preparing for a day in the countryside and not packing any waterproofs or jumpers. My son and I slapped on the factor 50, along with our hats and sunglasses and met the rest of Emma’s Army at Cleeve Hill. It was day 3 of their trek. Julie and Katie are walking the whole route with Emma. Julie has only recently finished cancer treatment herself. She wanted to do something positive towards cancer research this year, and decided to join Emma’s Army after following Emma on Twitter. She travelled over from Essex especially to walk the Cotswold Way. Katie is a friend of Emma’s who decided she’d like to walk the whole route. All three of them were in good spirits, but already niggled by minor injuries. 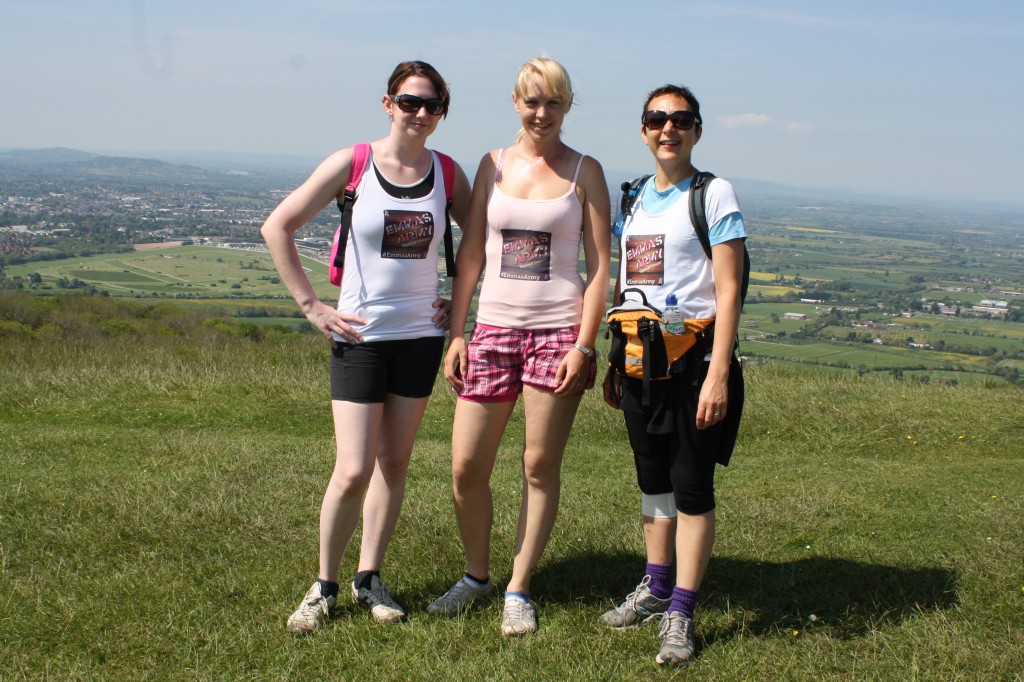 We set off up Cleeve Hill in the sun. The views over Cheltenham and into the distance to the Malverns and beyond are stunning. The walk took us up hills and down hills and along quite flat (but high) paths. We walked out in the open, across fields and down narrow paths. There were signs pointing the way and Emma also had a very (possibly too) detailed book telling us where to go – and lots about history and wildlife. We walked into Prestbury Hill Reserve, which boasts huge numbers of butterflies. We tried to find the wild garlic the book told us was growing – and once we’d found it, it was everywhere. There were endless dandelions, lots of stinging nettles and wildflowers. We walked under pylons that buzzed and past sheep and lambs that stared at us. 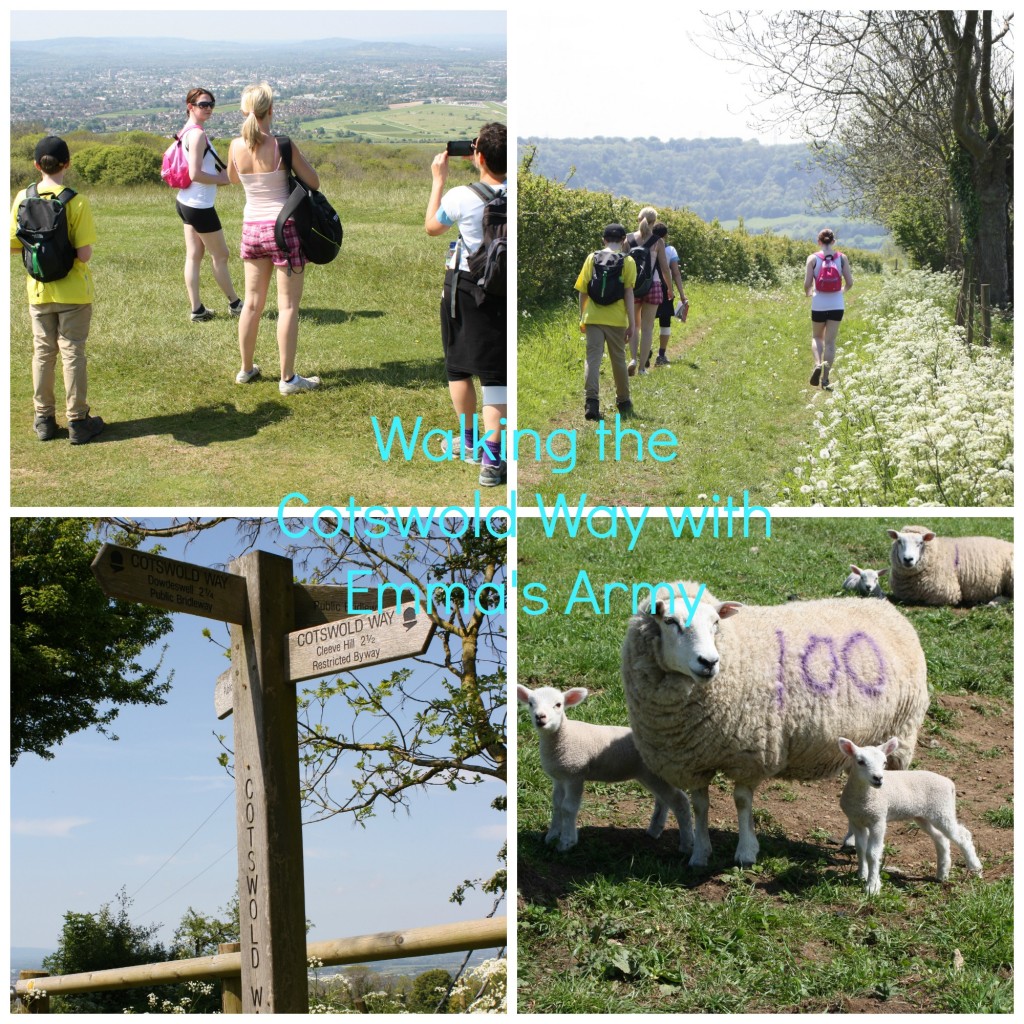 It was lovely to walk with my son. At home, he can be somewhat awkward. It’s his age of course, but he’s constantly competing with his brother and sister for attention and trying to get them into trouble. But when there’s just him, he’s a completely different person. He’s much more calm and grown up. He will talk sensibly or he will walk happily in silence.

The first mile and a half seemed to take forever, the next four miles went quickly. The halfway point was Dowdeswell, beyond Cheltenham on the main road to Oxford and London. It seemed crazy to me that a journey which is quite long by car is only five and a half miles as the crow flies. There was a restaurant on the main road and they kindly let us use their toilet. Then we had our steepest hill of the day. It was hot and we were all tired and sweaty, but we pushed ourselves up this hill. Then we reached a field of long grass that was too inviting and had a  sit down. We hadn’t stopped for lunch, and this was our longest break of the day. It was also where Julie realised she’d lost her phone. She was pretty certain where she’d lost it (at the bottom of the very long hill) and the thought of walking back and up again was too much. We trusted that walkers would be good people who wouldn’t nick it and she decided to go back in the car and get it at the end of the walk. 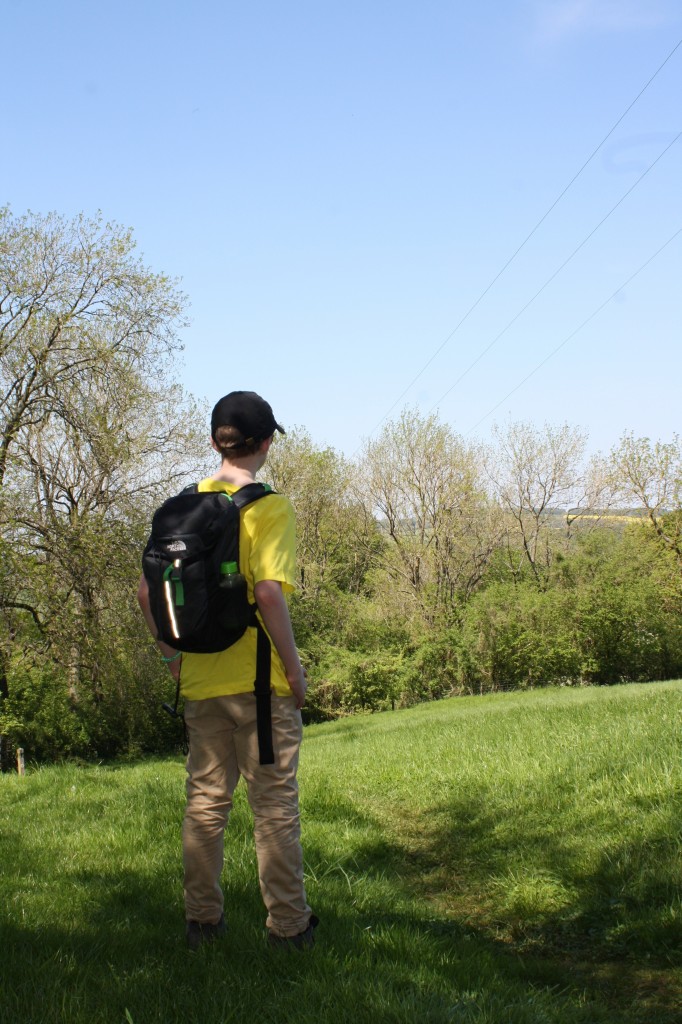 Then it was back to walking – we still had another steep hill to tackle. Emma had arranged for her eldest daughter, Bunny, to meet us for the last two miles. She also asked her husband if he wouldn’t mind looking for Julie’s phone – and he found it! We met Bunny on the roundabout of a main road on the route. Emma was worried she would be slow, but her fresh legs were easily a match of a group of people who’d already walked eight miles. She strode on ahead and chattered away happily, lifting everyone’s spirits.

We finished the walk at Leckhampton hill in the bright sunshine, with more beautiful views of Cheltenham.

The only downside was that the Cotswold Way is high up in the hills, a long way from the road, and we had to get down to the road to get back to the car. It was a long, steep walk down, adding almost a mile to a 10.2 mile walk. I was worried walking up this extra mile would be too much for my younger kids starting the walk the next day.

It had been a long day. Challenging and enjoyable. I was looking forward to the next one.

It’s not too late to sponsor us! Emma’s Army is aiming to raise as much money as possible for Cancer Research. If you would like to sponsor my kids and I, you can do it right here! http://www.justgiving.com/MumofThreeWorld