My family has conquered Snowdon! Did we enjoy it? Not that much. Will we be doing it again? Not necessarily. Do we feel proud? We most certainly do.

It was a long, tough day and I felt so proud of my kids and myself for different reasons.

We started the day parked at Pen-y-Pas at the foot of Snowdon. From there, there are two main tracks upwards – the Pyg Trail, which is steeper and more difficult, and the Miner’s Trail, which is supposedly easier. I’ll be honest, I’d been a bit nervous about Snowdon, but my husband had assured me it was no big deal and that I would love it because I love walking, exercise and beautiful scenery. My husband and son had done the more challenging Pyg Trail the day before, going up and down in just three and three quarter hours. We were doing the Miner’s Trail as a family and had warned my eldest that the pace was going to be a lot slower.

It was a beautiful sunny day, quite cold, but with no threat of rain. It was pretty much perfect for conquering the highest mountain in Wales.

The Miner’s Trail starts with a bit of a slope, then it goes round a bend and even downhill a bit and you come across a really beautiful blue lake. You go round the lake – this is amazing! You’re going up a mountain, but it’s like you’re not going up a mountain at all! It’s just flat! How good is that? The peak of Snowdon is visible in the distance and it’s getting nearer. It’s all going rather well. 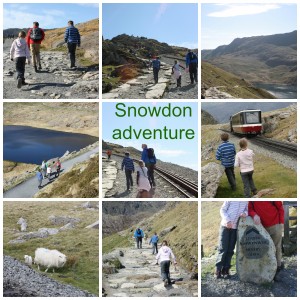 The boys and Daddy were walking ahead and I was walking at a slightly slower pace with my daughter. We came across some giant cobbles and we started to climb gradually. She informed me her legs were starting to hurt and I thought we still had a long way to go. But it was OK. Bitesize chunks. We just had to get up. We could do that. Then coming down would be easy.

We came across another lake and it was all very beautiful. But what were those people doing? Were they CLIMBING UP ROCKS?! It was very steep. It wasn’t a pleasant walk. They were properly climbing. And we had to properly climb too. And the peak wasn’t getting any nearer.

We started climbing and my husband took over looking after my daughter, holding her hand as she climbed the rocks. My eldest is like a mountain goat – he has endless stamina for climbing things and walking. My younger son started getting a bit wobbly and, to be honest, so did I. We were getting higher and higher, we were having to hang on with our hands, it was narrow and uneven and there was a flipping great drop below us. Then things would ease off a bit and we would come to some stone steps before it was back to proper climbing. Frankly, I was terrified. I would never describe myself as being someone who is afraid of heights, but I wasn’t looking down.

I was supposed to be loving this – enjoying the walking and the beautiful scenery – and all I could think of was that I was hating every minute and I just wanted it over.

I’m claustrophobic and my fear is not being able to escape from a situation, whether a locked toilet, an aeroplane, a lift – or the side of a mountain. I might have been out in the fresh air, but there was no escape.

I didn’t tell anyone I was feeling like this, but my eldest sensed it. He held my hand as we walked up some of the difficult bits. Anyone looking at us would have thought I was looking after him, but it was the other way round. I really appreciated it.

We were having frequent stops for drinks and snacks. We had three rucksacks and the drinks and snacks were divided between them. My husband was getting cross with me for ‘stressing’ about the whereabouts of the Mars Bars and who was carrying my daughter’s Lucozade or my son’s water. It wasn’t easy to keep track of it all with worrying so much about falling and the long walk. I must admit I shed a couple of tears behind my sunglasses because it all got too much.

And still my eldest walked on and so did my daughter. I was in awe of her. As soon as we started climbing, the adrenaline just kicked in. Her legs just kept on going and she was really enjoying the experience. And she LOVED looking down.

My younger son was getting more wobbly by the second. He couldn’t look down. But rather than not look down (as I was doing), he kept looking down. And still the summit didn’t seem to get any closer.

My husband kept telling us it wasn’t much further, but it still looked a long way. The Miner’s Track met up with the Pyg Track as we approached the summit. Apparently the Pyg Track is steeper and shorter, but doesn’t have the really horrible climbing bit towards the end, so we decided we would go down that way.

Then we got to the top and there was a nice wide bit to walk along to get to the summit. But my younger son was in bits. He was crying and saying he wanted to go back. It was too high. We were going to fall. The wind was going to blow him off.

No amount of reassurance was going to move him and in the end my husband had to stop with him while I carried on right to the top with the other two. My eldest offered to take my daughter up the steps to the trig point to save me the stress, which was so kind of him. But when we got there it was so crowded with teenagers taking photos and hogging the space that we decided not to risk it. It looked too scary. So we ate half a Nature Valley bar and the kids ate a couple of Haribo (we had loads of snacks, but we didn’t actually have any LUNCH, having had no opportunity to actually buy any sandwiches) and we went back down. It had take us three hours and 10 minutes to reach the summit. As we walked down the steps from the summit, I realised I wasn’t the only one holding my daughter’s hand. With no Daddy around, my son had taken on a protective role and my heart nearly burst at the sight of him holding his sister’s hand.

We’d been gone 20 minutes and my son was still crying. He was in a real state, begging to go home. Not just to the hotel, but HOME. He was refusing to eat or drink which was no doubt part of the problem and nothing could calm him down – not even talking about Minecraft. I was worried he was going to have a full-blown panic attack right there on top of the mountain.

There was no way we could get him down the Pyg Track, so we just decided to follow the railway, which is the most gentle way down of all. But also very long and very slow. My son held my hand (very unusual) and ranted and cried until he saw some snow. Then he ran off to make a snowball and he was back to himself. He ate a Mars Bar and normality was restored. 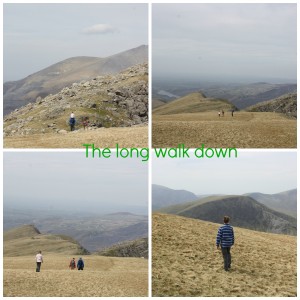 Did you see Nativity 2 when they trekked through those mountains endlessly? Following the railway down was just like that. Bleak scenery going on FOREVER.

There was a cafe about halfway down. It had no electricity and no toilets, but some of us picked up some cold snacks from there. My younger son wouldn’t go inside – he said he wanted ‘some fresh air’ – like he’d had for the last five hours.

Suddenly my daughter announced that she was cold – despite wearing a hoodie, a thermal base layer and two Tshirts. Her skin was really cold to the touch and she looked pale. I put my own thermal base layer over all of her clothes and stuck her woolly hat on her head. And she didn’t complain! My daughter hates any clothes that don’t look perfect and wearing my clothes, especially over her own would be a complete no-no. So she obviously wasn’t herself. So she pretty much rode on Daddy’s shoulders the rest of the way. I have no idea how he did it.

The surface was very rocky and it was starting to hurt our feet. I walked with my younger son and he’d had enough. It felt like he’d been walking forever and everything hurt. And still my mountain goat kept walking. He has so much stamina and he absolutely loves climbing and hiking. My younger son is all about the quick wins – run fast, score a try, score a goal.. He doesn’t have the stamina or commitment for walking and climbing. My daughter is dedicated and committed and she won’t give up – whatever she’s doing and however much it hurts (or however cold she is).

My son got excited at the sight of ‘a real wall’, then a fence because it showed signs of civilisation and that we were nearly down. Then there was a house in the distance, a gate and, oh joy of joys! A tarmac road. We’d made it!