We celebrated our 1st wedding anniversary by leaving our 11 day old baby at home with my parents while we went out for lunch at the restaurant we’d been to the day after we’d got married.
Breastfeeding wasn’t even established and of course he had no sort of routine, so we left him with a tiny bottle of expressed milk (which I’d sweated blood to get out) just in case he needed it in the hour and a half we’d been gone.

Since then, we’ve got a little bit more ambitious. It started a few years back when we watched I’d Do Anything, the TV search for a Nancy and Oliver for the new West End production. We decided we’d like to see the show. It was booking for over a year ahead, so we booked it for our wedding anniversary the following year. Then, inspired by this revolutionary idea and not wanting to wait a whole year, we booked Joseph with Lee Mead (yes, we were quite keen on TV talent shows at the time).

So that’s become our tradition. In addition to those shows, we’ve seen Legally Blonde and War Horse. We go to London for the day on the train and we just enjoy the peace. My husband is a bit of a workaholic works very hard, so likes to take his work on the train. You might think I would find this annoying, but I don’t. Because I actually like to read on the train and it’s not often I get the opportunity to sit down for a nice long read. 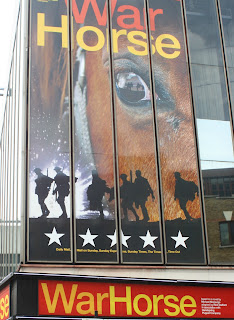 We go for lunch and dinner at places we don’t have at home. Nothing spectacular and out of the ordinary, just places we can’t visit usually – I like Leon for lunch and Wagamama for tea. Even if we had a Wagamama at home, we’d never be able to go with the kids because they’re way too fussy.

It’s our wedding anniversary this week (13 years!) and I thought we weren’t going to get our special day out. We’d had a very exciting and busy June, which included travelling to London to see a show. We’d had my husband’s 40th and our night out to see The Levellers, we went to see Billy Elliott and to Legoland with the MAD Blog Award finalists, I went to Britmums Live and performed in a dance show. In short, it had been a really good month – and a pretty expensive one at that. I felt that maybe we shouldn’t have our day out this year, maybe we’d already had too much fun.

Then at the last minute, we thought why not? We were going to book for Wicked, but decided to go for Charlie & the Chocolate Factory, on the basis that my daughter, who is very keen on West End shows, has a ridiculous phobia about it and would never want to go and see it.

Booking that day off work and knowing we’re going to have that lovely day is something I’m so excited about – I’m just as excited about the reading on the train as I am about the show! It’s the break and the peace which mean as much to me as anything else. When you’re as busy as we are all the time, these little things make a real difference.

Happy anniversary to us!