Why do we eat meals? Is it so we can grow and be fit and strong? Is it so that we have enough energy to get us through the day? Is it to keep us healthy? Is it just for the sheer love and taste of food? Or is it all of these reasons?

No. It’s none of them. It’s so we can have pudding.

That is, of course, according to my 7 year old daughter.

I have never known anyone quite so obsessed with pudding as my daughter. Many of us have a sweet tooth (the rest of my family included), but hers goes beyond that. It’s like life is an endless mission to get more pudding. Even though she knows the answer will be ‘no’, she keeps on asking anyway. 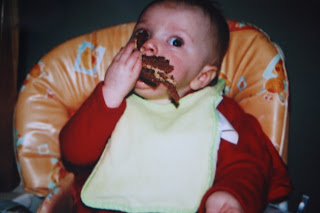 Her first taste of pudding – her own 1st birthday cake.
From there, there was no stopping her… 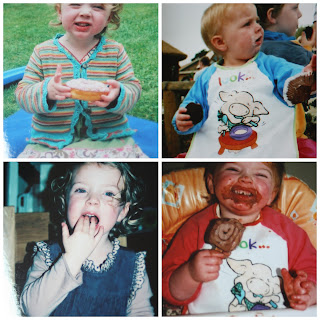 Her sole reason for eating is meals is to earn the right to have pudding. I’ve explained to her so many times that she needs to eat the food because it’s nice and it’s good for her and it helps her to grow, but all she does is stop every few mouthfuls and say ‘Can I have pudding now?’

Her meals are half the size of her brothers’, yet her puddings are the same size. Why is this? Why is her appetite so tiny that she can only manage a small meal, yet a full-size cake, chocolate bar or ice cream are no problem for her at all?

The pudding obsession started early. As did the not-eating-very-much thing. She was late to talk, but she sure understood what people were saying around her. My boys used to love Yorkshire puddings. But we had to ban the word. As soon as someone said ‘Yorkshire pudding’, my baby girl, not yet able to speak, would forcibly plonk her cutlery down and push her plate away. We’d said ‘pudding’, it was time to stop eating! So Yorkshire puddings were re-branded in our house as simply ‘Yorkshires’.

Six years on, she knows the difference between a Yorkshire pudding and an ACTUAL pudding, but she still plonks her cutlery down and pushes her plate away as quick as she can when someone grudgingly agrees that she has eaten enough for pudding.

Then she finishes her pudding (always asking for slightly more than she’s allowed, just in case she catches me off guard) and 10 minutes later she says, ‘Can I have a Frube?’