It’s finally happened. It’s taken nearly 12 years, but last night I became an embarrassing mum.
I’ve always been quite proud of getting this far without becoming an embarrassment to my kids. I dress reasonably cool and I’m relatively young compared to most of my boys’ friends’ parents. But I know deep down, the reason I hadn’t become embarrassing before was because I have boys, and boys don’t tend to get embarrassed by their parents so early.

Yesterday was my husband’s 40th birthday and it just so happened that my favourite band of all time,  The Levellers, were playing locally. It was too good an opportunity to miss! I’ve seen them around 30 times since 1992 and I introduced my husband too them pretty early on, so he’s probably seen them 20 times. What better time to introduce my boys too? (Although we did take my eldest to watch them in Birmingham a couple of years ago.) 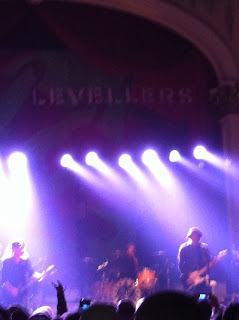 We stood near the back, because we had two kids with us after all. Back in the day, I’d have been right down the front. The Levellers started playing and I started dancing. Full-on. Because that’s how I dance. As my dance teacher says (nicked from Will I. Am), go hard or go home. 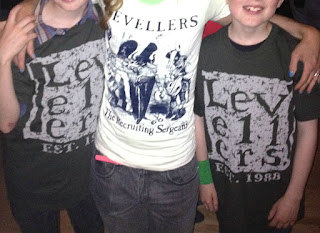 Me and the boys rocking our Levellers Tshirts

Strangely, it wasn’t my oh-so-cool year 7, who I regularly clash with, that was embarassed. He’s quite proud of me and my quirks – my running and my clothes, along with my relative youth and size (he’s getting to the image conscious stage). He’s proud of my blogging now, although mainly due to the increasing amount of Free Stuff coming into the house. He was even proud of me going into school for the whole of year 5 and reading to his class in comedy, very loud voices.

It was my lovely, calm, happy 9 year old who was embarassed.

‘What are you doing?’

‘Well, stop. No-one else is dancing.’

He shouldn’t have been surprised. Dancing is not considered embarrassing in our house. I go to a dance class. I perform in a show once a year, with the odd flash mob and Christmas lights switch-on along the way. And I dance at home – for fun, to practice my routines for class and on Wii Just Dance.

But I shouldn’t dance in public. In a room full of people that we don’t know. Most of whom aren’t dancing.

Every time I looked at him, he shook his head at me and told me to stop dancing. And I smiled at him and carried on. I didn’t want to embarrass him, but I literally couldn’t stop. And, besides, I was having the best time and kids need to know their mums can have a good time.

People around me – the ones swaying gently or not dancing – who probably also have 9 year olds at home were looking at us and laughing. They were on my side.

‘What is this anyway?’ said my eldest, ‘Freestyling?’ Yes, freestyling. In my day, it was just called dancing. He was proud of me again, because he doesn’t mind his mum dancing (and wearing the first band Tshirt she’d bought in 15 years) and also any chance to annoy his brother is good. By supporting me and my dancing, he was annoying his brother. 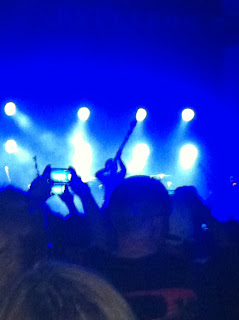 Towards the end of the concert the classic Levellers digeridoo man came on for This Garden and, of course, One Way. The crowd went wild. I looked up at my 9 year old son and he was dancing and clapping.