It may surprise you to discover, considering I’ve been running for 27 years, that I’ve never run a 10k race. To be honest, it’s never appealed to me. To me, races should be a challenge, and running a distance I run weekly for fun (in addition to various other distances including 10 miles) doesn’t seem like a challenge.

Plus, races aren’t cheap. So if it’s not a challenge, why would you spend £30 (prices vary, but you get the picture) on running a distance you can run perfectly easily?!

But we haven’t run any races for a really long time. My last one was Stroud half marathon in 2019. I did the Cheltenham Challenge virtual half marathon earlier this year. I enjoyed it, but it was virtual.

No crowds. No other runners. No buzz.

So when my brother-in-law suggested Gloucester 10k, I jumped at the chance. Now, between you and me, Gloucester isn’t the prettiest of places. But it looked like the organisers had pulled together a scenic route.

It was only a few days before the race, that I appreciated the challenge.

10k isn’t 5k (aka parkrun) and it isn’t a half marathon. It’s somewhere in between.

And if I wanted to do well, not just plod round and finish it, I needed to find that magical pace halfway between a parkrun and a half marathon.

The closest I’ve come to a 10k race is doing the new year double parkrun, which I did in both 2019 and 2020. Having a break between runs meant I could run the second parkrun just as fast as I ran the first one. So, theoretically, I could do 10k in just over double my parkrun time.

When I run six miles in the week (10k is 6.2 miles), I usually do it in about 52 minutes. I knew I wanted to do Gloucester 10k in under 50 minutes. I decided my tactic would be just to set off as though it was a parkrun and keep running fast until I couldn’t run fast any more, then slow down a bit. So, the other day, bright and early, my husband, brother-in-law and I lined up in Gloucester park for Gloucester 10k. We had just the one supporter willing to leave the house before 7.30 on a Sunday morning – my daughter.

There were 950 places and, while some people had chosen to do the race virtually, there were a lot of runners in the park. But it was all well organised and not crowded. Toilet queues were relatively short and everyone was sensible about keeping their distance.

It was a staggered start in waves of 50, starting with the fastest runners. Based on our estimated times, my husband was in the second wave and my brother-in-law and I were in the fourth wave. With only 30 seconds between the waves, it didn’t feel much different from the start of the Cheltenham half marathon, as it was only a minute and a half until we crossed the start line.

As ever, my brother-in-law said ‘good luck’ and then I didn’t see him for dust. We did a small loop of the park on rather slippery grass, then we were out of the park and running along Southgate Street, parallel to Gloucester Docks. It wasn’t long before my pace was starting with a 7, but I felt relatively comfortable.

We looped around a bit by the cathedral to take in the best views, so there were some tight bends and some uneven surfaces to contend with. I felt like I’d only just started running, but there was the 2k sign!

Then we ran back along Southgate Street, with the slower runners still going in the opposite direction. Then it was through the docks properly, and my daughter was there to cheer us on. I was glad she’d found her way over there in time to spot us all. There was one stretch of the run which wasn’t so scenic – a long and boring road, which we were running along for maybe a kilometre. I spotted my brother-in-law in the distance for the first time.

After the boring road, we joined the canal, which we then ran along all the way back to the city. It was very scenic, with lots of lovely houses. I got closer and closer to my brother-in-law, until there was just one person in between us. At around 7.5km, I overtook him. (It turns out he’d run his first 5k in faster than his parkrun PB, so needless to say he couldn’t sustain that pace.)

The time and distance had just flown by, but I was starting to feel more tired at this point. We were lucky with the weather, which was cloudy and dry. It was a bit humid, but it could easily have been very hot sun – and we missed a torrential downpour by just a few minutes. The route took us back through the docks, and there was my daughter again! I was aware that we didn’t have far to go until the end, and hoped she would make it back to the finish line on time. There was a bit of an uphill at 9km, before a small downhill to take us back to the park. The last 400 or 500 metres were familiar from those two New Year’s Day parkruns.

My husband finished three minutes before me and my brother-in-law a few seconds behind me. We were all knackered and agreed it was pretty tough. But we also agreed we would do it again next year – and my sister and daughter want to join us too.

I really enjoyed my first 10k and would like to say a big thank you to the organisers and the many volunteers out on the course. 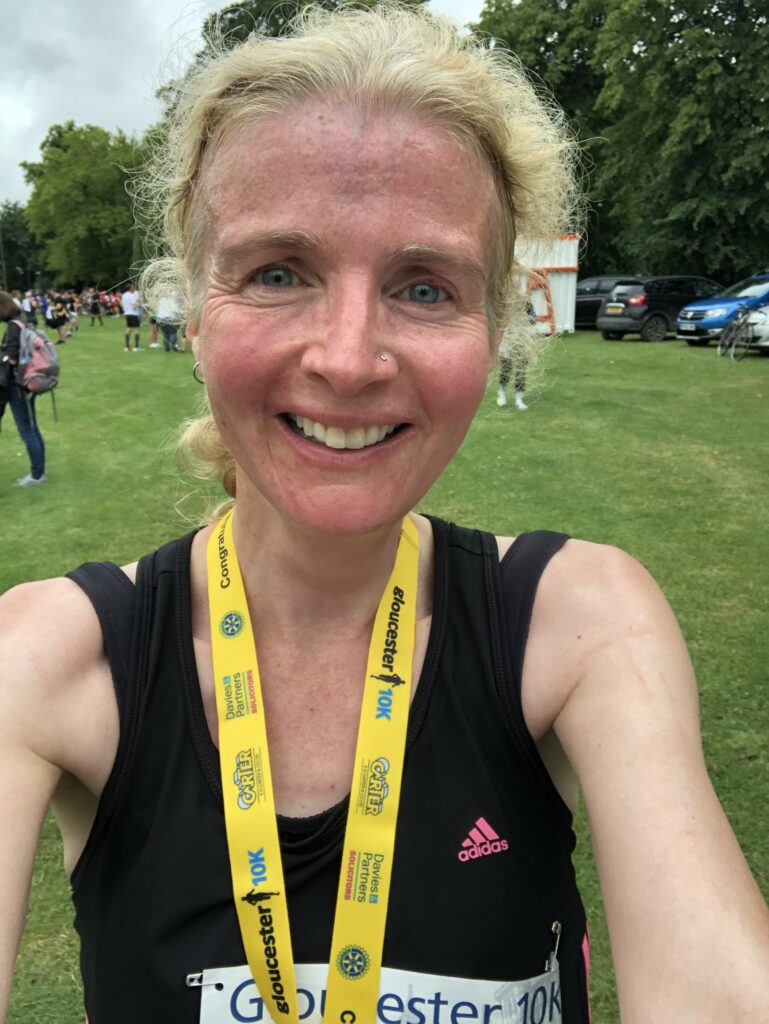