Although I write a lot about running, I realise I’ve never written about my running journey from the start, particularly the early years. I’m proud of the fact that I started running in 1994 and have never given up. Although in those early years I didn’t run a fraction of the distance I do now.

It was my husband who persuaded me to start running in 1994. I was 20 years old and still at university. He’d been at work for a year and his Mars Bar habit combined with being more inactive than he was as a student meant he was gaining weight and wanted to get that under control. Our first run was probably a mile and I had to stop and walk twice. I hated it.
But after two or three more runs, I started to like it, then to love it. Before I knew it, I was running around two and a half miles most mornings of the week. Interestingly, while I kept going for all those years, my husband stopped and started running many times over the years.
A year after that first run, my husband and I ran Nottingham half marathon. We put to the test the theory that you could run a half marathon if you could run eight miles. You could, but it wasn’t easy! We ran it in exactly two hours and it was hard. A year later, we trained up to 12 miles and managed to knock three minutes off our time. It felt a lot more comfortable too.
Then I moved to London to work for a couple of years and there were no more half marathons for a really long time. But I still fitted in two and a half miles most mornings.  From London, I moved back home to Gloucestershire. I was working full time, but still managing to run nearly every morning, until I got pregnant with my eldest in 2000.
I stopped running for my three pregnancies and for the first couple of months after giving birth, but I always went back to it. Although with small children at home and a full time job, I was down to two runs of about a mile and a half a week. When my daughter started playgroup in 2008, I increased this to two three mile runs a week.
When my daughter started school in 2010, I could finally run more again and trained up for Bath half marathon.

From when I started running right until when I started training for Bath half marathon, I never had ‘proper’ running clothes. In those days, you could only get them from proper sports brands and for a student, then someone on a low paid job, then a young mum without much money, that wasn’t affordable. So I ran in band T-shirts which had worn out and were too faded to wear in the day, along with cheap cycling shorts or joggers from the supermarket. My earliest pair of cycling shorts was actually a pair of leggings I’d cut down as they had a hole in them.

In March 2011, nearly 17 years after I’d started running and 15 years after my previous half marathon, I ran Bath half marathon. I scraped over the finish line in 1:59:54 – those six seconds were very important to me!

My early days of running go to show that you don’t have to run a lot to be a runner and you don’t need to be running a half marathon or a marathon within a year of starting to run. In fact, you don’t ‘need’ to run a race ever. Just getting out of the door and running makes you a runner and it is all good for your mental and physical health.

Running when you have small kids at home is hard as you just don’t have the time to do it. If you’re only running a few miles now, hang on in there, it gets so much easier when you can leave your kids at home. It certainly did for me!

You can read about that next…

I was inspired to write this post by my friend Joy aka Pink Oddy. She is running a series of inspirational runners’ stories and was kind enough to feature me. When I wrote out my story, it was too long for her, so I thought I’d use the long version myself! 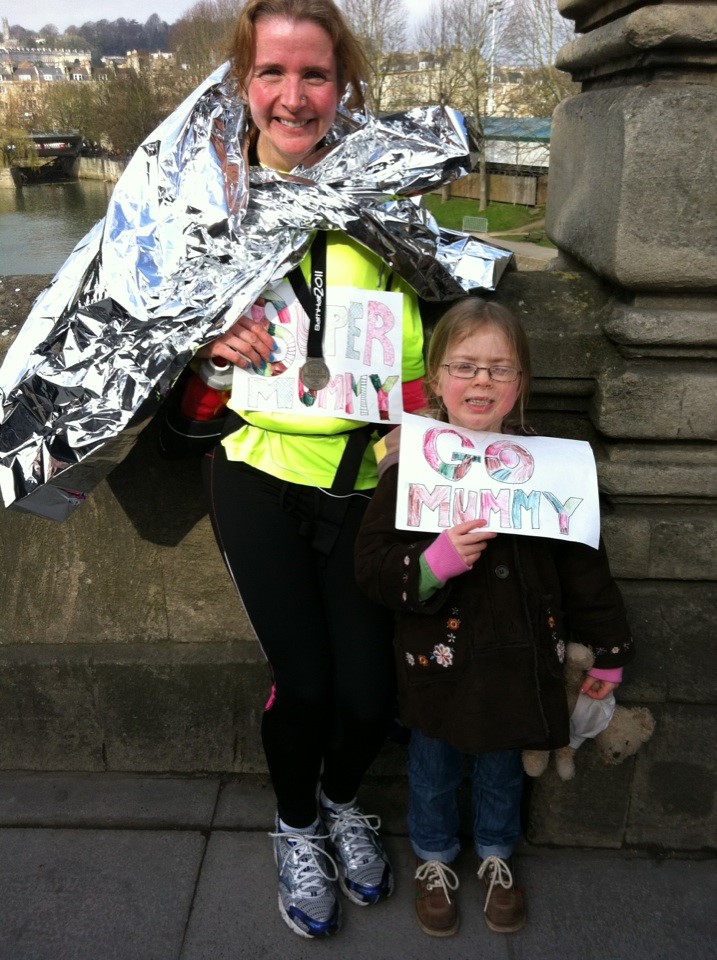