The importance of sport for kids

Home » Family » The importance of sport for kids

Many, many years ago, before we even had kids, my husband said: ‘When we have kids, we will make sure they do lots of sport’. And I thought yeah right, whatever…

His thinking was that sport would keep them out of trouble as teenagers. Teenage trouble hasn’t been an issue for us, but then again, my kids do a lot of sport…

It turns out my husband was absolutely right all those years ago. Sport has been the making of my kids. It has given them so much. Much, much more than I ever would have thought possible.

Sport is good for us as a family. I believe we spend more time with our teenagers and have a better relationship with them because of sport. If they’re not running or walking with us, we are supporting them in all they do. We are taking them to training and going to watch competitions. We are talking to them about their dreams and their goals and helping to make them happen.

We didn’t push the kids into sport from a very early age. My younger son did pre-school football, then he didn’t do any for a few years. He started playing club football and rugby when he was 7 (he might have been 6 when he started football). My daughter started street dance at 4 and ballet at 6. (Anyone who doesn’t believe ballet is a sport really knows nothing about ballet).

The least sporty of my kids is my eldest. It may or may not be a coincidence that he started rugby at 10, so was already a bit behind the others. He stuck it out until he was 14. But despite that being the only organised sport he’s ever done, he has remarkable endurance and stamina. He did a 30 mile walk on a Scout camp when he was 14, the Three Peaks when he was 16 and ran Cheltenham half marathon when he was 17.

After playing football and rugby for many years – often up to five or six days a week playing one or other of them – my younger son is now focused on his athletics. Although he would definitely still play football or rugby for the school if he ever gets the chance again!

After years of ballet, my daughter has made room in her life for athletics too.

In non-Covid times, my son will do athletics training at the club three times a week, plus whatever school sport is on offer.

My daughter has three dance classes a week – two ballet and one tap/ jazz, plus one or two athletics sessions at the club.

But it’s not just about the organised sport. My kids are active and competitive all the time, even when they can’t train and can’t compete. I hear and read so much about kids being inactive in lockdown, of teenagers who literally don’t leave the house for weeks (despite having no medical condition to keep them at home). And my kids aren’t like that at all. Sport and activity is in their blood. (Dr Juliet McGrattan has written a really important post about the importance of movement for teenagers in lockdown.)

They’ve grown up with sport and activity and movement and they’re not going to stop because we’re in a pandemic.

I read a lot about kids struggling with lockdown – and that is perfectly understandable. My kids miss school and their regular activities, but being motivated to stay active at home is really helping them.

My son still does sprints training in the road two or three days a week. He does a Zoom yoga class with his dad once a week. He runs a couple of 5ks a week – including our family (not)parkrun. He lifts weights at home. 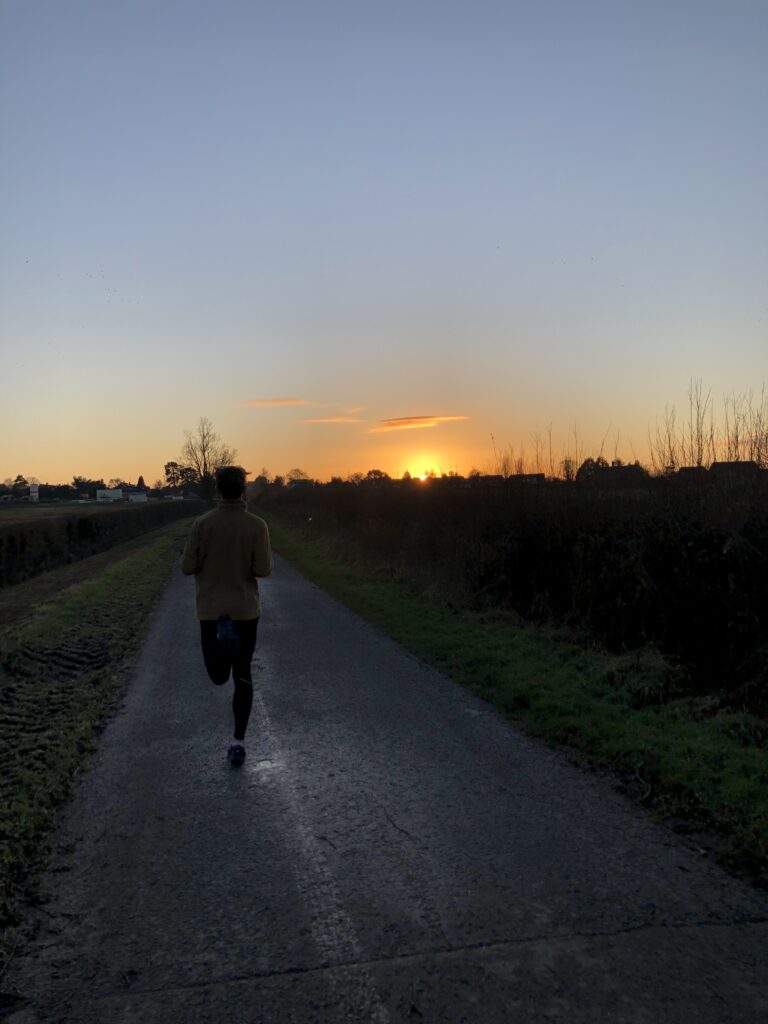 And he walks a lot with my daughter.

My daughter embraces school PE challenges. She does fitness and stretching routines at home and has choreographed a dance for her school house dance competition. She has just started the family (not)parkrun again after a few months off and cycles with my husband and I when we go for a long run on a Sunday.

My son is determined that when athletics training and competitions, plus his Youth Talent Programme, come back that he will be ready. Ready to jump, ready for a PB, ready to work towards school and club records.

I love how active and determined they are and I love the things they embrace. I celebrate every victory with them, however big or small. My son has an obsession with jumping up and hitting branches on trees while we’re out. That’s probably not ‘normal’ 17 year old behaviour, but I love it as it is a part of him. To be able to jump long, he needs to jump high too. He’s always saying ‘Do you think I can hit that branch?’. And if he doesn’t hit it, he tries again. And again and again until he does.

The other day he showed me a yoga/ gymnastics move that he’d been practising for three days before he perfected it. For a skinny 9-year-old girl who did gymnastics, it would have been nothing. But for a 17-year-old boy who has had real problems with his flexibility in the past, it was a massive achievement.

So it turns out that my husband was right all of those years ago. Sport is important for kids. We didn’t force them into it, we just gave them the opportunities and they ran with it. They chose their own direction, they stuck with it and it has given them so much.

Fitness, strength, passion, determination, competitiveness. What more could you ask for? Photo by Massimo Sartirana on Unsplash