After a 2020 summer athletics season with nothing, my son finally made a return to long jump the other day. All of the big competitions have been cancelled this year and there was nothing happening locally. He spent his time scouring the internet for small competitions within a two hour radius of home. But most only had six places for long jump in total (across all the age groups) and they kept filling up instantly. Instead he did 100 metres at a competition, before finally finding somewhere to jump at Loughborough.

The competition was an open, which means anyone can enter (no qualifying standard). Many of the open events are run by standard rather than age category – so a 200 metre race could have a mix of boys, girls and senior athletes who all run at a similar pace. The competition was run by the local athletics club and held on Loughborough University’s fantastic facilities.

The problem was, my husband and daughter were away camping that weekend (my son was supposed to go too). Which meant I had to drive there. I am a nervous driver and get stressed about driving three miles to the next village for ballet. I drove to the outskirts of London for my hen do 20 years ago, but apart from that, the furthest I’ve driven is Bristol. But I had to drive to Loughborough, which was about 90 miles away – only slightly less than London. I’m pleased to say it went better than expected and I wasn’t nervous or stressed once I was driving. My son also makes a very good co-pilot.

The Covid-19 guidelines for the competition were pretty strict. Each under 18 athlete could only take one guest – and the guest had to register in advance. You had to arrive no more than an hour early and register on a hockey pitch a five minute walk from the stadium. You could then warm up on the hockey pitch. There was only one in one out for the toilets, which isn’t ideal after a long drive. Especially if queuing for the toilet is eating into your warm up time.

But the worst thing for me is that I couldn’t get anywhere near my son.

The club had allocated a fairly large grass bank for spectators. They could clearly see the finish line of all the races and had a reasonable view of the high jump. It was miles away from the javelin and a long way from the long jump. I could face my son directly, but the best view for long jump is a side view. Normally we would be able to stand just across the barriers from him. He is usually able to walk over and talk to us after every jump.

Once he’d gone to the pit to register and mark out his run, I had no idea how he was doing.

Since lockdown started, the only time my son has jumped in a pit was a week before the competition. He had no coach, he just did it all himself. We had to pick litter out of the pit before he could start. He had to take his own spade, rake and shovel with him and even his own antibacterial spray for the sand (yes, that really is a requirement of the guidelines).

But my son has been sprinting throughout lockdown. He was training on a quiet, straight road near home about three times a week. Since June, their sprints coach has been holding once weekly sessions in the park for a small group of athletes. My son knew he had got faster. So he thought he could do a longer run-up for his long jump. But of course he hadn’t had time to put that into practise.

The key with the run-up is to hit maximum speed as you hit the board. You don’t want to start to tire and lose pace on your run-up. You don’t want the speed and distance of your first and second run-up to tire you out for your final jumps either. To go into a competition without practising the run-up is far from ideal.

My son’s PB is 6.51, but that always had a bit of a question mark over it. He achieved that with a wind that was slightly too strong, so it is down on his record with a ‘w’ next to it and he also has an ‘official’ PB of 6.36. I hated the uncertainty of that w.

His aim for this competition was a new PB and a club record. The under 17 men’s club record stood at 6.65. If he’d been able to compete all summer, we have no doubt that he would have smashed that record. Having jumped 6.29 at his most recent indoor competition and having had no jumps training since March, I felt the best that he could hope for was to get around his PB.

I felt very emotional watching him from that distance.

He certainly looked quick and the jumps looked good. But were they long? Was he getting over 6 metres? Was he hitting the board right?

From where I was stood, I couldn’t read him or the jumps at all. There was no obvious signs of triumph or disappointment. Although my son does try to keep his emotions in check so he can stay completely focused.

I didn’t see any flags, so I assumed the jumps were all legal (ie not over the board), but maybe they just weren’t using flags?

The athletes all had six jumps each, which I was really pleased about. As they were in different age categories, they were competing against themselves rather than each other. In an age category competition, athletes usually have three jumps, then the top few have an extra three jumps.

My son needed six jumps to put everything to the test and hopefully achieve his aim.

When he walked over at the end, he still didn’t get anything away.

There wasn’t even any triumph in his voice over the PB. But what a fantastic achievement!

He actually broke his PB several times and now has a new PB of 6.63. The question mark of that ‘w’ is long gone and he is now very high on the national and regional rankings. It’s a shame about the club record, but it was always going to be a challenge with no competitions all summer.

I couldn’t be happier about my son’s return to long jump. 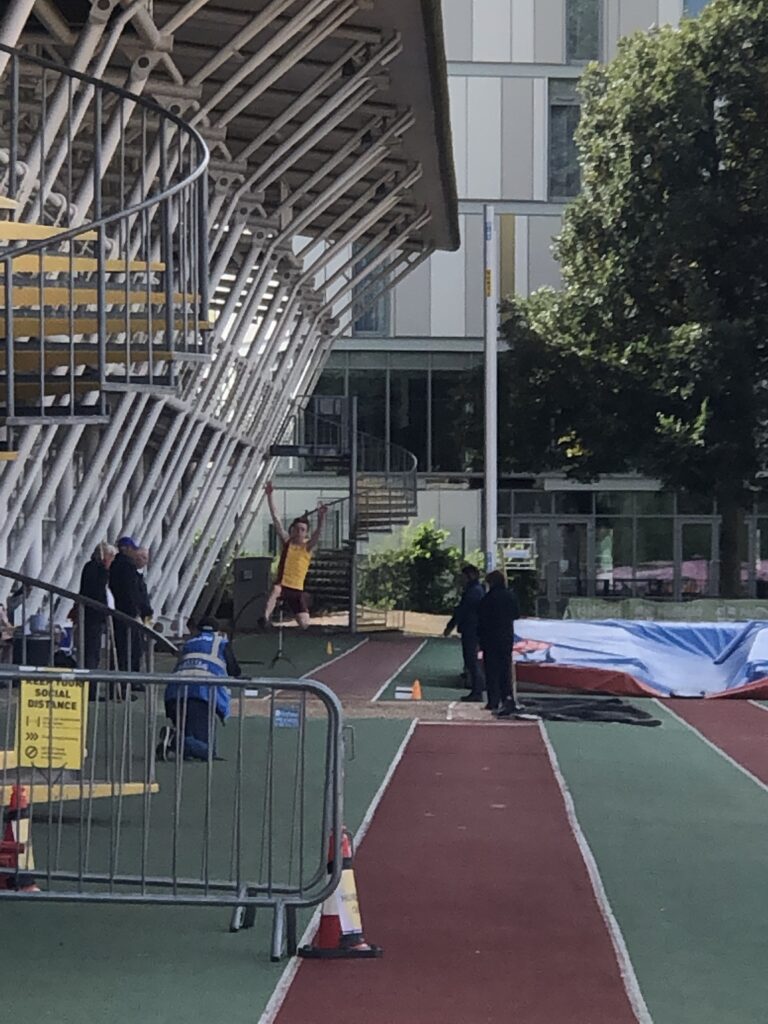