Return to marathon training: Weeks 5 to 8

I am currently training for Brighton marathon in April – my second marathon following Newport last year. It will also be my husband’s first marathon. He is more or less following the same plan as me, but we only run together on Sundays. He does his body conditioning in the gym, whereas I do it at home. He also has to be careful not to run too much as he plays football twice a week.

We are now over halfway through our training. You can also read about the first few weeks of training.

The week started with what is described on my plan as a ’30 minute intense run’. I call that interval training and my son calls it fartlek training, but either way I did just over three miles with some sprints mixed in with slower running. Body conditioning was an hour again and I wasn’t aching afterwards, so that was real progress. My Thursday run was supposed to be 40 minutes (which I call four miles), but as I knew I couldn’t manage a longer run on Saturday, I did six miles on Thursday. I had 12k on the plan for Friday. As I only work in miles, I converted that to seven miles.

Saturday should have been a ’60 minute light run’, but as we weren’t at our home parkrun because we were travelling to an athletics competition for my son, I just did a 30 minute (well, 27 minute) parkrun. Sunday’s 13 mile long run was horrendous – combining Storm Ciara, my IBS and problems with my technology (both my watch and my music), but I survived it.

The week started with a ’50 minute steady run’, which I interpreted as a five mile run. Body conditioning was as boring as ever, but I wasn’t aching afterwards. Thursday’s run was six miles. Friday’s was described as a ’30 minute effort run’. I have no idea what an ‘effort run’ is, and as they don’t appear anywhere else on the plan, I decided to just do a three mile tempo run. Saturday’s run was a steady six mile ‘parkrun sandwich’, followed by a 14 mile long run on Sunday, which despite Storm Dennis, was about 100 times better than last Sunday’s run.

I don’t usually mention it, but every week starts with a rest on Monday. On Tuesday I had a ’45 minute intense run’, which translated as five miles of sprinting combined with slower running. Body conditioning on Wednesday was as boring as ever. The temptation not to do it is almost overwhelming, but I would never forgive myself if I got injured because I hadn’t trained properly. I ran six miles on Thursday and eight miles on Friday – my longest midweek run to date. I didn’t have time to run on Sunday, as my son had an indoor athletics competition, so I did a 15 mile run (including parkrun of course) on Saturday.

This week felt like an easier one. I started with a six mile run on Tuesday, followed by the dreaded body conditioning on Wednesday. Thursday’s run was five miles and Friday’s was a four mile ‘intense run’, or interval training, in the pouring rain. Saturday was a ’30 minute light run’, which is perfect for parkrun. On Sunday, we ran 16 miles. Every long run feels quite hard, but not too hard. I know I could have done at least another three or four miles, but not another 10 just yet.

My husband thought it could be all over in week 8. He had to stop his six mile run after a couple of miles because he hurt his ankle, and thought he would need to take at least a week off, but he actually only took one more run off and was back for parkrun and the 16 mile run. 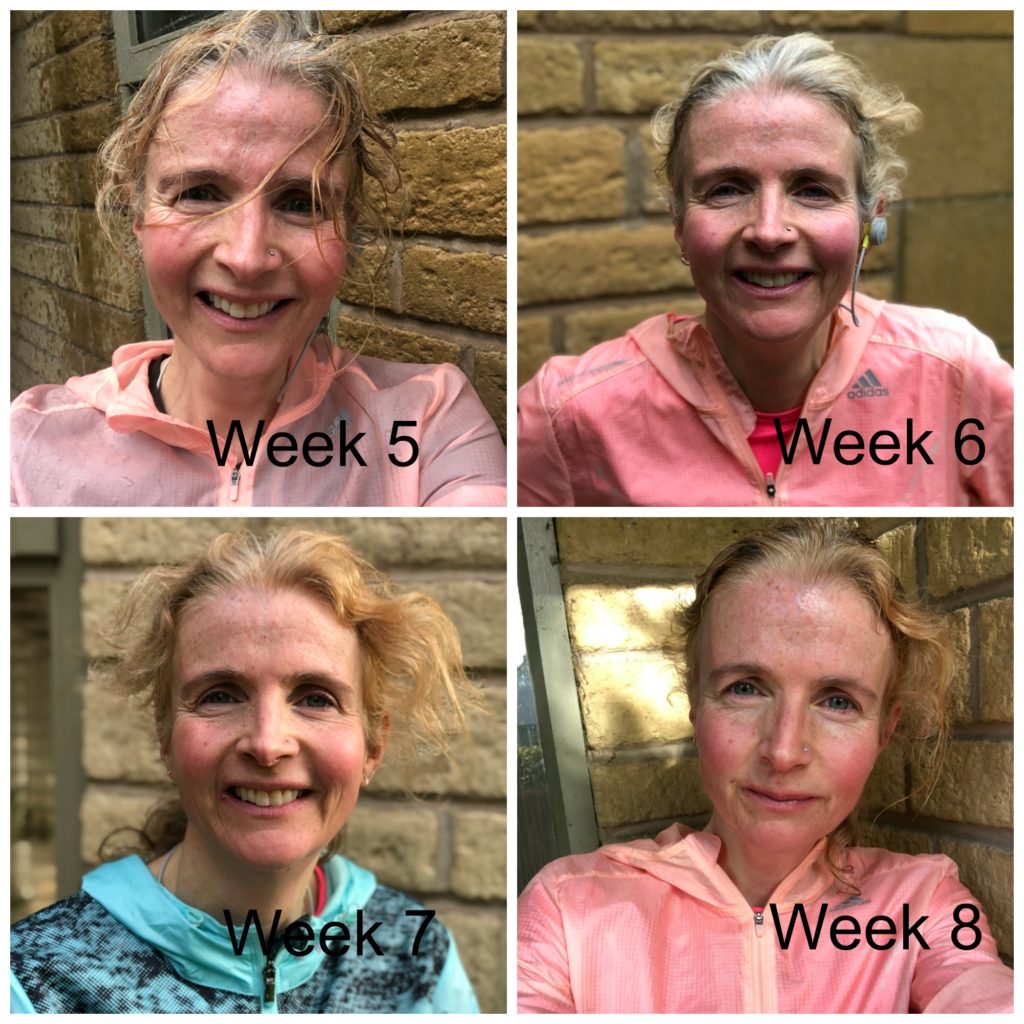