Following Newport marathon last year, this year I have signed up for Brighton marathon. And my husband will be joining me – for his first ever marathon! Last year I followed the marathon training plan from the Newport marathon website, which worked well for me. So I have decided to follow the same plan again. My husband will keep the same plan as a guide, but is unlikely to manage running five times a week. He also plays football during the week, so will need to factor that into his training, to make sure he doesn’t overdo it.

But the first few weeks of marathon training hardly felt like training at all.

The plan for week one included only three runs, with the longest run being a ’60 minute light run’. As I always run four times a week, with a long run of eight miles and total mileage of 19 miles, I stuck with my usual running pattern. The only changes I made were adding in 30 minutes of body conditioning and slowing the pace down on the long run.

I had forgotten how hard I find the body conditioning! This year I was conscious of not doing extra reps on things like longest and squats, because they feel easy at the time, then they kill for three days afterwards. But I have no core strength at all, so my stomach ached for three days instead.

We struggled a bit with adjusting the pace for the long run. This year’s aim is to run the marathon at 9:30 mins/ mile. I did it at 10 minute miles last year, which I found pretty easy, so I think knocking 30 seconds off should be OK – and should get me across the line 13 minutes faster. As we usually run at around 8:45/ mile on a long run, it took us a couple of miles to settle into the pace, but we eventually got the hang of it.

The plan for week 2 included four runs, which is what I normally do, with the longest run being 10k. I again more or less stuck with my normal pattern of running, as I am still running further than the plan. I did a four mile run at my usual pace on Tuesday, followed by body conditioning on Wednesday. I don’t think body conditioning has got easier yet, but it didn’t hurt afterwards this week.

My Thursday run was four miles again, but I did a tempo run, which should be running at about 30 seconds per mile below 5k (parkrun) pace. To be honest, it was mainly closer to parkrun pace and I really enjoyed it. Saturday should have been a 20 minute ‘light run’, but as I’m not currently pushing myself, I stuck with parkrun at parkrun pace – and was actually first lady across the line!

As next week’s plan calls for a nine mile long run and the following week’s calls for an 11, we decided to do nine miles this week, then will do 10 miles next and then stick with the plan for week 4. An extra mile was very easy to do and we managed to settle into marathon pace much more easily than in week 1.

In week 3, the plan finally asked me to run more than I usually do! Now I feel like it’s all getting a bit more real – and I’m enjoying it. I started the week with a ’45 minute steady run’ on Tuesday. I interpreted that as a five mile run at my usual pace, so that came in at just under 45 minutes. Body conditioning was up to 45 minutes this week and I could feel my stomach muscles again. Thursday’s run was six miles and Saturday’s run was the fastest parkrun I’ve done since 2018! I finished the week with a 10 mile long run (although the plan said to do nine miles).

Week 4 was the one I was looking forward to – when I finally get up to five runs a week! That’s when I feel like I’m really marathon training. The week started with a 45 minute tempo run, which was five miles for me. I enjoy the fast running. Body conditioning is up to an hour now, which sadly means I have to sacrifice a morning walk on Wednesdays. I can’t really justify any more than an hour’s exercise before work. The extra 15 minutes are mainly leg exercises and I really felt them the next day.

Luckily Thursday’s run was a 45 minute ‘light run’, so I did five miles at my marathon pace of 9:30 minutes per mile. Friday’s run on the plan was just described as a 10k long run, with no indication of pace, so I just attempted to run six miles at my normal pace. It was actually slightly slower as I was still struggling with my legs from the body conditioning. Sadly once I get up to five runs a week and with the Sunday runs getting so much longer, I have to sacrifice my pace at parkrun. Saturday’s run was described as a ’30 minute light run’. Thirty minutes is perfect for a slow parkrun (3 miles/ 5k). We ended the week with an 11 mile run at marathon pace, which was very comfortable. 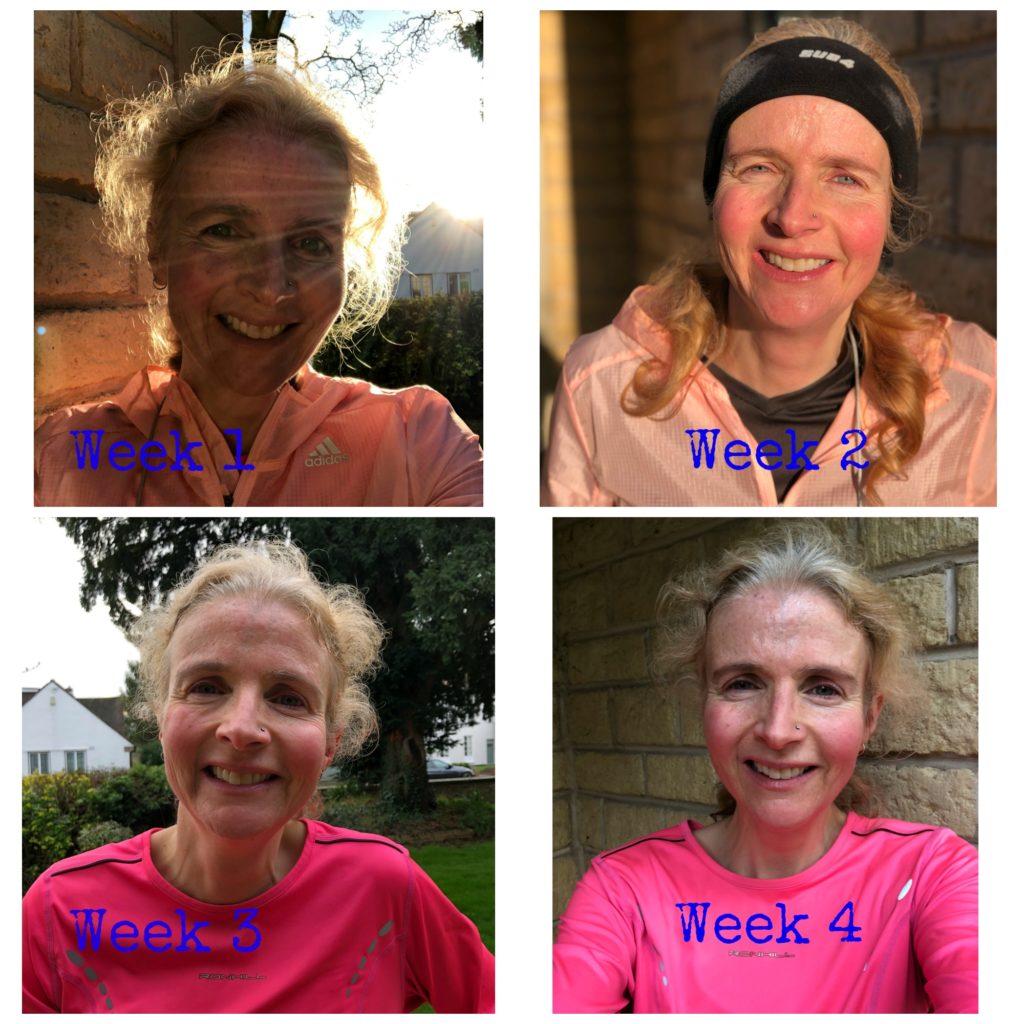