The athlete and a return to form

Home » Family » The athlete and a return to form

The road to recovery for my son since he broke his pelvis last summer has been a slow one. Since recovering from the fracture, he has been plagued by shin splints. This has left him unable to train and unable to compete a lot of the time. But he was still determined to take part in the England Athletics Indoor Championships for his age group in Sheffield. His PB of 6.51 put him well over the qualification standard for this national competition.

His first two indoor competitions, in Birmingham, were a bit of a shaky start to the season for him. He failed to reach the magic 6 metres at both of them, but there was also positives to take away. The first positive was of course that he managed to jump without injuring himself. The second positive was that he got a triple jump PB and a silver medal. The downside of the triple jump PB was that tiredness meant his long jump performance was worse rather than better on the second competition.

Since then, he’d had his confidence boosted by a solo training session he’d done, as well as a session with his coach. Although jumps aren’t measured in training, he was confident he’d jumped over six metres and was in a positive frame of mind going into the competition.

So he went to Sheffield with the aim of improving on this season’s performance. He also had a personal aim to beat the two boys who had beaten him at Birmingham. He knew he had it in him to do considerably better than them – and they would have had no idea!

There were 21 boys in his age category – eight of whom would get three extra jumps. (Everyone has three jumps, then the top eight get another three.) He didn’t expect to get the extra jumps.

The competition was the biggest one he’d been to. The EIS in Sheffield is a fantastic indoor facility, with 200 metre and 60 metre tracks, plus space for long jump, triple jump, high jump, pole vault and shot put. (You really can’t do discus and javelin indoors!) There is also lots of audience seating.

The rules were strict – athletes had to arrive 90 minutes before they were due to compete or they couldn’t take part. They had to go in a separate entrance to their families and they weren’t allowed their phones. Sheffield is a long way from us. Worry about how long it would take to get there and the possibility of disqualification for arriving late meant that we arrived an hour early. That seemed a long time for my son to be on his own – especially without his phone. But he went off happily.

A bit later, we found him. Athletes were coming and going as they pleased – and they were allowed their phones. He went back to the holding room 90 minutes before the event and we watched everything else. Watching athletics is non-stop as there are usually three field events and one track event going on at all times, so there is a lot to see and no chance of getting bored.

Then a big line of boys walked out and over to the benches by the long jump pit. There were so many of them, there wasn’t even room for them all to sit down. Two of the boys hadn’t turned up for whatever reason, so there were 19 of them. They all measured their runs and marked them (nothing is left to chance in long jump) and had two or three practise runs and jumps each before the competition started.

The first two boys jumped something beginning with five metres – low five metres at that. This was a reminder to me (and hopefully my son too) that he hadn’t done ‘badly’ the other week when he’d failed to reach six metres. He’d done very well by most people’s standards, just not well for him. Those boys jumping over five metres would have won school, club and district competitions easily.

Then the boys started jumping over six metres. There were even a couple of jumps over seven metres. One of the boys had previously jumped about 70cm further than anyone else, so it was no surprise when he jumped way over seven metres.

My son’s first jump was 5.92 and I sensed his disappointment.

From where we were sitting, it was hard to make out how far anyone had jumped. Was his second jump as good? No. It was better.

He’d jumped 6.29. He’d finally broken the six metres and he’d done it in style. That’s actually his third best jump of all time.

Would he beat it on his third jump? 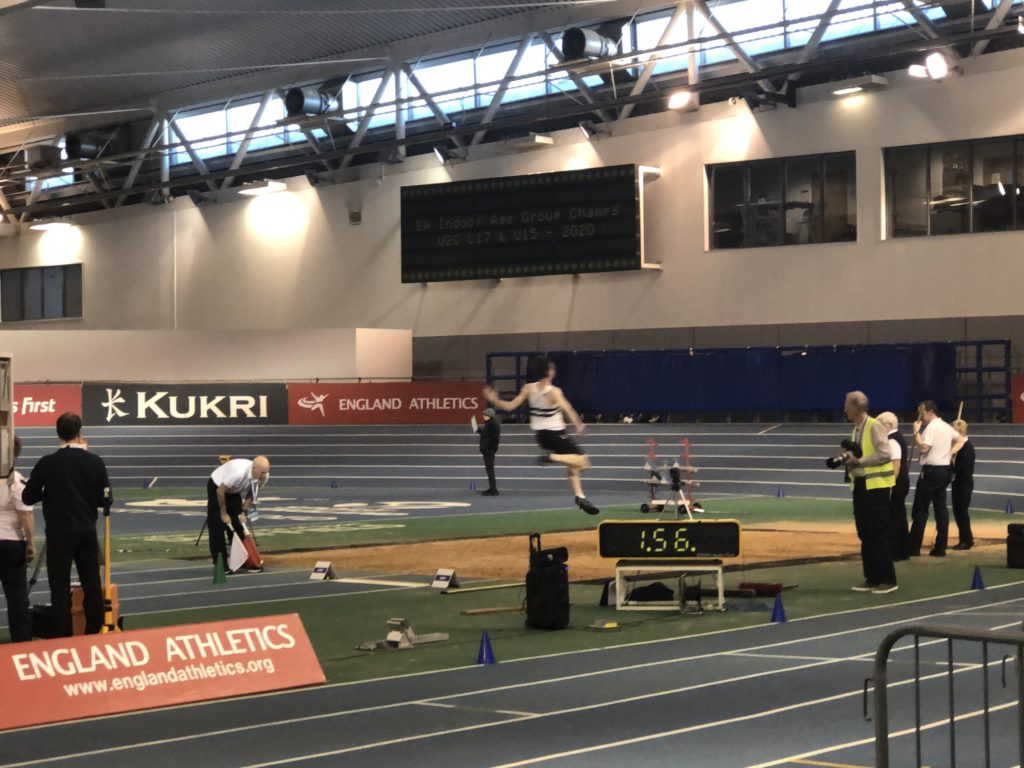 No. His third jump was dead on six metres. But this bodes very well for the future. Last season, once he’d jumped six metres, he didn’t go back. So it feels like this will be the way forward for him from now own.

Then there was the tense wait to see if he would get the all-important extra jumps. A lot of the boys had jumped something in the 6 metres 20s.

He missed out by just 3cm! I could see his face fall. Of course he was disappointed, but he should also be very proud of himself for coming so far. His distance was equal with another boy, but he came behind him in the rankings as the other boy’s second placed jump was further than his. (Luckily this boy didn’t get the extra jumps either.)

But to finish in the middle of a national competition after breaking your pelvis is pretty good going.

All being well, he now has one more indoor competition before the outdoor season. And he’s ready to get a new PB and to compete at the highest level.

(Oh and he beat the one boy from Birmingham by a considerable distance and the other boy was the one he drew with. They would have been very surprised at that.)