The athlete and the triple jump PB

Home » Family » The athlete and the triple jump PB

Last season, he only competed in triple jump a handful of times – generally coming third. His triple jump was good enough for him to represent the district in the county championships. Unfortunately, his long jump competition at the county championships lasted so long at that he almost completely missed the chance to do triple jump. Generally, in athletics competitions, everyone gets three jumps and then the top six competitors get another three jumps. Because his long jump had over-run, my son ended up doing just two triple jumps after everyone else had finished. Had he had the time, he would have qualified for the three extra jumps and potentially jumped far enough to go on to represent the county at the regional competition.

My son also took part in triple jump in the one competition he completed for his club in the summer 2019 season. He was supposed to do triple jump again at his next club competition, but as he sadly fractured his pelvis on his first long jump, that didn’t happen.

In short, my son didn’t get to do as many triple jumps in 2019 as he would have liked. He achieved a PB of 11.80 and felt sure he could have managed 12 metres if he’d had more chances. For 2020, one of his big aims is to achieve more in triple jump – and to represent the county at the regional competition.

When the indoor season came around, my son decided to sign up for triple jump as well as long jump at the indoor regional championships. This time round, the triple jump came before the long jump in the day, meaning he would definitely get the chance to compete and he wouldn’t already be tired from competing in long jump. 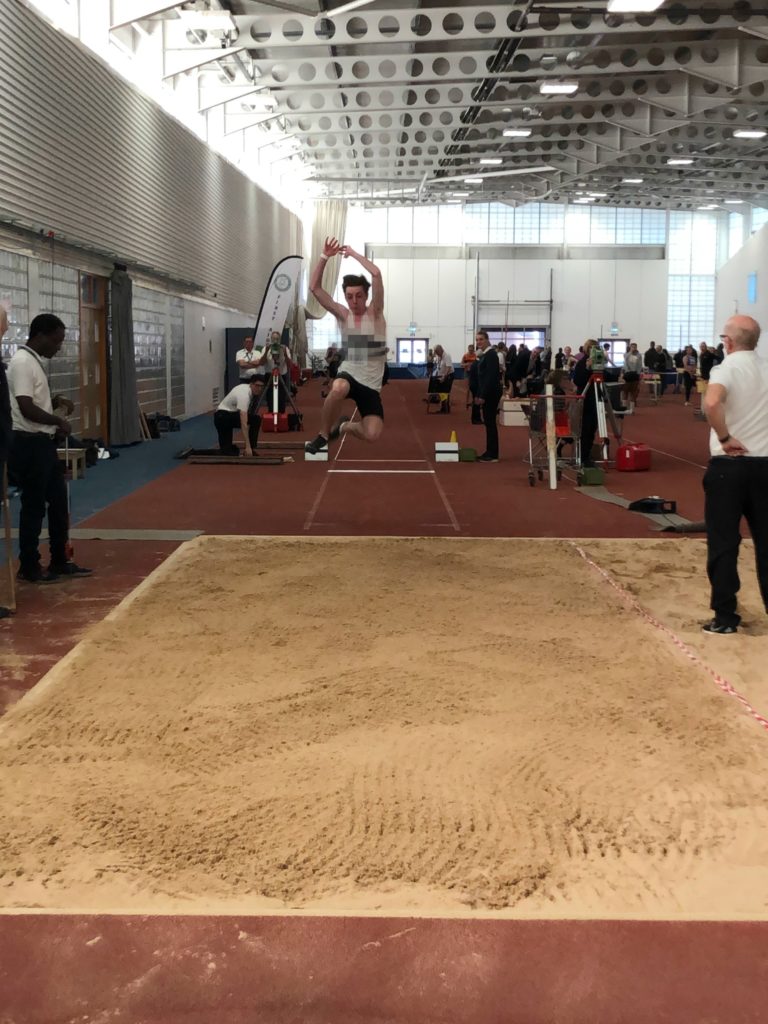 It would have been easy to try to push for the victory, but that could have meant overdoing it. In jumps competitions, athletes always have the option to skip a jump or two to save their legs. (Everyone jumps for the first round, then they all jump again in turn for the second round and so on. If they choose to skip a jump, they obviously cut down their chances for a PB or a win, but they also cut down their chances of injury and exhaustion.)

So my son got a PB, a silver medal and the opportunity to stand on a podium for triple jump at the regional indoor athletics championships. It was a very proud moment for us all and bodes well for the summer season ahead.

Sadly, as he was only partly recovered from injury and not at full fitness, the exertion involved in the triple jump meant he was too tired for the long jump and ended up finishing in fourth. But there is plenty of time to build on that and get back to his best.

Update June 2020: We are now in the depths of lockdown and there has been no athletics training since March. We don’t know when or if competitions will be back this season. My son feels he has been robbed of his under 17 season – after the first year was plagued by injury, the second year has been pretty much cancelled by coronavirus. He wants to break long jump under 17 club records before he moves into the under 20 age group in the autumn. He knows he can do it, if he just gets the chance to compete.

He has all the long jump club records in his head – indoor and outdoor, under 17, under 20 and senior. But the records he didn’t have in his head were the triple jump records. Today, in June, we looked at the club indoor records for under 17s and we realised that, not only did he get a PB at this competition, but he actually smashed his club’s under 17s indoor triple jump record!