Around the end of last summer, I became aware of a shortage of HRT in some parts of the country. I was lucky, I could still get mine.

I went on HRT early last year, after months of horrendous night sweats. I would wake up most nights literally drenched in sweat and would end up sleeping on a towel. Needless to say, it was making my already troubled sleep even worse.

Initially, I started on HRT tablets, but after a few months my GP was keen to switch me to either a patch or gel. With the pills there is a slightly higher risk of blood clot than with patches or gels. The GP described the patches and gels to me and they seemed much of a muchness, but I decided to go with the patches.

I got on well with the patches for several months. They weren’t perfect – sometimes I got sore spots on my skin when I removed them and the sticky mess they left behind was very hard to wash off. I usually had the evidence of the last three or four patches on my thighs. But nobody could see that and it really wasn’t a problem to me.

Then in November I went to collect my prescription. And the pharmacy had run out! They wouldn’t have any more until January and it would be the same situation everywhere. But they suggested I try another pharmacy, just in case they had any left.

I got lucky with the second pharmacy I tried – they had just two boxes left. My prescription was for three boxes, but I gratefully took the last two boxes and the pharmacy IOU.

I didn’t give the HRT shortages much thought after that. But it’s amazing how quickly two months and two boxes of HRT patches disappears. Suddenly I was on my last patch and I hadn’t heard anything from the pharmacy about the final box. So, as it was now January, I took my IOU in.

My HRT would be out of stock until the end of February.

THE END OF FEBRUARY?!

That was nearly two months away.

There are a huge number of symptoms of menopause. I only had the night sweats and my sleep trouble and possibly a bit of anxiety. I often feel stressed, anxious and overwhelmed in the mornings. I’d always thought it was just life that made me feel like that, but having read about menopause, I think it could well be the cause. I’ve struggled with sleep since the end of 2013, which fits in well with the perimenopause lasting up to 10 years. Even though HRT didn’t help me sleep normally, it did improve it a bit.

The thought of the night sweats coming back and my sleep getting worse was not a good one.

Two phone calls to the doctor and a 10 day wait and I had been prescribed an alternative – a gel. By the time I got it, the night sweats had already kicked back in.

The gel has to be used every day, at the same time of day. You need to apply it to the ‘mid inner thigh’. After you’ve applied it, nobody else can come into contact with it for an hour, so it’s not ideal to put it on just before bed. You also have to keep your clothes off the area for five minutes afterwards.

The gel is wet, cold and sticky. And it doesn’t just cover the ‘mid inner thigh’, it covers the whole of the inner thigh, and most of the front of the thigh too. It feels pretty horrible, to be honest. As I’m putting it on very early in the morning, I just wander round without my trousers on for five minutes, because I won’t offend anyone in my pants. The gel does at least dry quickly.

For some reason, the doctor only prescribed me one month’s worth of gel, so I ended up having to chase up another month’s worth to get me through to the end of February. The gel has been OK, but on balance I do prefer the patches and will be glad to have them back.

It’s not clear why there has been an HRT shortage for so long other than ‘manufacturing and supplier issues’, which all sounds very vague. Apparently it isn’t due to Brexit, but I’m a little sceptical about that.

Either way, it’s pretty crap. I’m lucky that I have relatively few symptoms compared to some people. For people with a lot of symptoms it would be impossible to maintain a normal quality of life without HRT – which would also impact on their families and those around them. There will be many women out there who are desperate to get their HRT back as soon as possible.

Have you been affected by the HRT shortage? How have you coped? 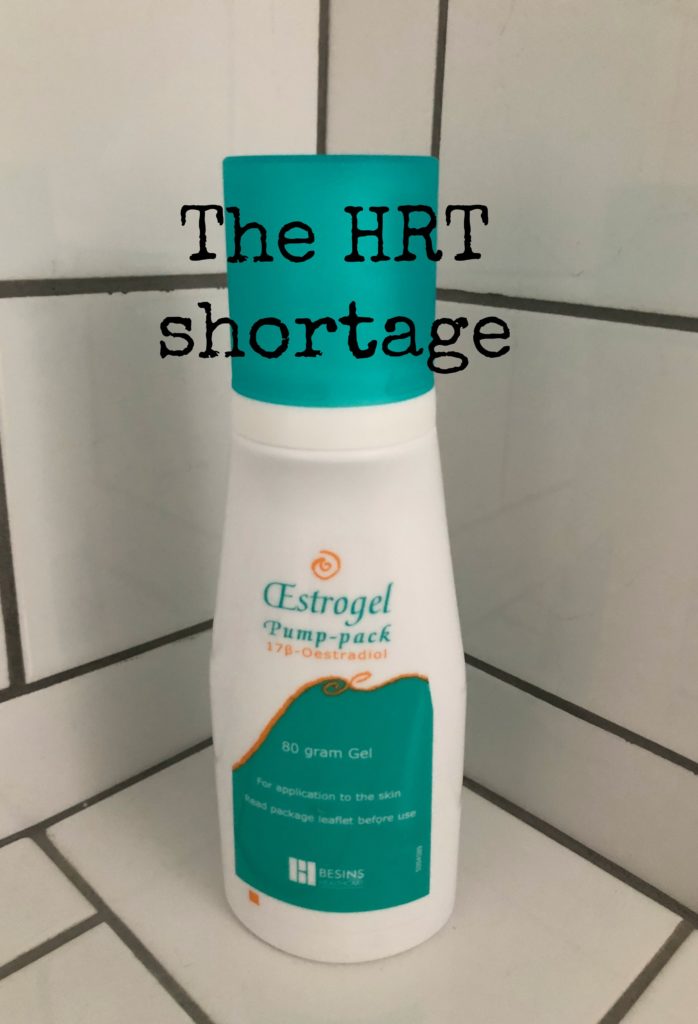