I started the year excited that my eldest was going to turn 18. Raising a child all the way to adulthood is a pretty big achievement. I wanted to make his 18th birthday really special for him and for him to know that I’d put the effort in.

To be honest, I wanted to make it special for myself too. I wanted to look back and know that I’d done more for his 18th than I usually do for birthdays. I’d planned to start preparing right at the start of the year. As a summer ‘baby’, some of his friends had already turned 18, so I may have got some inspiration from their parents’ Facebook and Instagram.

Needless to say, I didn’t actually start preparing until the start of June, and his birthday was at the end of June.

We wanted to get him a big present that would last and that would be memorable. The budget for his 18th birthday was going to be a lot higher than the usual birthday. It took a while to agree on what the present would actually be (he doesn’t like surprises). He wanted a financial contribution towards something he plans to buy later in the year, but we wanted to buy him a present that he could keep. In the end, we opted for a Brompton commuter bike. He plans to cycle to work every day when he starts his apprenticeship. My husband and I already have Bromptons and he borrows them quite often, but liked the idea of having his own.

For me, the photos were key to a lot of things. I wanted a selection from his life – from newborn to the present day – that I could use to decorate the room. I would also use them for his birthday cards and for social media – the obligatory Instagram and Facebook posts. Unlike most people, I actually print my photos off (although I am about a year behind). I have about 150 photo albums covering his life.

My daughter and I spent a couple of hours going through the albums and finding suitable pictures. There are a few classics of him and his brother that we always use, and lots of others that we would have forgotten. I’ll be honest, we missed a chunk of his life between about 6 and 11. But we had baby and toddler photos, a few from when he was 12 and a few from his teenage years. We printed each one off on A4 sheets and used them to decorate the room. Thank goodness we started to stick them up early, because it took a long time! 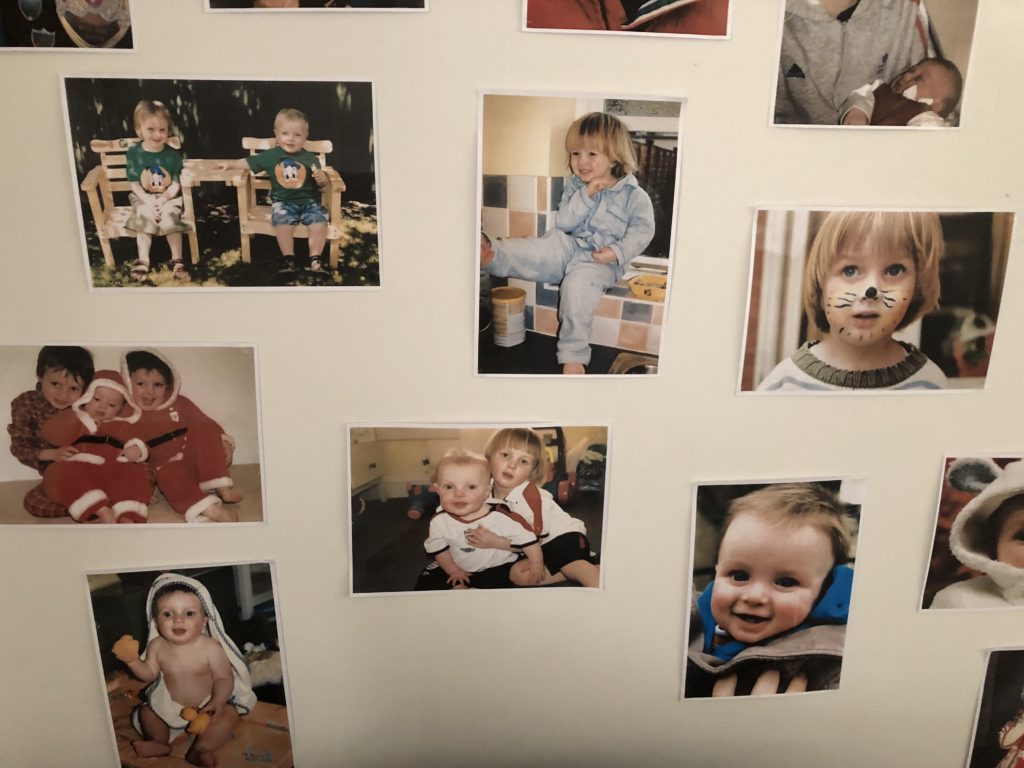 I love nothing more than a personalised photo birthday card from Funky Pigeon (this is not an ad!). I do them for pretty much every occasion. So I was going to go big for his 18th birthday. From his brother, I did one with all photos of the two of them together as toddlers. There aren’t so many photos of him with his sister, so I just did a round-up of photos of him from babyhood to the present day. From us, I did a bigger card with more photos, including ones of him with us and one of him with his girlfriend.

I haven’t succumbed to the giant foil number balloons for every birthday like everyone else seems to have done  on Instagram. I wanted them for something special – specifically my son’s 18th birthday. I also wanted letter balloons to spell out his name. My local party shop was VERY expensive (£9.99 per letter and per number), so  a friend recommended I tried eBay for the letters. I got them for 99p each. You blow them up yourself with a straw (I got paper ones of course) and then string them together. One of them deflated and looked a bit rubbish, but I guess you get what you pay for and on the whole I was very pleased with them.

My friend recommended Card Factory for the big balloon numbers and I was really pleased with those – especially as I could park really close by and didn’t have to drive into town! I bought them about a week before his birthday, then realised it was too early to inflate them. But you just need to hold onto your receipt and take them back to be filled with helium when you’re ready. Result! They cost £6.99 each, plus 99p for each weight. They are huge and I think they look really good. 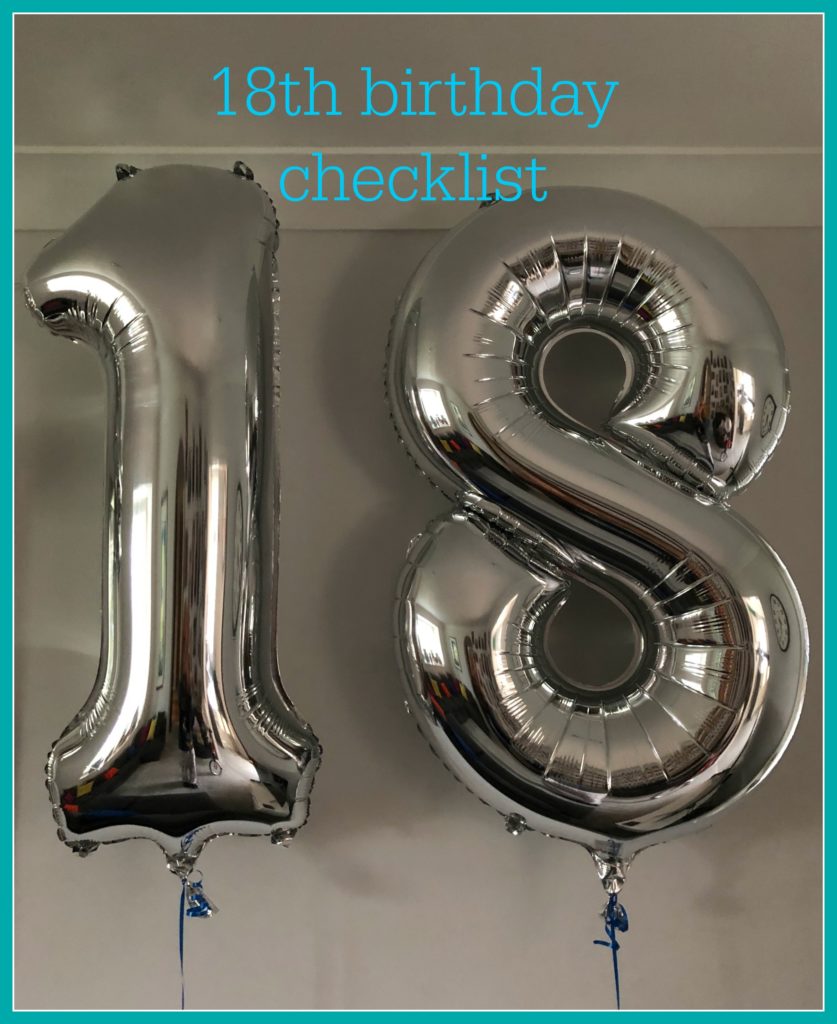 I don’t make cakes. For every birthday, I choose something from a supermarket. My son has always liked a Colin the Caterpillar from M&S. When I started looking into personalised cakes – from M&S, supermarkets and local companies they were a) very expensive and b) there was far more female options.

One thing I just couldn’t ignore though was the giant Colin the Caterpillar from M&S. It’s £40, serves 40 and is MASSIVE. It comes with a leaf with a personalised message on it. After a couple of days of pondering, I realised I wasn’t going to find anything more appropriate. My son was very pleased with his Colin – and so was everyone else.

I don’t suppose many 18th birthdays pass by without some sort of celebration requiring food and drink – whether it’s a teenage house party or a family party at the village hall. My son decided he didn’t want a house party this year, which I was pleased about after last year’s. It helped that his birthday was on the same day as prom. But we invited my family round for a celebration a couple of days later. As the weather was very warm and sunny, we had a barbecue. My family aren’t big drinkers, so we just needed a few beers and a few lemonades (we’re not big fizzy drink drinkers either!).

I wanted 18th birthday napkins and disposable tablecloth for the family party. I could only find one 18 tablecloth on eBay/ Amazon and it was horrible, so I gave up on that idea and was kinder to the environment. I got some napkins just days before his birthday, which were free postage and arrived very quickly. I also wanted some 18 wrapping paper and discovered I could get some personalised from eBay for a very similar price to standard paper, so I went for that. Again, it was free postage and very quick delivery. I got him a badge for 39p from Card Factory in case he wanted to wear it for his prom (he didn’t). I took the price off so that he wouldn’t be horrified at how tight I am!

Clearly I’m not very tight at all, having gone to all this trouble to make his birthday brilliant.

I’m pleased to say that my son was pleased with all the effort, especially the balloons and the photos on the wall. My younger son is already nervous about what photos I may unearth for his birthday!

Do you do anything extra for a milestone birthday? What else could I have done?