Before I talk in detail about weeks nine to 11 of my marathon training, I need to give huge credit to my husband for his support. I have been a runner, to a greater or lesser extent, for my entire adult life and have always run alone.

About a year ago, my husband and I started running together on a Sunday morning, because they kids are old enough to be left alone. My husband isn’t training for the marathon, yet he has carried on running with me every Sunday morning. He said he would go up to 16 miles with me. But he ended up running 18 miles. He may yet go all the way to 22 miles next week. It has been so good having him train with me every week.

Week 9 started with a 45 minute ‘steady run’, which I interpreted as five miles at 9 minute/ mile pace, followed by the dreaded body conditioning, which was as boring and painful as ever. Thursday was a five mile ‘light run’, which I ran at my marathon pace of 10 minute/ mile. I switched Friday’s and Saturday’s runs around a bit, as I was doing a bit of parkrun tourism on Saturday, so could only run three miles, rather than a longer ‘parkrun sandwich’. This left me a mile down on the week, but I don’t worry about things like that. I finished the week with my third consecutive ‘longest run ever’ – 18 miles! Up to 13 miles is now quite ridiculously easy, but I was feeling it around the 15 and 16 miles. Once I got on the ‘home straight’ at 16.5 miles, I was feeling good again.

Week 10 didn’t start off well, as my legs were still aching badly from my 18 mile run. I decided to swap my 45 minute tempo run for a three mile light run, which was absolutely the right decision. Body conditioning was just a necessary evil, then I had my longest midweek run of the whole training plan – 10 miles. That went really well, as did the 45 minute steady run aka five miles at 9 minute/ mile pace the next day. I did a ‘parkrun sandwich’ on Saturday, to make up a 60 minute light run (six miles at marathon pace).

I took a diversion from the plan on Sunday, but I didn’t realise how big a diversion until afterwards. It would explain how I ended up running 40 miles for the week. The plan recommended the Cardiff Bay Run for Sunday, as practise for race day. I didn’t want to go over to Cardiff and I’d had my ‘practise for race day’ four weeks previously, with Warwick half marathon. I’d assumed that the Cardiff Bay Run was a half marathon, but as I was keen to get more of the longer runs in, I decided to run 16 miles rather than 13 miles. It turns out that Cardiff Bay is only a 10k!

My legs felt good at the start of week 11, despite me running much further in week 10 than I was supposed to. I had to tweak the plan for week 11 a bit, as I was going out for the day on Sunday, so would have no time to run. That meant I had to do my long run on Saturday. Rather than cut out the Saturday 30 minute light run from the plan, I thought it was sensible to cut out the 50 minute steady run scheduled for Friday and do the 30 minute light run on Friday instead. The important thing is that the legs are feeling good for the long run.

I did a 40 minute (four mile) intense run in the rain on Tuesday and it took me two hours to warm up afterwards. My eight mile run on Friday was in even worse rain. There was even some sleet. It was horrendous. Thank goodness the rain had stopped by Friday. The long run on the plan was ’13-18 miles’. I’m trying to focus on the longest possible runs I can, so I opted for 18 miles, with a parkrun in the middle. My husband was away, so I did this one on my own and it went really well, with no struggle at 15-16 miles. 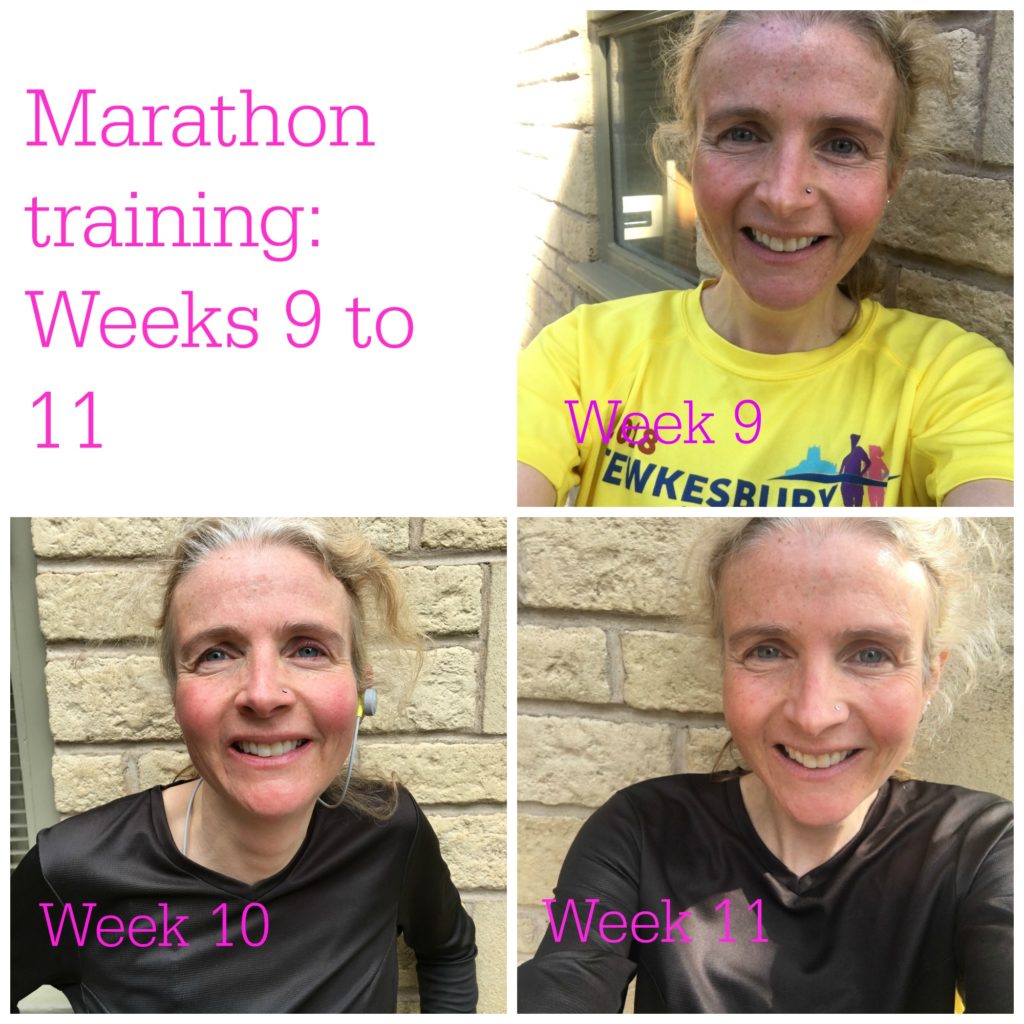 Next week, I’ve got my longest run on the training plan, then I will be onto tapering. It’s four weeks until Newport marathon!