Home » Family » No Roaccutane – YET

A few months ago, I wrote about my younger son’s skin, which was starting to go downhill. In a ‘normal’ family, it wouldn’t have been cause for concern, but in our family we have to act fast when it comes to acne. Regular readers will know just how badly my eldest and I have suffered with our skin – and how quickly it went downhill.

My son had been on antibiotics for seven or eight months when we saw the dermatologist, but I could see that his skin really wasn’t that bad. It certainly didn’t look out of place on a 14 year old boy and was only slightly worse than average.

So the dermatologist concluded that he needed to come off the antibiotics (six months should be the limit, sadly in my day there weren’t limits and I was on them for four years!) and should be given some lotion.

But the problem with lotions, is that you only put them on your face. And your face isn’t the only place where you get acne. (I realise you could put them on your back and chest, but he can’t reach his own back and wouldn’t like to ask for help, also the lotion bleaches fabrics, which is not exactly practical.)

My son’s back and chest, which had been clear, started getting very spotty and uncomfortable after a couple of months.

So Roaccutane could be on the horizon again. My son has had his blood tests in preparation and has another dermatologist’s appointment lined up. Sadly we couldn’t get our usual dermatologist, so I’m hoping this one takes note of our family history and the importance of acting fast.

In the meantime, I’m still on Roaccutane, as I have been for nearly four years, and my eldest’s skin is going downhill. We’re at the holding our nerve stage with him too. We know we will need to go back to the GP to get a referral to the dermatologist. He’s currently on no medication and his skin is about as bad as he’d be willing to accept, so it’s a case of knowing when to act.

Oh, and my daughter has got spots too… 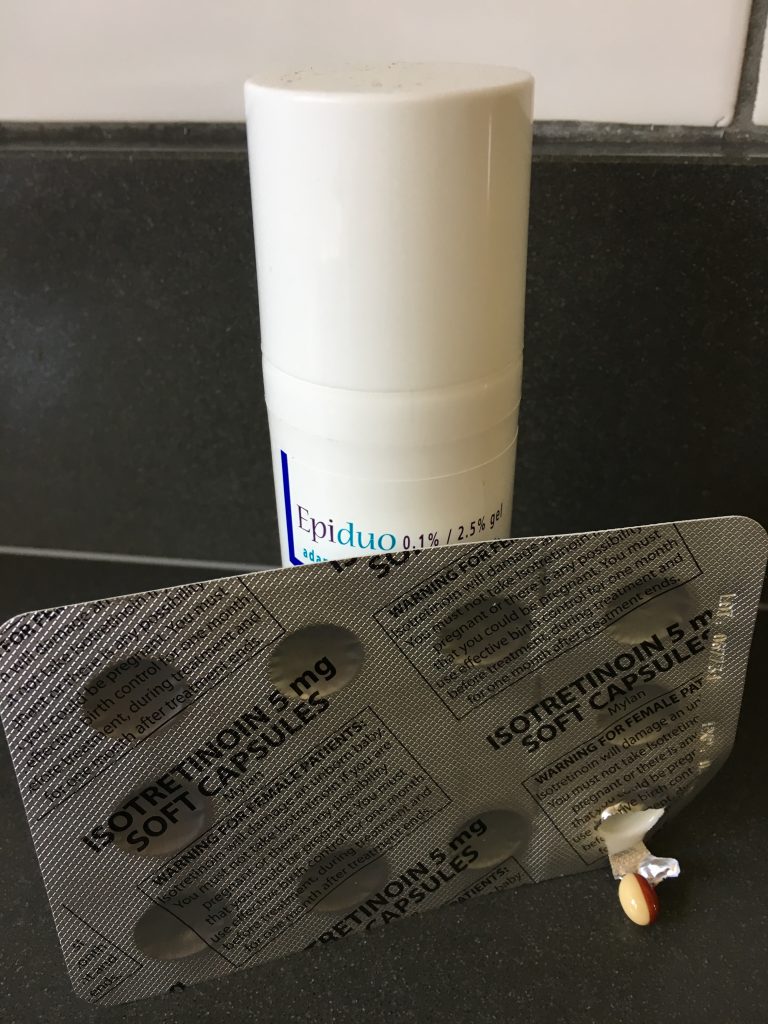