On our first morning in Copenhagen, did we rush out to do some sightseeing straight after breakfast? Or did we have a leisurely lie-in after a long day of travelling and take it easy?

We did neither of those things. We did what we always do on a Saturday morning – parkrun!

I’ve never done parkrun on holiday before (there’s only one in Cornwall and it’s a long way from Padstow). It all started when I was thinking about my younger son and parkrun. He enjoys parkrun, but for most of the year he has either rugby or football on a Saturday morning, so he’s quite restricted about when he can do it.

After the football season ended, my thought process went like this:

He can do parkrun on Saturday. Oh no he can’t, he’s got a D of E planning day.

He can do parkrun next Saturday. On no he can’t, he’s got a D of E walk.

He can do parkrun the following Saturday. Oh no he can’t, we’re in Copenhagen.

And then I thought – I wonder if there’s a parkrun in Copenhagen?

We stalked the parkrun online and discovered it was a very long-established one. In fact, Amager Faellad was the first parkrun to launch outside the UK, way back in 2009. But it only had about 80 runners a week. It looked like they had a fair few British people running it. The week before we ran, the first lady came in at 24:04, around a minute slower than I usually run. I could be first lady! That has always been a dream of mine, but I’ve never got better than third.

My husband worked out where we were going on Google Streetview. As we left the hotel, a couple in their 50s walked out behind us in running gear. They were English and heading for parkrun too.We could find the park pretty easily, the big question was, could we find the actual parkrun? We gave ourselves 45 minutes and were at the edge of the park within about 15.

The park was rather like an African plain, which you don’t expect in Denmark – lots of tall yellow grass. Visibility was nil – you couldn’t see across the park, so you just had to walk and hope for the best. We asked for directions from two people, then a runner asked us if we were going to parkrun and showed us the way. I don’t think we would have made it otherwise. There were none of the telltale signs we were used to – no big parkrun flags and no people milling around in hi-vis. There was just a very small gathering of runners, which eventually swelled to 86 people, around 10 of whom were English.

The run director came over to chat to us and had a laugh at the fact my husband and son were wearing shorts – all of the Danish men were in leggings. He also did a bit of the briefing in English, so we all knew where the course started and finished and how long it was.

My daughter had a wobble before we ran. She was worried about being on her own in a strange place, but I had first lady in my sights and my husband had a top 10 place in his. She decided she was OK to run on her own if she had my husband’s phone.

We set off and I said goodbye and good luck to my son. Two minutes later, he was alongside me and ran with me for a whole lap.

The course was lovely and peaceful. There were no marshals (we have loads at our parkrun) and no crowds (our parkrun is very crowded). It was two laps and we’re currently used to four laps at ours, but the first lap went remarkably quickly.

I was a bit worried about my daughter as the field was so thin that I feared she would be running completely alone. The course was marked out with white arrows on the ground, so at least I knew she couldn’t get lost.

After a lap, my son suddenly dropped right off. He hasn’t run parkrun since my 100th, so he hasn’t got the right sort of fitness for it at the moment. My husband was just ahead of me. I wasn’t first lady, one woman had left me for dust right at the start, but I’d overtaken another who was running incredibly fast pushing a buggy.

Towards the end, the woman with the buggy overtook me, but she shouted words of encouragement. Within a few hours of arriving in Copenhagen, we’d realised that the Danes are incredibly nice people. Everyone at our parkrun at home is friendly, but we wouldn’t ever cheer on rivals – only friends, family or people who are obviously finding it difficult.

I crossed the line in 26th place and third female in a time of 23:13, just two places behind my husband (who has beaten me at every single parkrun since I thrashed him at Cheltenham half marathon last year). My son finished in 31st place in a time of 24:22, just 44 seconds off his PB.

After I’d finished, I ran back to meet my daughter and found her running very happily. She finished in 32:50, which is the quickest she’s run for a long time. She’d thought she was second to last, but actually there were a fair few people behind her.

My younger son and I both finished first in our age category, and my husband and daughter finished second in theirs (and no, there weren’t just two runners in their categories!).

I really enjoyed my Danish parkrun and was so proud of my family for getting up and running on their first morning in Copenhagen. 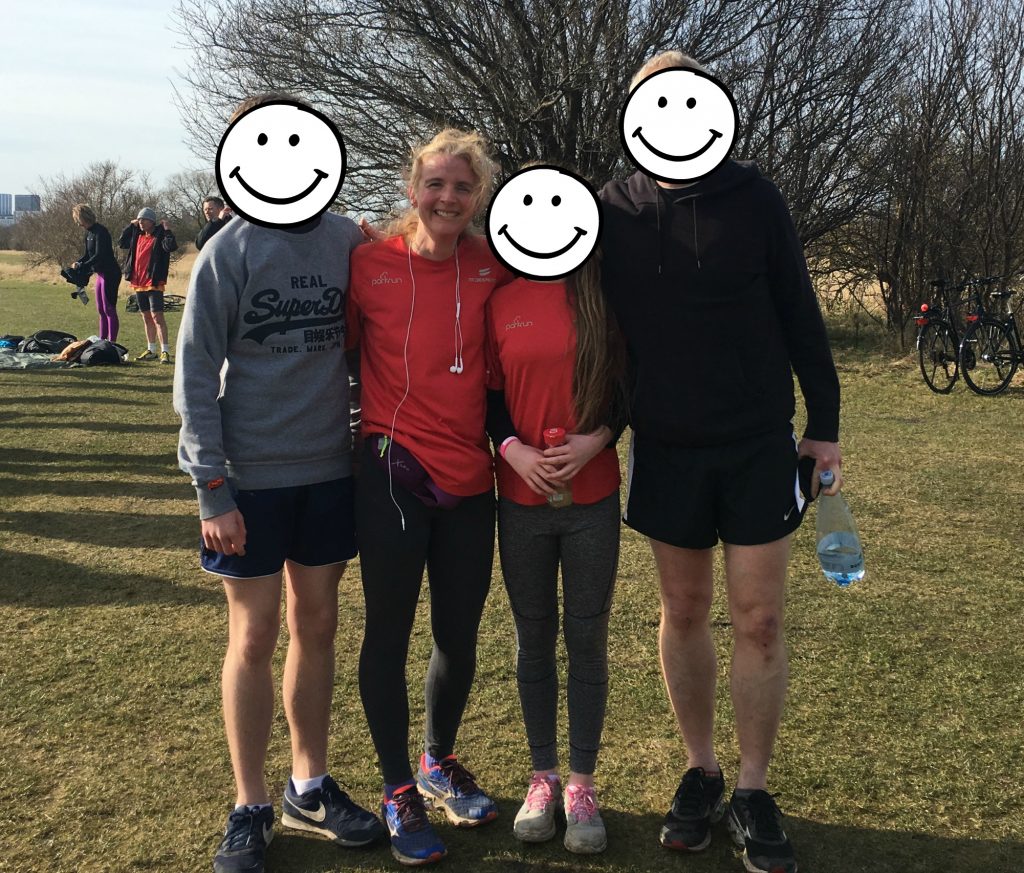