Copenhagen is a really big cycling city, second only to Amsterdam, where we cycled a few years ago. So when in Rome (Copenhagen), we did as the Romans do and did some cycling. Cycling on holiday is a positive double whammy – it’s a good way to see more than you would see on foot and it’s a fun activity of its own accord. Win-win.

Bike hire was very easy for us because we could hire them from our hotel, which is not uncommon for hotels in Copenhagen. At 150 krone (about £15) per bike for 24 hours, it was reasonably good value and took away the hassle of trying to locate a bike hire place. 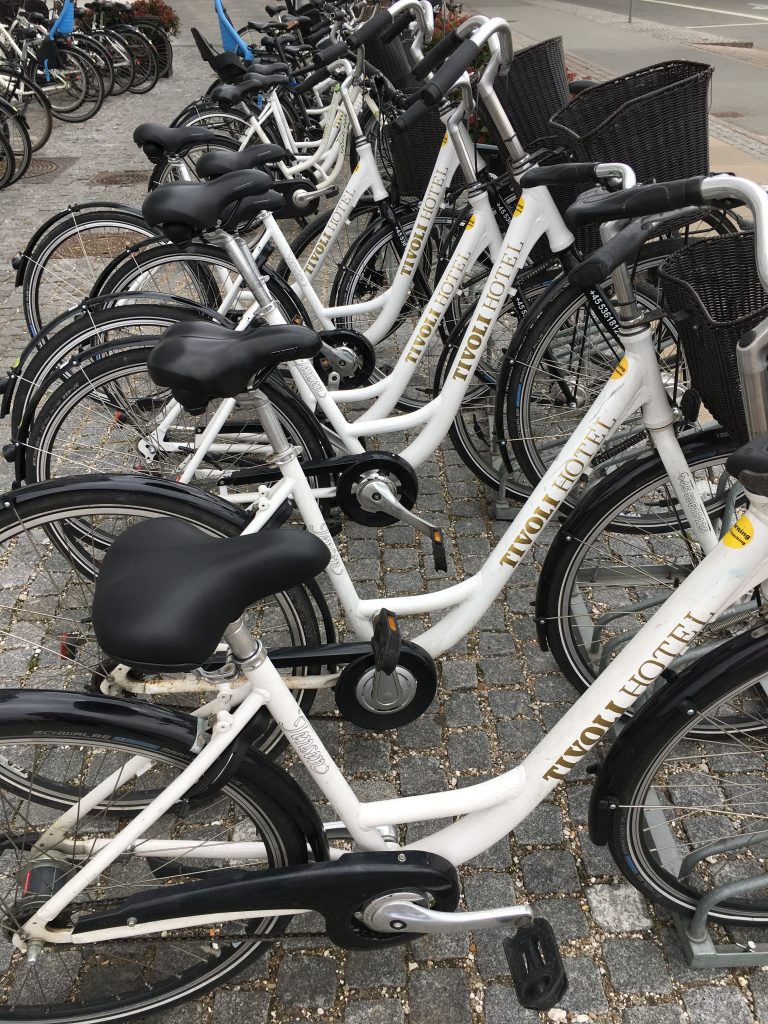 Copenhagen is very flat, which makes it the perfect place to cycle. The hire bikes give a really smooth ride (although not over the cobblestones, of which there are many). The ones we had didn’t have gears that we could control ourselves, but they changed gear automatically as we picked up speed or cycled slightly uphill. They only have one brake on the handlebars, plus a brake which is activated by pedalling backwards – so you have to be very careful not to adjust your pedal backwards when you move off. Bike theft in Copenhagen is very low, but the bikes have a built in lock which is very easy to use.

There are cycle paths alongside all the main roads in Copenhagen, so you don’t have to ride on the roads very often (but when you do, remember to cycle on the RIGHT!). The cycle paths often have kerbs, which separates them very well from the traffic. The rules of the cycle paths vary a bit, so you need to keep your wits about you (as you always do on a bike, of course). Some paths are for bikes travelling in both directions, but some are only for bikes travelling in one direction. Even on these, you need to stay aware and stay on the right hand side because Danes who ride their bikes all the time will be riding a lot faster than tourists who are unsure what they are doing. Some cycle paths even have traffic lights especially for bikes – they are smaller than regular ones and have a little bike symbol at the top as a clue. 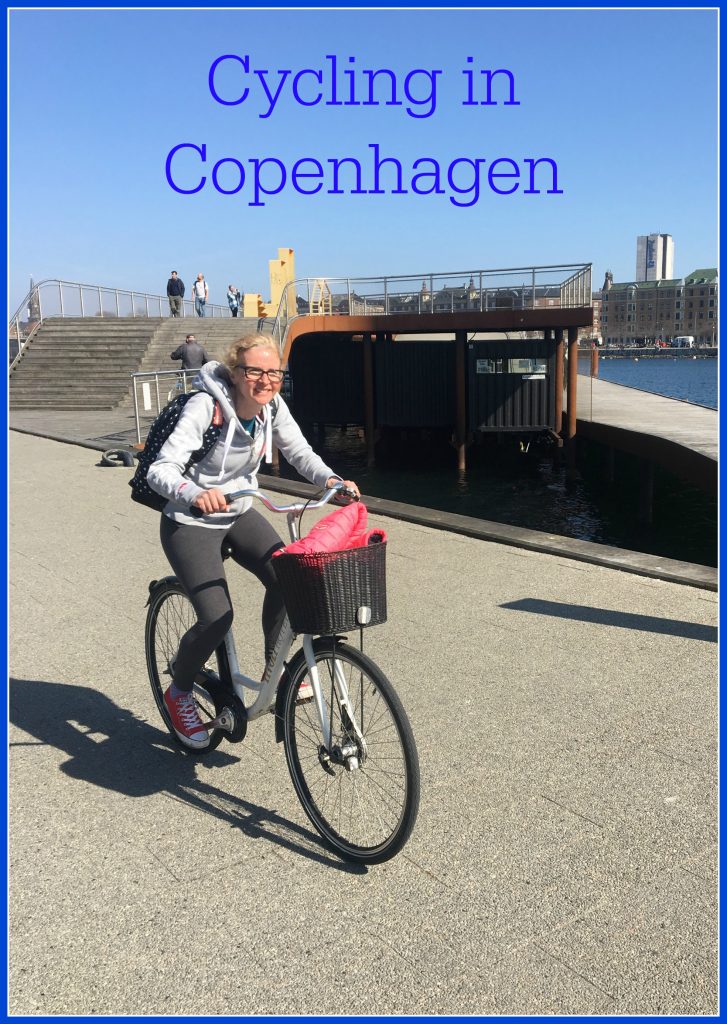 Very few people in Copenhagen wear cycle helmets, so we didn’t get the option to hire a helmet. At home, none of us would dream of going out without a helmet, even if we’re only cycling half a mile. We’re convinced a helmet saved my husband’s life, or at least stopped him from suffering a lot worse than nasty cuts. I think perhaps about 10 per cent of commuters were wearing them in Copenhagen and about two per cent of people at weekends (which is higher than in Amsterdam three years ago).

In Amsterdam, my husband had hired a tandem with my daughter and he wished he’d been able to do that in Copenhagen. We didn’t see any kids cycling and she struggled a bit with all of the rules of the road. Both she and my eldest entirely missed some cycle traffic lights and went through on red.

I loved cycling in Copenhagen. Having a bike just gives you so much freedom and it is a lovely way to see the sights. We spent a lot of time cycling by the lakes and river and the views were absolutely beautiful.

I would definitely recommend it to anyone with older kids (or no kids at all) travelling to Copenhagen.

But cycling doesn’t stop teenagers arguing. Nothing does. 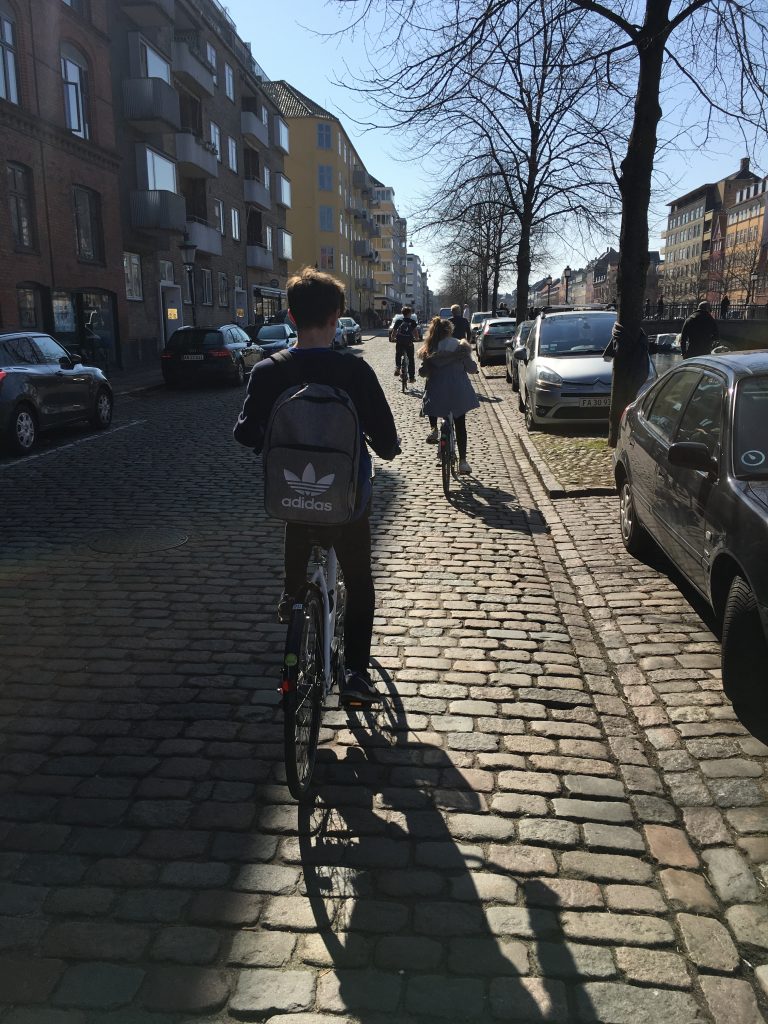