I’ve always loved shopping for my daughter’s birthday presents and I still do, even though my daughter is nearly 11. It’s so much more pleasurable than shopping for the boys. One of my sons only ever wants money and the other one never knows what he wants, which makes shopping for him challenging.

On the other hand, my daughter normally has a present in mind for herself, plus she’s very easy to buy surprises for.

At the moment, she is a big fan of fitness clothing, which is good for someone who goes to dance classes four days a week, and spends eight weeks of the year working on a panto. The Next Directory has a whole page of beautiful fitness wear and she pretty much wants the whole page (apart from the stuff with unicorns on, she absolutely doesn’t buy into the unicorn thing). She’d also picked out a couple of dresses (she loves dresses, even though she spends most of her life in leotards) and a jacket, which meant I had scope for not just my presents, but presents from other people too.

She told me a while ago about how her friend sometimes gets tickets for shows for her birthday. Then another friend got Olly Murs tickets for Christmas. She thinks tickets would make a really good present and would love to have tickets one day. If she had tickets, she would like them for Olly Murs or Little Mix.

About three weeks after she’d said this, tickets for Little Mix at Gloucester Rugby ‘s stadium went on sale. So that was her main present sorted. AND SHE HAS NO IDEA THE CONCERT IS EVEN TAKING PLACE. She will absolutely burst when she finds out she’s going to a real concert – and Little Mix no less! To be honest, I felt almost tearful watching them at the Brits on TV and imagining how excited my daughter will be.

Of course, Daddy (who is very bad at keeping secrets and gets very excited about presents) couldn’t resist telling her we’d got her a very exciting surprise for her birthday. So she’s spent two months pondering what the surprise might be – and tickets have crossed her mind.

We don’t have the actual tickets yet, so I’ve printed off the email and bought the two most recent Little Mix CDs, Glory Days and Get Weird, so she can learn the songs. We know the singles, but not the album tracks.

Apart from the entire page of the Next Directory, the only specific thing my daughter has asked for is a board thing to help you do pirouettes (turns) in ballet. I’m not sure how it works and whether kids are able to do pirouettes better without it once they’ve learned with it, but for £10 I’m not going to worry too much.

From Next, I’ve bought her a crop top emblazoned with the words Run, Dance, Repeat, which half works for her. Sadly, she’s given up running at the moment. She hasn’t done Parkrun since before Christmas for various reasons, a big one being that she just doesn’t want to do it any more! I hope to persuade her to go back at some point. I’ve also got her a casual dress, while my mum is getting her the smarter dress she wanted. 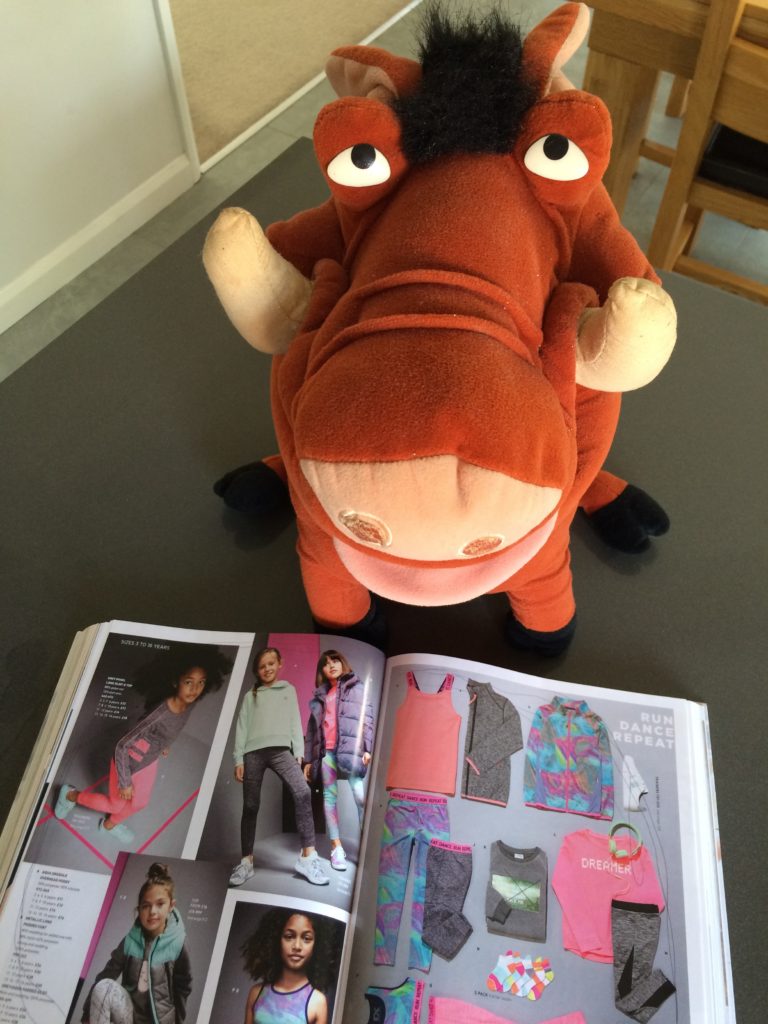 Birthday mascot, Pumba, checks out the selection in Next

Apart from dance lessons, I’d say reading and books are a special thing for my daughter and I. If you asked her, she would say she doesn’t like reading, but she reads every night and I always read a bit to her. A lot of the books she reads are ones I’ve recommended to her, which I have come across through work. She’s read most of the Jacqueline Wilsons (her absolute favourite), so I’ve bought her a couple of books by her second favourite author, Karen McCombie, including The Whispers of Wilderwood Hall, which is a brilliant book.

To finish it off, I’ve ordered her personalised photo cards from Funky Pigeon, which I do for everyone’s birthdays in my house. I love choosing the photos and putting the cards together. (Sadly, nobody ever thinks to do this for me, they have no idea how much it would mean to me if they did.) Because I had time on my hands, I even ordered photo wrapping paper for her. My daughter takes a lot of pride in the way things look and will really appreciate the time and effort that has gone into selecting 30 photos for the paper, whereas my boys would just look at it in disgust and say ‘What have you done that for?’.

All in all, I’m very happy with my birthday present shopping and I know my daughter will be too.