Sometimes my daughter gets lucky and her dreams come true. Like the time we took her to see The Wizard of Oz in the West End for her 5th birthday. We’d watched the TV talent show which had discovered Dorothy and she was very excited to see the show. On the big day, she got up in the morning and announced that she’d had a dream in which she met Danielle Hope, who played Dorothy. She hoped her dream would come true. We had our lunch opposite the stage door of the theatre, although we didn’t even realise that’s where we were. There was the smallest of commotions and there she was. Danielle. Dorothy. My daughter was able to meet her and her dream had come true.
My daughter has been a fan of Jacqueline Wilson for a long time. We saw her speak at Cheltenham Literature Festival a couple of years ago. But, since my daughter read Hetty Feather, her love of Jacqueline Wilson has moved up a whole new level. Jacqueline Wilson is a genius in her eyes. The creation of the best literary character ever. Hetty Feather herself.
My daughter had discovered there is a museum in London, The Foundling Museum, all about the Foundling Hospital, where the fictional Hetty was brought up. My daughter NEEDED to go to this museum. I thought we could go when we went to London a couple of months ago for an event, but we didn’t have time. I promised we would go while we were waiting for my husband to finish his 100 mile Ride London bike ride. But that was a Sunday. And the museum didn’t open until 11 on a Sunday. We could potentially be late to see Daddy crossing the line of Ride London. After all his months and months of preparation, that really wouldn’t be on. She was not happy, but what could I do?
Then another a blow. A truly cruel blow.
Checking out the website for the umpteenth time, she discovered Jacqueline Wilson was going to be at The Foundling Museum the day before. We were going to be in London the day before, but couldn’t get to the museum in time to see her as we had to see my son off for his Scout camp. She was not happy, but what could I do?
We were in an impossible situation with the museum. I knew just how much she wanted to go there, but I didn’t know how to make it happen. I couldn’t let her down again.
My husband suggested we go after his bike ride. I wasn’t sure how much of a fit state he would be in to go to a museum after a 100 mile bike ride and a stupidly early start, not to mention before a long drive home, but it was the only option.
We arrived in London about 2pm on Saturday. There wasn’t an awful lot of time, but, at a push, I thought we could make it to the museum. It was definitely preferable to going when my husband was exhausted and just needed to get back home.
She spent a long time in the first room, absorbing every last detail. She read every bit of information, examined everything closely, listened to all the audio of foundlings’ memories. A lot of it seemed familiar as the book was so true to how life had really been at the Foundling Hospital. She was in awe at the little dormitory beds and the uncomfortable looking uniforms. And then, the best thing of all, the original first draft of Hetty Feather, in Jacqueline Wilson’s barely legible handwriting. She read it out loud carefully, struggling with the writing. 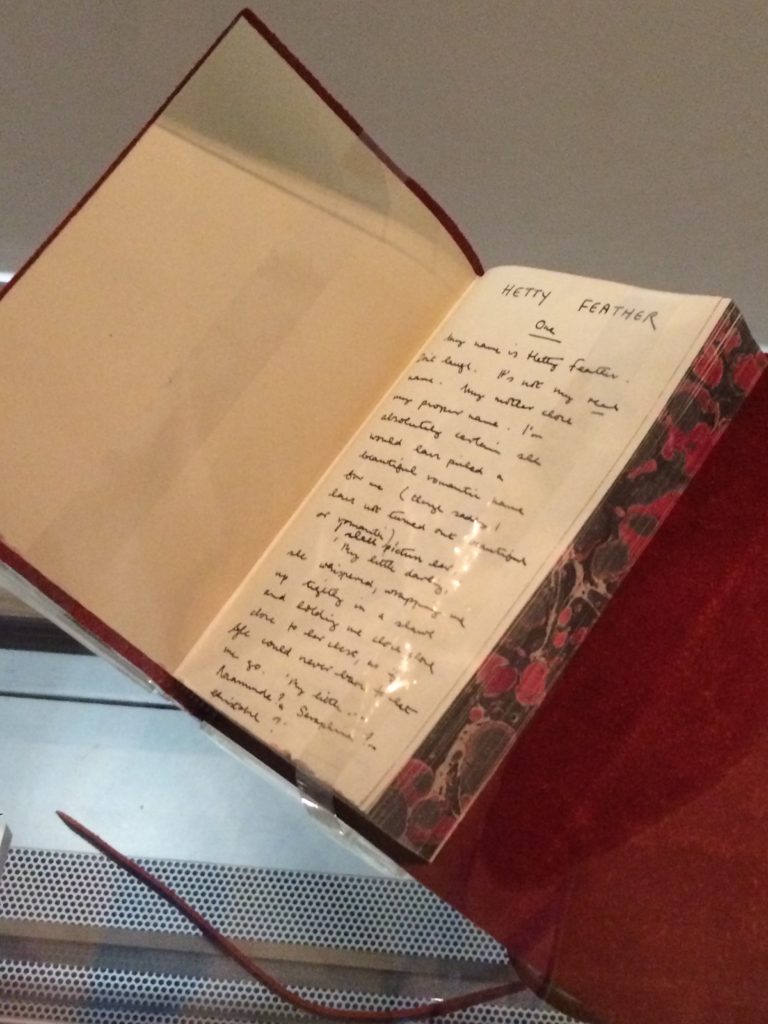 We whizzed round the rest of the museum. It wasn’t so interesting to her. It was a lot of old artwork, which had helped fund the hospital back in the day. Not as exciting as Hetty Feather.
Then we entered a room to see a queue of girls and mums. And there, at the very front, sat at a table, a white-haired vision in chunky silver jewellery. Jacqueline Wilson herself.
‘She’s there!’ I breathed. Barely daring to speak it out loud. I actually had tears in my eyes. I couldn’t believe her dream had actually come true.
I left my daughter in the queue and dashed downstairs to buy a copy of Hetty Feather – her own copy being at home and her copy of Diamond, the fourth book in the series, being sat in the hotel room.
Gradually we moved to the front. Suddenly we were the last people in the queue.
A woman stopped us.
‘Were you at the tour today?’
My heart froze.
‘No, we just sneaked in.’
They’d had a lot of people sneak in that day. A lot of people sent away. A lot of tearful girls and angry parents.
And then there was us.
‘Is it your life’s ambition to meet Jacqueline Wilson?’ she asked my daughter. When my daughter said ‘yes’, she truly meant it.
I explained about how we hadn’t booked in to the tour as I’d known it wouldn’t be possible for us to get there early enough, but how she’d really wanted to be there. How she’d cried when she’d realised how close she’d come to meeting her hero, but that it just wasn’t possible.
And, somehow, she let us stay. Because we were the last ones. Because my daughter really, really wanted to meet her. Because we’d remained calm and I hadn’t got angry.
Her dream came true. My daughter met Jacqueline Wilson.
She got her brand new book signed, exchanged a few words and had a photo taken.
She was one seriously lucky, seriously happy girl. 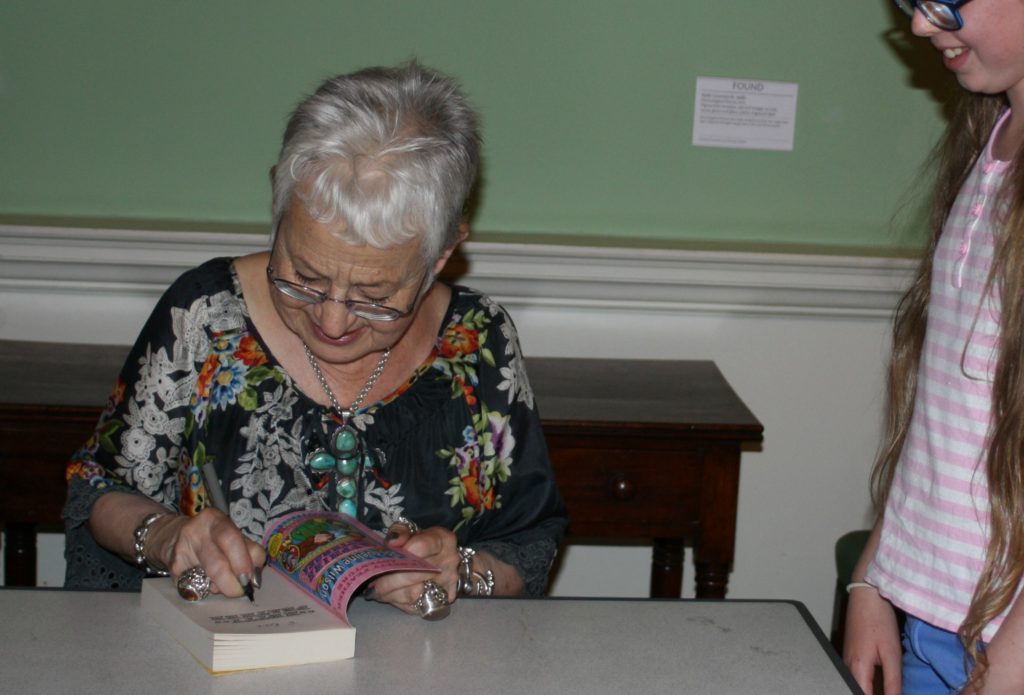