One of the jobs I do as a freelancer, in fact the only job I do every month without fail, involves me reading children’s books. They could be very short picture books or really long young adult novels. Sometimes they’re a bit rubbish, but sometimes they’re brilliant, every bit as good as the books I would choose to read myself. They’re books I’d like my own children to read and want to recommend to everyone else too!

My favourites recently include two brand new publications, Rose in the Blitz by Rebecca Stevens and The Whispers of Wilderwood Hall by Karen McCombie, and a slightly older publication, Downside Up by Hayley Long. All three books are aimed more at girls and have a teenage girl as the main character. Coincidentally, all three have time travel and absent father themes to them, but that’s where the similarity ends!

Rose in the Blitz by Rebecca Stevens

I don’t know why, but when I first saw Rose in the Blitz, I was expecting some sort of rather formulaic ‘girl growing up in the war’ story. But I was wrong. It was SO far from that and so much better than that.

Rose is a teenage girl who lost her dad three years ago. Her mum is about to re-marry and she isn’t happy about it. They live with Aunt Cosy – a very old relative who is starting to go a bit mad, but sometimes Aunt Cosy seems to make more sense to Rose than anyone else. When Aunt Cosy tells Rose about her lost love in World War II, Rose finds herself in London during the Blitz. Can she help Aunt Cosy find happiness and her lost love?

This is a truly beautiful story about love, family and friendship in its many forms.

The Whispers of Wilderwood Hall by Karen McCombie

I’ve written before about my (and my daughter’s) love of Karen McCombie. She is a prolific and highly skilled writer of books for tween and teen girls, yet she’s not one of those authors you hear much about. I hope Wilderwood Hall will get her the recognition she deserves, because it is fabulous.

Thirteen year old Ellis’s mother has just remarried and has whisked her away from London to live in a huge, crumbling mansion in Scotland. (Karen McCombie fans will recognise this theme, right down to the opinionated best friend from McCombie’s Stella etc books.)

Ellis suffers from anxiety and panic attacks, which makes the move particularly hard for her. She has lost everything at home and fears she is losing her mother, particularly when a very angry stepsister moves in with them. But then their old house starts ‘talking’ to her and she finds herself in the Wilderwood Hall of over 100 years ago, where she makes friends with a servant girl. It feels like the servant is more of a friend to her than anyone else. Will she get stuck in the past or will things work out in the future? I thought the last couple of chapters of this one were particularly perfect.

Downside Up by Hayley Long

Ronni is a very angry teenage girl who is letting her education slip. Her dad has run off with another woman and her confrontational grandmother has moved in to help her mum care for Ronni and her four younger brothers. To escape from her own life, Ronni daydreams about life as a popstar. When she’s bunking off school, she suffers a knock to the head. Have her dreams really come true or is she still daydreaming?

Although a comedy book, this has some really important messages about family, friendship and teenage mental health. Clearly, Ronni is a girl who is suffering because her father has left and is trying to cover it up with bad behaviour, but doesn’t even recognise that herself. 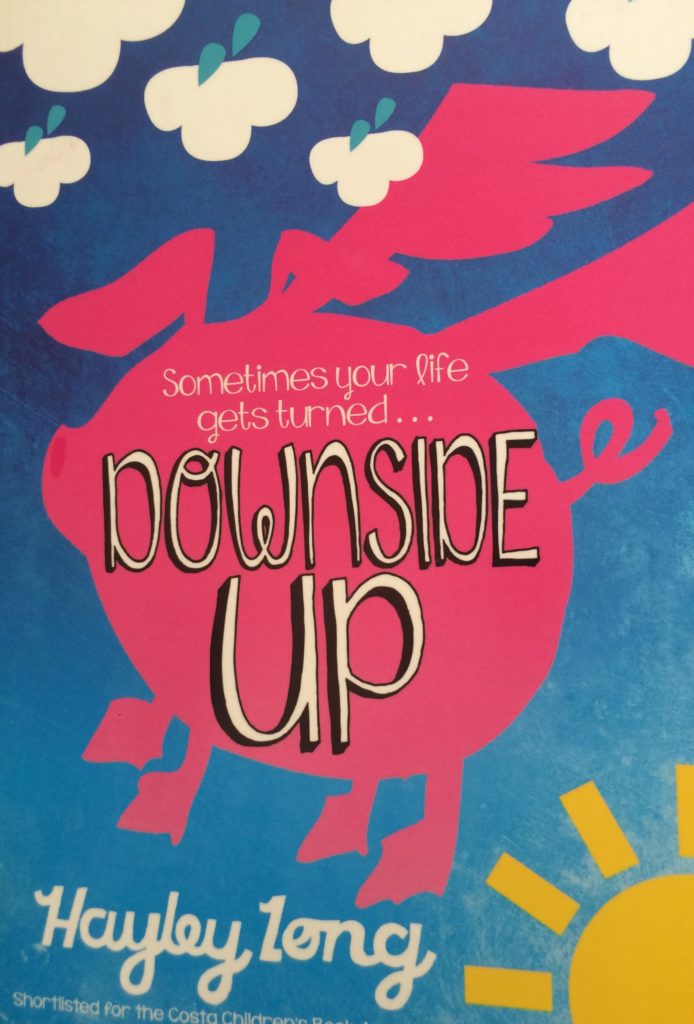 I would say Wilderhood Hall is suitable from age 10 or 11 and Rose in the Blitz and Downside Up from about 13.

All three of these books are fantastic and they all made me cry – which is always the mark of a good book in my world! I would definitely recommend them for daughters, nieces or even yourselves!