After our guinea pig, Daisy, died unexpectedly at the age of 2, our thoughts turned to getting a new friend for Eric. Guinea pigs are sociable animals who need to be with their own kind. Although, strangely, Eric seemed to be doing well on his own at first. Briefly, I even considered that he might be better on his own. But we knew getting a new guinea pig would ultimately be the best thing for him.

One Tuesday, I sneaked in on my own to have a look. I knew my daughter would be really cross about me looking at guinea pigs on my own without her, but Tuesdays are hectic days and there wasn’t really time after school. There were A LOT of guinea pigs. And so many different colours! Black, brown, patchy and grey.

Guilt at going to see the guinea pigs on my own was eating at me. So, a few days before we were due to get a new guinea pig, I suggested to my daughter we go to the pet shop after school. To look at the guinea pigs. Definitely not to buy.

All of those lovely coloured guinea pigs were still there! The black, the brown, the patchy and the grey. I liked the grey. And so did my daughter. There were two grey guinea pigs. Rational thought was leaving us fast. We wanted a grey guinea pig! We couldn’t wait.

I spoke to a staff member about my bereaved guinea pig and the need for a new friend. He said there were a few options for introducing them, but probably the easiest was to just bring the bereaved guinea pig into the store and see how he gets on with the babies.

The clock was ticking. It was getting close to tap dance time, but we needed Eric to meet a grey guinea pig! We went home, put Eric in his box and picked up the boys. Unbelievably, in the 20 minutes we’d been gone, one of the grey guinea pigs had been sold – yet not a single guinea pig had sold in the two days since I’d first seen them. What were the chances?

The shop assistant was hesitant when we told him Eric was 2. He was also hesitant when he saw the size of Eric. I knew Eric had grown, but I couldn’t believe the size difference between him and the babies. I reassured the assistant that Eric was very docile and that it was his poor departed friend who had been the alpha male.

So the shop assistant gently placed the grey guinea pig in the box next to Eric. And they just sat there, still and peaceful. The assistant reassured us that if Eric was going to attack him, he would almost certainly have done it straight away. 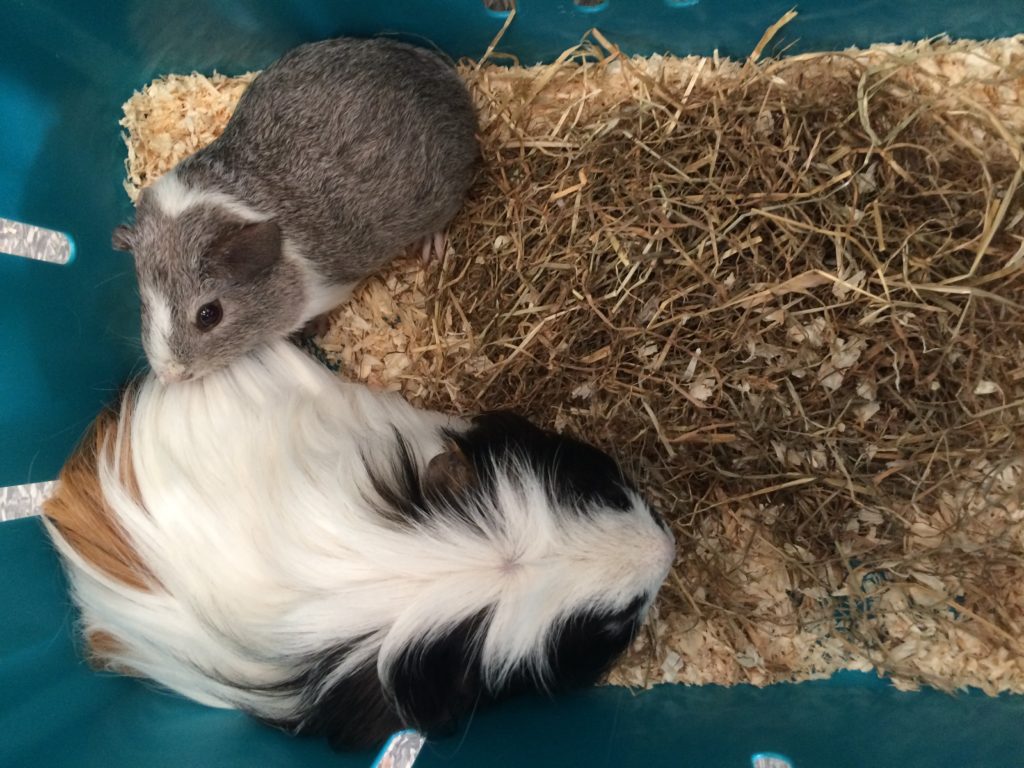 And then something wonderful happened. Eric started licking the baby’s face. He was grooming him, caring for him. He wanted to look after him. I’ll be honest, my eyes might have got a little watery at that point. All Eric wanted was a little friend to look after.

After that, there was no doubt that Eric and the baby would get on just fine.

So we brought our new grey guinea pig home and settled him in with Eric.

Well, sort of settled in. Eric was so excited, he couldn’t sit still. He was jumping and chasing the baby round in his excitement. He started eating some pepper, then stopped and gave it to the baby. The poor baby had no peace and hid under the little bridge. But Eric will calm down and I know they will be great friends.

I’m so happy that Eric loves him already. I think little Wilfred has probably got the best big guinea pig brother ever.