My skin turns to sh*t

After my skin spiralled out of control earlier this year, it HAD to get better. There was no other option. I literally couldn’t carry on as I was. Couldn’t face the world.

So the dermatologist put me on some hardcore antibiotics and told me I would never go back on Roaccutane. I started to see improvements. Fast. I also felt dreadful. I was supposed to take them three times a day for a week, but I couldn’t function on them. I managed four days, then cut down to two doses a day. After two weeks, the dermatologist was satisfied with my progress and I went down to one dose a day.

All of a sudden, it didn’t look a whole lot different from when it was it at its absolute worst. I’d got to the point where I kept my head down and wouldn’t look people in the eye again. 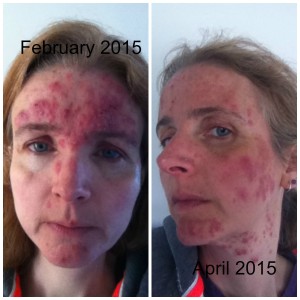 Sometimes, I just wished I could have my Roaccutane back. The Roaccutane that, for three lovely months, made me look flawless. For the first time since I was 11. 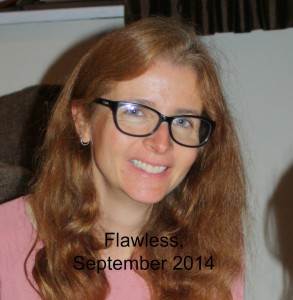 Then I remembered that, somehow, Roaccutane had caused all this. I would be happy to have my old skin back. The skin that always had a bit of acne. Never flawless, but never the sort of skin that made me need to hide. I had spots. It wasn’t great for a woman in her 40s, but it was normal to me. I dealt with it.

What you have to understand about me, is I don’t care about my appearance. I never stressed about it as a teenager and I don’t stress about it now. I don’t wear make-up, I don’t get my hair cut. I’ve never plucked my eyebrows, used hair straighteners or worried about my shape or size and I’ve never used fake tan. For me, appearance just isn’t a big deal. It’s not on the radar. So if I hate my appearance, believe me, it’s bad!

And you can’t wear a wolly hat in April.

I walked into the dermatologist’s room with my head down. I didn’t need to speak. He saw it straight away.

I have to say – he’s so good. Not one of those lovely NHS types you want to be your best friend, but very knowledgeable, very professional and very understanding.

The antibiotics had kept the spots at bay, but reducing the dose wasn’t strong enough to keep it away. I can’t stay on the antibiotics forever, or even for much longer, so I have to have a long-term solution that works.

The dermatologist totally gets that I hate looking like this. He knows it has to change. And he will make it change for me. He will try every combination of every treatment going until we hit that magic formula.

I’ve had blood tests, lots of them, to check if there is anything strange which has caused my outbreaks.

In the meantime, I’m onto plan C or D, I don’t know what we’re up to now. Unbelievably, I’m back on Roaccutane. But a VERY low dose. 10mg. I was on a low dose before – 20mg. A lot of people have 30, 40, 45 even. Being on a low dose doesn’t make it any less effective, I just have to use it for longer. Alongside this, I will stay on the antibiotics for a month.

If all goes well, I will gradually increase the Roaccutane and decrease the antibiotics. I will be very closely monitored until I’m better.

I want a miracle. I want to wake up tomorrow and it all be gone. That’s not going to happen. But maybe this time it will be the start of a solution.