Home » Uncategorized » The side effects

The dermatologist warned me there would be side effects. He described the antibiotics he was giving me for what-I-thought-was-acne-but-turned-out-to-be-rosace as ‘brutal’. A lot of people can’t take them.

They were remarkable stuff. In my long experience, changing skin is like turning the Titanic, it’s a long, slow process and you have to take something for a few weeks to see any change and three months for a significant change. Within a couple of days, my skin was improving. This stuff was miraculous. 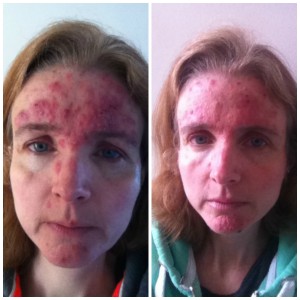 But that taste in my mouth that wouldn’t shift… It felt like I’d had a really strong-tasting meal the night before and it was lingering. And those little glimmers of nausea…

The taste got stronger and stronger. The glimmers of nausea weren’t glimmers any more, they were there all the time.

I’d started the antibiotics on Thursday, by Monday I felt dreadful.

I felt sick all the time. I felt weak. When I sat down, I thought I would never get up again. It was like somebody had tied my hands and legs to the chair. Just walking round the house was an effort. And that taste. There was no let-up. It was relieved only be eating, drinking and teeth cleaning. I needed to take my third dose for the day, but I just couldn’t bring myself to do it.

My skin was better, but I couldn’t do this for nine weeks.

I was going to phone the dermatologist to ask for something different, but I thought I would just try cutting down a bit. My dosage was going to drop to two a day anyway, so I just needed to lower it a bit early. 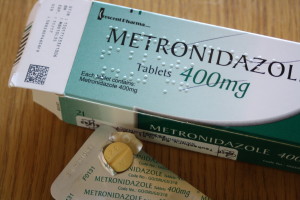 The nausea diminished and then went away. The taste in my mouth went down to a manageable level. The weakness in my legs improved gradually. I wasn’t able to run all week, but I at least managed to walk further than school on Thursday and Friday.

I’ve found the right balance. I still have the side effects, but I can cope with them, and my skin is still getting better. I never would have believed it could improve so quickly.