A few weeks back, I wrote about how unhealthy I’d been lately. In that post, I mentioned the sore eye I’d had for a few weeks. I was diagnosed with conjunctivitis. I was surprised. I felt very sorry for toddlers because I had NO IDEA conjunctivitis could be that bad.

I had antibiotic eye drops, which improved the eye for a couple of days, then made no difference at all.

Two weeks later, the eye was worse – and the other eye was starting to get sore too. So I went back to the doctor.

She decided to ‘hit it hard’ – more antibiotic eye drops, taken more regularly, plus oral antibiotics. Surely that would do the trick?

‘Rash’ being the polite way of saying ‘flipping awful acne’.

My acne cleared up almost as soon as I went on Roaccutane, and I expected it to stay that way. I keep a photo on my phone from this time last year, to remind me how bad it got and that I mustn’t ever let it get that bad again. 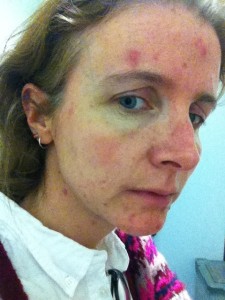 Just before Christmas, I started getting a few spots on my forehead. I was horrified when I saw this photo of myself, taken on Boxing Day. 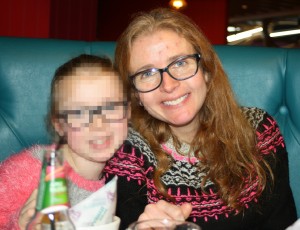 Now I look back on that photo and think, ‘wow, what I was worried about?’. Because right now, my spots look worse than they did a year ago. 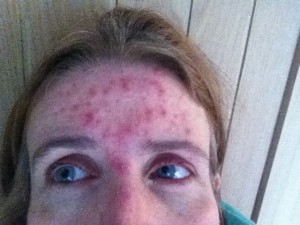 I wondered if my eye infection was due to them basically spreading right to my eye – they had got as low as my eyebrows, which had never happened in the 30 years I’d had acne. Or maybe a side effect of Roaccutane? Although wouldn’t the side effects have kicked in already after seven months, with only four months left?

The doctor looked up the side effects, concluded there were just far too many of them for her to know if the two were related, and gave me a bigger quantity of antibiotic eye drops, plus oral antibiotics. This would sort it! I was pleased to read in the leaflet that the oral antibiotics are used to treat infected acne (among many other things). They were going to sort everything at once!

But they didn’t. The original bad eye stayed the same and the other eye got worse. It was so bad I couldn’t lie on my right side at night because it hurt.

I had a plan b). I would bypass the GP and call the dermatologist at the hospital, who would doubtless have a solution. When you’re on Roaccutane, you can pretty much see the dermatologist when you like. The side effects are so nasty, they would never risk not seeing someone. So I rang the GP, with the intention of telling her that’s what I was going to do.

She told me I had to go in. IMMEDIATELY. In the next half an hour.

I saw the skin specialist GP who diagnosed blepharitis, which is one of many side-effects of Roaccutane. Ironically, the acne has got so bad, he also told me to come off the Roaccutane for a few weeks, to give both my eyes and my skin a chance to settle. He then prescribed me another two different types of drops and gave me an emergency referral to the hospital.

The hospital didn’t tell me anything different to the GP. It’s blepharitis, which will take a while to clear and won’t completely go away. I have to get into a bathing regime for my eyes, which will take approximately half an hour a day (the leaflet advises to fit it into your routine like brushing your teeth, but I don’t brush my teeth for half an hour). I’m interested to know where I will find those extra 30 minutes, but I guess I will have to. I can use the time I save on not endlessly going to the doctor. She’s also given me another prescription for something different, so the two medications the GP gave me the previous day are redundant. That’s four prescriptions for five different types of medication for my eyes in three weeks. Thank goodness for prescription pre-payment certificates!

I’ll be back at the hospital in a couple of weeks, when I seriously hope both my eyes and my acne will have started to calm down.