Well it’s been over a month since I started my Roaccutane treatment for acne. How is it going?

The sore scalp was unexpected. How am I supposed to moisturise that? Every time I touch my hair, skin seems to fall out (sorry!). The unexpected plus side of this is that I don’t need to wash my hair as often. I’d been on the treatment two and a half weeks when I went to wash my hair and realised it really didn’t need it at all. It just wasn’t greasy in the slightest. Now I can go a week without washing it! Win!Dry lips were absolutely promised from about day five. They actually kicked in at day 10. They’re not as bad as I imagined, they’re not sore, cracked and bleeding, but they do need regular Vaseline and I’m aware I’m constantly licking and biting them! I’d been told that aching limbs and tiredness were likely and that I shouldn’t do ‘intensive exercise’. Training for a half marathon isn’t intensive exercise, is it?! Strangely, the aching leg which has woken me up daily for the best part of a year now has actually gone away since I’ve been on Roaccutane and the half marathon training is going very well. After two weeks, I could see an improvement in the spots on face and back, even on top of the improvement from previous treatments. My chest also looks much clearer and, to be honest, I wasn’t even that aware I had spots on my chest! When I do get spots they disappear much quicker, which is nice.
One of the biggest downsides is feeling sticky all the time as I’m coated in suncream.  I put on eight hour suncream (the extra thick, sticky stuff – yuk!) at 8am every day whether sunny or not. The advantage of eight hour suncream is that I don’t need to reapply, the disadvantage is it’s thick and sticky and I never feel really clean, especially as I coat myself in moisturiser in the evenings too to avoid my skin drying out too much.

Another downside is a couple of nasty, deep wrinkles that have appeared around my mouth and chin. I’m guessing they are connected to the treatment, although they could just be something to do with me being nearly 41!

I’ve had my first check-up at the hospital, where I was offered the opportunity to increase my dose. But why fix what isn’t broken? I’m happy to take Roaccutane for a bit longer, knowing I’m not getting any side effects. So I’m going to be on it for 11 months. I’ve also signed to say I’m happy not to have monthly pregnancy tests, after all I’m 40 and have managed to not get pregnant for nine years, so what are the chances of it happening now? A big reason for opting out of the pregnancy tests is that they’re at 8.30am, which is completely non-negotiable. What mother can manage to get herself to a hospital for 8.30am when she’s supposed to be getting her kids to school?

All in all, I’m really pleased with how the treatment is going so far – both in terms of my skin and the lack of side effects. It’s really good to see the real me appearing under the spots. It’s a shame I didn’t do it years ago while I was still young enough to appreciate what looks I had, but I couldn’t have done it while I was having kids and the side effects always scared me. 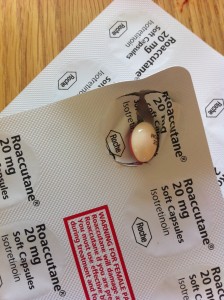