I’m the healthiest person I know. I NEVER get ill. I’ve had a few coughs and colds over the years, but nothing I could actually describe as ‘ill’, that actually stopped me from going about my everyday life (and no, I wasn’t doing the mum martyr ‘no time to be ill’ thing  –  I genuinely wasn’t ill). The last time I was actually ill was in April 2009. Yes, 2009. I had a bit of a temperature, a headache and felt rundown and lacking in energy. I actually had to rest.

The last time I vomited was in 1985. Yes, EIGHTY FIVE. When I was 12. If my uncle had cooked the turkey properly, the last time would have been when I was 8. (I have a phobia of vomiting, I’m sure my body knows that it must not react in this easy for fear of upsetting itself.)

Not only do I never get ill, but I was diagnosed as officially extremely healthy just after my 40th birthday. I went for the health check which is recommended after you turn 40 and the nurse said she had never seen anyone as healthy. I had the lowest cholesterol she’d ever come across (and I ate a lot of chocolate then, just as I do now.)

But for someone so incredibly healthy, I do spend an awful lot of time at the doctor’s and hospital. So much time, in fact, that I don’t know how I would have managed if I also had to go to work.

I’m still under the care of the hospital with my spots and Roaccutane, but, since the kids went back to school, it feels like my health needs have spiralled out of control. In the space of just three weeks I’ve had three hospital appointments – my MRI scan and follow-up appointments from the MRI and the lump I found in my breast. Every hospital appointment brings with it layers and layers of uncertainty – will I find a parking space, how late will they be running, will I need to have tests while I’m there? But I’m learning that, as a general rule, a hospital appointment means wiping out half a day. 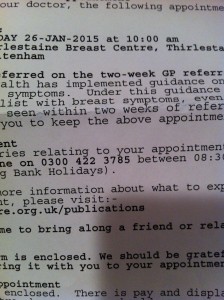 I’ve also had two GP’s appointments – for the lump in my breast and a particularly nasty dose of conjunctivitis. Conjunctivitis?! At my age? I am neither a toddler nor do I have toddlers at home. I have never had conjunctivitis in my life before. Being someone who, you may be surprised to discover after reading this, doesn’t as a rule like to grumble and bother the doctor, I soldiered on for about 10 days, then I got some drops from the pharmacy and soldiered on for another 10 days, before I had to admit defeat. The eye was bright red and swollen, right down to my cheek bone. It was both incredibly sore and it ached. It was so bad it woke me up in the morning. It was my husband, who finds my ‘habit’ of going to the doctor hilariously funny, who said I had to see the doctor. It was so bad that the doctor said she needed to see me again two days later. After a week of using the antibiotic drops she prescribed it’s getting better gradually, but I don’t think the swelling and redness will actually have gone when I finish the course in a couple of days.

On top of that, I’ve also had to take both my eldest and my daughter to the doctor’s. This was my eldest first trip in years. The GP’s surgery carries the same issues as the hospital, just to a lesser extent. There’s still the  uncertainty about parking (although, thank goodness for my Mini, which makes manoeuvring into a crowded car park so much easier) and about how late they will be running – 20 minutes is about standard at the GP’s surgery. So even for a simple doctor’s appointment, once you’ve added on going to the pharmacy, you’re looking at an hour and a half out of the house.

I’m not sure why I’ve needed so much medical care in recent weeks and months. I suspect it’s an age thing. But I’m really intending to have a break from it now, as I need to actually get some work done!

I will share the results of the MRI and what happened at the breast clinic in separate posts.