Top of the league

Home » Family » Top of the league

I missed my son’s second league football game of the season, as I was away at the MAD Blog Awards. They were flying high after their first game. Could they keep it up?

My son scored the first goal of the game. He’s moved into midfield this season, where he has always wanted to play, after many years in defence. He is really growing into the position and he is loving it. And by loving it, he is playing better.

Then the opposition scored. Twice. Including a penalty. 2-1 down is not a good place to be. I’ve seen the team go behind so often and then start falling apart. They get down about being behind and they seem seem to stop trying. 2-1 can very quickly become 5-1 and another defeat. Then they go into their following game still feeling down and, before you know it, you’ve got a season of defeats and you’re bottom of the league.

I don’t know the finer detail of how the scoring went after that, apart from they took the lead. One of the team scored a hat trick. Suddenly they were 6-2 up.

It’s early days, but they’ve got six very valuable points in the bag – they hardly got more than that in the whole of last season. They’re not the league whipping boys any more. Right now, they’re the ones to beat.

They’re equal top of the league. They’ve scored 11 and conceded three and one of their players is currently top scorer in the league.

I’m very proud of my son, his team-mates and their long-suffering, hard-working coach (that’ll be my husband!).

Here’s to the next game! 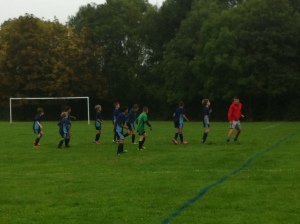