A couple of years ago, the year after my eldest left primary school, our school introduced the head boy and head girl. They also introduced prefects and deputy head boy and girl.

People who read my blog often may think I’m a competitive mum, and you’d be kind of right. I want what’s best for my kids – I want them to achieve what I know they are capable of achieving, no more no less. I’m not pushy, but I like them to challenge themselves to achieve their own potential.

So when I heard about head boy and head girl, I thought ‘I’d like my kids to do that’. Yes, both of them, when their time comes. And I knew they would want it too. They are very similar personalities and both have just the sort of qualities any school would value in its head boy and girl. They are well-behaved and hard working, responsible and self-assured. They are popular without being disruptive.

All along we thought my son had a good chance. But nothing is certain.

He wrote his letter. He focused on his good behaviour, his responsibility, the way he likes to help younger children and the fact that he has represented the school in many competitions, both academic and sporting. There was one thing he didn’t mention – being clever. Because that’s not a factor in being made head boy.

The letter was typed, signed and put in an envelope. Then we waited.

The decision was due on the day of the MAD Blog Awards. I asked him to text me to let me know what happened (he’s loving having his own phone and it’s so nice to get texts and phone calls from him). We were certain he would get prefect – there are about 12 of them out of a year group of 60. But could he get head boy?

I was sat in my hotel room and had just that second said to Suzanne aka 3 Children and It that I was expecting a text from my son. Then this came. 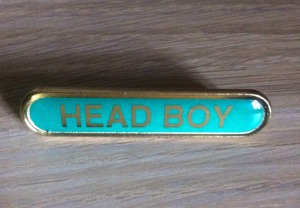 No words. Just the picture.

I can’t describe how excited, happy and proud I was of my boy.

(Although, having seen me jumping round the room, cheering and chattering non-stop, Suzanne probably can!)