Our family likes nothing more than a nice stay in a hotel. Even a necessary Travelodge on the way to Disneyland a few years back made my kids almost as happy as Disneyland itself. I’m not sure what it is about hotels – the beds aren’t as comfortable as at home, there isn’t as much space as at home and they’re usually too hot and too noisy. And I for one tend to wake up even earlier than I do at home – 3.30am on our first morning in Barcelona last year was quite an achievement. I’m an eat breakfast as soon as you wake up kind of person, so having to wait for a) my entire family and b) hotel breakfast times isn’t easy.

But, having said all that, we still love time in a hotel. I love that there are very few jobs to do, apart from sorting a few clothes out for the kids. There’s no kitchen to wipe, no dishwasher to fill and empty again, no clothes to hang up and put away. And that’s as good in a Travelodge as in a 5* hotel (not that we have much experience of 5* hotels).

For the three carnivores in the family, it’s all about the breakfast – and full English is full English in pretty much any hotel. For a vegetarian with a wheat intolerance, hotel breakfasts aren’t easy and usually leave me starving by 10am. For a vegetarian who is obsessed with carbs (my eldest), they are the bee’s knees. How much toast, croissants and small cakes can one boy eat at 7.30am? Quite a lot actually.

As a family of five, we’re usually forced into two separate rooms as very few hotels have big enough family rooms. Obviously this is more expensive, but we have a boys’ room and a girls’ room and I do love to share a room with my daughter. She’s so quiet and peaceful and, as she can get a bit nervous about the dark and strange places, she insists I ‘sit tweeting’ as she goes to sleep. Win!

Going back a few years, we used to sit in the bathroom until the kids fell asleep, but that’s not going to happen now. All that we can hope for is it that they will go to sleep at something vaguely resembling a decent hour (my preferred time for them in the school holidays would be 9pm for my daughter and 10pm for the boys, but of course they have other ideas).

On our recent trip to Snowdon we stayed in the lovely town of Betws-y-Coed. And we managed to get a family room! Win! That meant we could stay two nights, rather than the one we were originally planning. I was relieved about that – I’m not sure any of us could have coped with a four hour car journey after climbing a very high mountain. In my imagination the room was very big with maybe two doubles and a single sofa bed or maybe a double, a double sofa bed and a single. 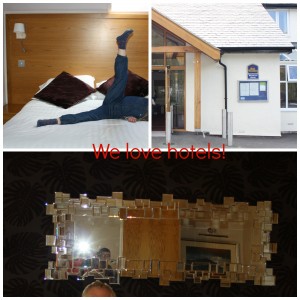 In reality it was like a little flat away from the main hotel – so we didn’t get troubled by any noise. It had a lovely bathroom with a powerful shower! Our bathroom at home is beautiful, but the shower is so slow, I had actually forgotten what it felt like to go in a decent shower. It felt really flipping awesome. It was also two rooms, but they felt so small I found it a little claustrophobic. In my daughter’s head, she was sharing a room with us. In Daddy’s head, she was sharing a room with her brothers. One room had a double bed and the other, clearly more of a lounge, had a double sofa bed with a bed effectively made up of sofa cushions on the floor. Well there was no way my daughter was sleeping in there with her brothers! And no way they were going to have her there. Of course she wanted the usual Mummy and daughter arrangement, but there was no way Daddy was sleeping on a bit of settee on the floor – or sharing a bed with one of the wriggly boys.

So we compromised on her falling asleep in our bed with all the lights on and Mummy ‘sitting tweeting’ (result!). That way, the boys could make a bit more noise and go to sleep a bit later. Then, while I was in that lovely powerful shower, my husband fell asleep next to my daughter and there was nowhere for me to go. Apart from a bit of settee on the floor. Oh, but that wasn’t actually available as the boys had annoyed each other, so my eldest was on the double sofa bed and his brother was on the floor. Believe me, you would not put my eldest and daughter in a bed together. They are quite happy to say they hate each other (although I’m not happy for them to say it) and argue from the moment they get up until the moment they go to bed.

So I had to wake my husband up to move the kids. Because there is no way I can move a large 10 year old dead weight. He moved my son up onto the big bed, but then he appeared with all the bits of settee for the floor. For some reason he’d decided my daughter should sleep on our floor. But the bed wouldn’t fit. So he started moving bags and clothes and boots in a desperate attempt to squeeze her in. I should have helped, but mainly I just hid under the covers and laughed at his increasing frustration at all the mess.

And finally we all went to sleep in approximately the right bed.

Do your kids enjoy staying in hotels? How do you organise where everyone sleeps? (Please tell me it isn’t just me who has these problems!)