An afternoon with my little ones

Home » Family » An afternoon with my little ones

The other day something unusual happened. I got an afternoon to myself with just my younger kids. No pressures, just the three of us. And it was priceless.

We had arrived in Betsw-y-Coed that day, and my eldest was hassling to go up Snowdon on his own with just my husband the day before our ‘official’ walk. He’d been up Snowdon with my husband, his best friend and husband’s best friend a year ago and it was pretty much the best experience of his life. It was the walking and the sense of achievement certainly, but I suspect something to do with the undivided attention of his dad.  As the eldest of three, he constantly craves one to one attention (which he will happily take from Grandma and Grandpa if he can’t get it at home) or even solitude.

At some point my husband had apparently said, no doubt without thinking it through, that he would take him to Snowdon again on his own. Does anyone else’s husband do this? Make rash promises with the very best intentions, but then fail to think them through and leave Mummy to be the bad guy and point out that, actually, it really isn’t possible?! But my husband had said it. Once. A year ago. As far as my son was concerned, he might have written it in blood in triplicate in front of witnesses. His dad had said it, so he was going up Snowdon. On his own.

In the absence of any solo trips to Snowdonia, he’d decided he had to go up the day before the rest of us. And I was reluctant. We were supposed to be away AS A FAMILY. Doing things TOGETHER. But then I realised. If he didn’t go, he would hold it against me, his dad and his sister forever. We would never hear the last of it. To be honest, it wasn’t worth the hassle.

So they set off for Snowdon just after lunch and I took the younger two swimming in the small hotel pool. I’m not really a fan of swimming (too cold, too wet), but my daughter loves it, so I do it for her every now and then. We had the pool to ourselves and did loads of swimming and playing, which we all really enjoyed.

Then after swimming we wandered into the town to find some food. I knew what I wanted (pasta and vegetables in a tomato sauce) and what I didn’t (chips). My stomach is a constant source of trouble to me and finding the right food to eat while we’re away can be particularly challenging. We walked right to the other side of the town, checking every menu as we went , before settling on a pub where we could eat outside. And I could eat pasta and vegetables in a tomato sauce and the kids could eat pizza. Win! 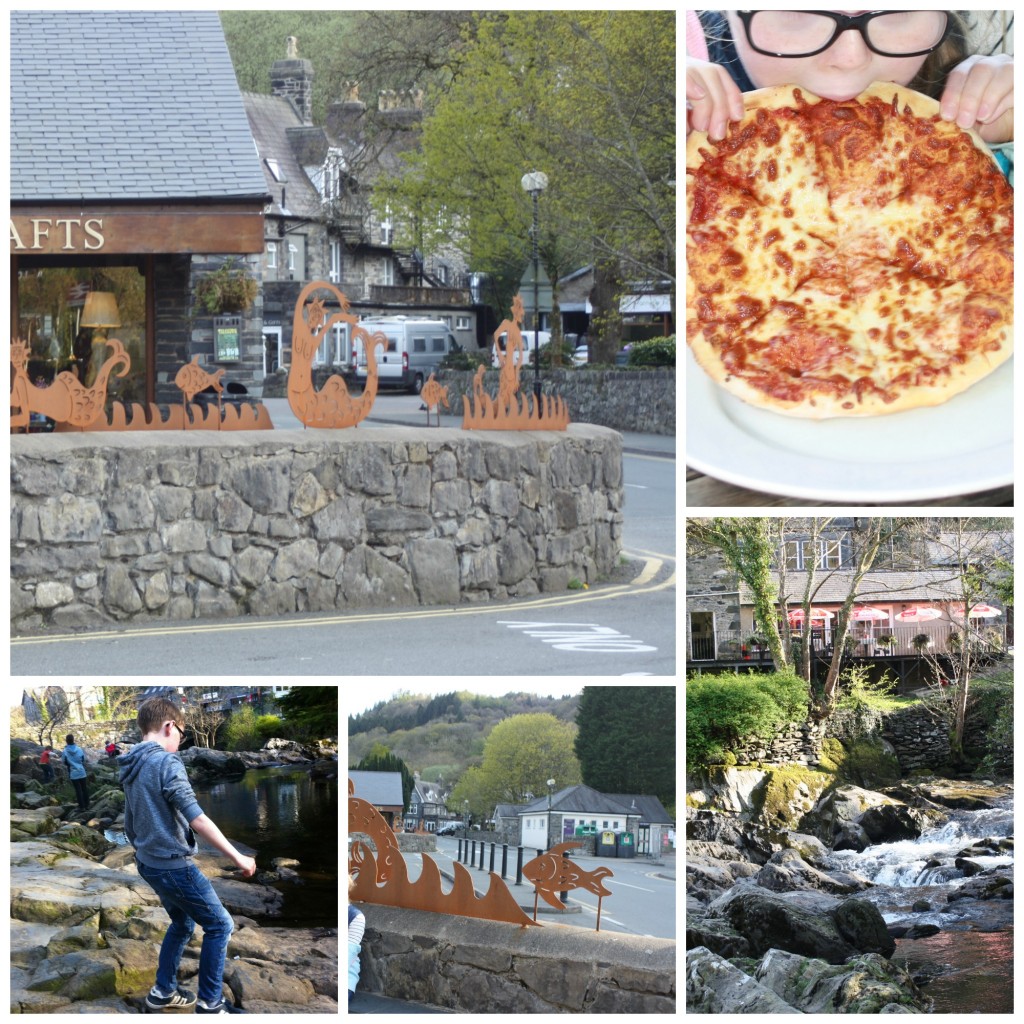 The food came quickly and was delicious – exactly what I wanted. The sun was out, the weather was warm and we felt relaxed and happy.

After we’d eaten we headed up to the river and the kids spent a good half an hour scrambling over rocks and skimming stones. Although my son reported that the stones were ‘not as good as the Padstow stones’ and he never managed more than two bounces. The river was full of kids in their bare feet with their trousers rolled up. My kids weren’t quite brave enough to take their shoes off as the water was freezing, but my son still managed to get his trainers and arms wet and my daughter frightened the life out of me stumbling on some rocks on an un-tied shoelace. Exactly three seconds after I’d pointed it out to her and told her she needed to do it up.

It was so nice to see the two kids together. Two’s company, three’s a crowd and my daughter is usually the crowd. They went through a phase of being close last year, but a shared love of Minecraft has brought the two boys right back together and my daughter has gone back to being left out. But she adores her brother. You can see it in the way her face lights up when he’s around. She loves it when he gives her attention, spends time with her and makes her laugh. And I love it too. I love to see them so happy together without the constant niggling of their big brother.

We walked the long way back to the hotel through the centre of the town which has some quirky rusty metal artwork of mermaids and fish. With the town much quieter, we  could get a much closer look at them. Then we headed into the local shop for ‘pudding’. My daughter will not eat a meal without pudding, and on the rare occasions when she has to go without she will not let it go and will moan for hours that she hasn’t had it.

It was 7pm when we got back to the hotel and all they wanted to do was get into their onesies. They hadn’t been up Snowdon, but they were happy and tired too.