These last few weeks haven’t exactly been plain sailing – starting with my husband’s cut face through having my wisdom teeth out to the house move that nearly wasn’t, then was to finding out at the worst possible time that I’m likely to lose my job. A bit of a Scrooge at the best of times, in the midst of all that, I was hardly likely to be feeling that festive, was I?

Oh, and did I mention half of our possessions are missing? So what were the chances of us even knowing where our Christmas tree was hiding?

When we moved into the rented house, it wasn’t even clear whether we’d still be here for Christmas. But it turned out pretty quickly that we would be.

Many of our possessions are in the garage of the house we’re buying. I haven’t been there myself, but apparently everything is wedged in and it’s impossible to find anything. On 13th December which is, in my book, a perfectly acceptable time to put your Christmas tree up, my husband located the tree in the garage. The lights were in the same box.

But where were the decorations? Not in the spare room which is piled almost to the ceiling with boxes and not in those random plastic crates in our bedroom. They could only be in that garage, no doubt propping up some very heavy wardrobe or maybe the base to our bed, which hasn’t been seen in nearly four weeks.

All we had in the house was five chocolate Santas and a green felt Christmas tree my son had made and a star he’d made out of a Coke can on Scout camp (before he scalded his finger). To be honest, the Coke can star wouldn’t go on my tree if it was the last decoration on earth. It’s made from a COKE CAN, for flip’s sake. Holidays are coming, holidays are coming…

Thank goodness for my mum, who has twice as many Christmas decorations as she needs…

But it turns out my mum’s assessment of how many decorations are needed for a tree is somewhat less than mine. It is about a third of what is actually needed. And I’m not, by any stretch of the imagination, an OTT tree kind of person. We have a small, 12 year old artificial tree, which usually has enough, but not too many decorations. 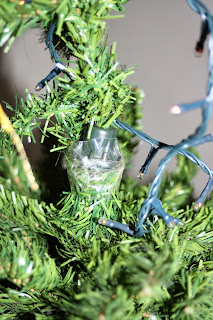 Yes, that is sellotape

I’ll be honest, I felt miserable. Even more so, when my son managed to snap the wonky top off the tree and we had to sellotape it back on, then a couple of glass decorations jumped off the tree and smashed to smithereens on the floor. They didn’t have cotton to hang them, so my kids had kind of wedged them on, which was obviously a bad idea. In the absence of any cotton to prevent further incidents, I removed the other four identical decorations. 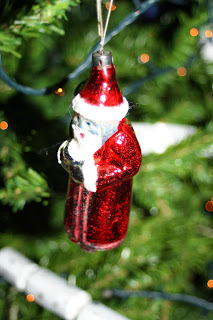 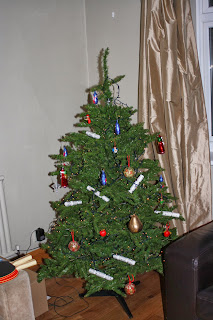 In its full ‘glory’, not so much. Believe me, we didn’t waste precious decorations putting them on the back or sides

Of course, I could buy some new ones. If we weren’t just about to get a bigger mortgage and I’m likely to lose my job. Yes, I know you can get a box of decorations for a fiver. Apparently we can’t even spend a fiver. It’s only a Christmas tree and it’s a waste and we’ll have the old decorations back next year… (The more observant among you may guess that this is not actually MY opinion.)

In short, I hate the tree.

Oh, but it’s really sparkly, because you remember the lights which were found with the tree? Turns out they were the outside lights. So it’s got sod all decorations, but it’s sure got a lot of lights.

Linking up to The Gallery at Sticky Fingers. Pop over to see some lovely photos of other people’s Christmas trees. They probably even like theirs.