Every year the juniors/ key stage 2/ whatever you want to call them at our school do a Christmas concert/ performance at the big cold church. This year was my daughter’s first time and she was really looking forward to it. Her brothers had done their best to dampen her spirits – telling her how many hours she would be stuck indoors, how there was no space to run around, how she would have her lunch late… Undeterred, she had taken everything on board about the day and was fully prepared, even asking for two bananas for her lunch – because they’d been told to eat plenty of food in general and more fruit specifically. This being the girl who hardly manages two bananas in a week.

Tradition dictates that I arrive just before the concert starts, park miles away, step in a muddy puddle in the dark and rain, then burst into the church so that everyone stares at me and struggle to find a seat. But this year the Work-Life Balance Gods did smile upon me and they did decree that I would spend a rare day working out of the office which would mean that I could both arrive on time AND take my own children there, rather than rely on my long-suffering parents.

But arriving within the allotted time-frame is no guarantee of a closer parking space or a decent seat. There was only me on my own, surely I would find a lone seat near the front? No I wouldn’t. I found a seat on the right, quite a long way back with a lovely obscured view. Every year I swear I will take the afternoon off work specifically to prevent this happening and every year I don’t.

The concert is a mix of music, readings and singing. There are some whole-school songs, some individual class songs and some carols the audience are supposed to join in with.

The kids sit stacked up so you can see the year 5s and 6s clearly. If your daughter is in year 3 and sat on the floor, you can’t see her as well. But my son gave me some lovely grins and when my daughter stood up I could see her pretty well.

It was lovely, after six years of these concerts, to finally see one of my kids actually open their mouth to sing and actually smile and look like they were enjoying themselves. She was positively beaming right at me. During the instrumental break in the year 3 song, she also took the opportunity to pull a series of comedy faces, purely for my amusement. 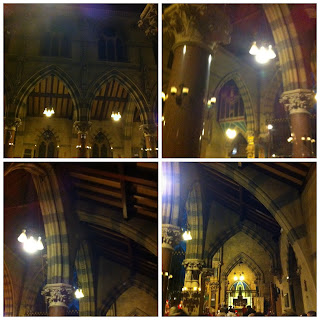 I couldn’t see my son at all playing Ode to Joy on his guitar with the music group and I couldn’t see him in the year 5 song either. He was as far to the left as possible and at the back, obscured by Santa hats and a woman who moved to take clearer photos of her own daughter. Thanks for that. I experimented with half squatting behind a pillar for a better view, but it mainly just gave me leg ache.

The choir sang Mary’s Boy Child and all I could see was the top of my daughter’s little shiny head. But at least I knew for definite it was HER shiny head. And every now and then she would stretch up and crane her neck just so I could get a glimpse of her glasses.

This year the whole of year 3 is learning violin for a term (my daughter is also doing lessons separately), so her class played a little tune on the violin, which was sweet, but a bit squeaky, as you cam imagine.

The kids were less than enthusiastic about the ‘real’ carols which the adults joined in on. Until some year 6 girls suddenly decided to do a particularly loud ‘Oh come let us adore him’ which seemed to get everyone animated. It wasn’t even the third ‘Oh come’, it was the second one so it technically shouldn’t have even been that loud. And I reckon the words were the wrong way round in the second verse of Oh Little Town of Bethlehem. 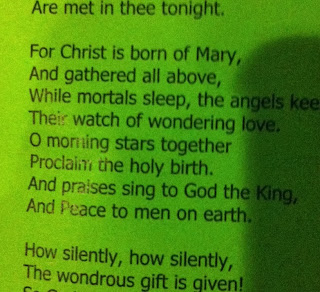 The whole thing was finished off with a couple of very rousing songs by the whole school, including Rudolph Rumpus, a totally hyped-up version of Rudolph the Red Nosed Reindeer, which had everyone smiling and laughing, even the year 6s. And if you’ve ever had the pleasure to know a year 6, you will know this is a really big deal.

And so we went home, stepped in a puddle as we got in the car, and the kids moaned about the lack of space, how long they were in the church and the disgusting toilets. And this time next year, we’ll do it all over again!