It seems to be a well-known fact that when you move house you lose things for a day or two. It’s probably quite irritating, but also slightly funny.

When you move into a rented house and half your stuff goes into storage (even if it is only down the road in the house you’re buying), it turns out the scope for losing stuff is so much greater. Having less than 24 hours between exchanging contracts and the guys turning up to pack your house doesn’t exactly help matters.

The difference between removals guys packing stuff and you packing it yourself is emotion. You look at stuff, think about it, remember little stories in your head and eventually pack it carefully. They pick it up, wrap it, shove it in a box and shift it. This is a good thing. This is what you are employing them to do.

But when you’re moving in two different directions, a little bit more thought is required.

I (mistakenly) thought my daughter would be the most stressed by the move, so I told the guys she should keep all her stuff. I told them, rather stupidly, that the boys didn’t need theirs. When I said that, I meant they didn’t need all of their hundreds of books and the drawers rammed full of crappy toys they don’t use but don’t want to get rid of. I didn’t mean they needed NOTHING.

The day before we moved, I took the time to pack suitcases containing enough clothes to get us through the first three or four days, including the kids’ rugby, football, dance, Cubs and Scouts stuff. I put the small number of Christmas presents I’d already bought at my mums’ house. I carried the kids’ musical instruments and the washing basket full of dirty laundry over to the rented house myself. I am so glad I did these things. I just wish I’d had a bit more time to think of the other things we might need.

When we arrived in the new house we couldn’t find the boys’ clothes that were lying flat in their wardrobes. So we’d got the jeans and jumpers that were on hangers, but not the Tshirts, pants and socks. We couldn’t find the cushions (the actual seat bit) off one of our settees or our pans.

The pans turned up at the bottom of a box I clearly hadn’t been through properly and the cushions were rescued from the garage, but the clothes? Fallen into a big black hole. Along with my son’s textbooks from his tutor, my daughter’s homework folder and her violin book (see, I rescued the violin, but didn’t think about the book).

Now I know their job is to pack and not think and I know I said the boys didn’t need their stuff, but why wouldn’t they realise they do actually need their clothes?!

It’s not good when you realise your son has no clean pants for the next day because he only owns three pairs and you have to tell him that he will need to wear the same pair again. Then he tips cereals on his only pair of pyjamas and it soaks through to his pants and he has to put on a pair he wore a couple of days earlier.

It’s not good when you realise he has no trunks for swimming the day before he needs them and you frantically text a friend to borrow some (who doesn’t have any, but is kind enough to sort it with another friend to lend you some).

It’s not good having to grovel to teachers and tutors that you’ve lost books and homework, but you will have them back in mid-January. They’re very good about it, but you feel a bit rubbish. And the kids feel worse because they’re not rule-breakers, they do everything by the book and they’re scared to break the rules even if it can’t be helped.

So you buy some new pants and some new socks and some cheap Tshirts, friends lend you some old ones and life gets back to normal. Until you discover the next essential thing which is missing… 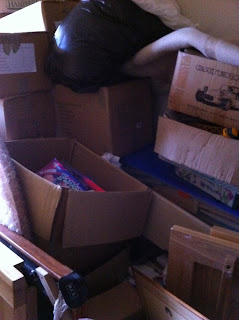 Needle in a haystack – and this is just the spare room pile, the garage is much worse!