My husband and I are active, fit and healthy types. We exercise, we work hard and we don’t get ill (well apart from my husband getting flu last Christmas). So we didn’t expect to both end up with face-related problems in hospital within 36 hours of each other.

The wisdom tooth extraction has been  on the calendar for some time now. I booked a sick day off work. Prior to that my last sick day was in December 2006 (seriously!) and that’s not because I’m a martyr and go into work when I’m ill. It’s that I genuinely don’t get ill. So this was quite a big deal for me. I planned school governors meetings and even a potential house move around the wisdom tooth removal date.

As part of being fit and active, my husband plays football every week with a group of blokes ranging from teenagers up to 50. They play properly and from time to time he’ll come home with a nasty gash on his leg. The other night I got the kids more or less in bed and got in the shower. Then my husband appeared. He was very early. Something was obviously wrong.

He’d been elbowed in the head. There was no bump, no bruise, but apparently there was a really big cut. It had literally spurted blood (sorry if you’re squeamish) and he thought he might need it stitching. The men from football had done a pretty good job of patching him up and it had stopped bleeding, but he needed to go to hospital. As it’s probably not the best idea for a man with a head injury who’s lost blood to drive himself to hospital, I took him. So my lovely mum and dad came to look after the kids as ever. They’ve often had to come round to look after the kids while we took one of the others to A&E, but never so I could take my husband there.

The triage nurse was un-phased – she didn’t think the cut particularly big and thought it ‘might’ need ‘a’ stitch. So I was feeling quite chilled – maybe we’d been too hasty in rushing to hospital? My husband started eating crisps – and the blood poured out from under his plaster. He pressed on it with a tissue from the dark depths of my bag and we waited to see the ‘patching up nurse’ (not actual NHS terminology as far as I’m aware).

He lay down on the bed, she lifted his plaster and blood poured straight into his eye. Gross! I was a little bit shocked.

It was quite a big cut and quite deep. It would need stitches and would scar. She patched him up again while she got all her equipment and then injected him with local anaesethic. She was so lovely and upbeat and positive the whole time she was dealing with him. I decided to leave the room for the actual stitching.

There are six stitches. I think he looks a bit like Frankenstein’s monster. It’s OK from a distance, but looks pretty gory close-up. I’m pleased my younger son (the squeamish one) didn’t get too freaked by it.

My husband can’t sleep on his front and things like sneezing and laughing hurt his face.

And 36 hours later it was my turn. I’ve only got two dissolvable stitches so he wins on the stitches competition, but I did have a swollen face and can still only eat soft food. I can’t lie on my right side. Like my husband, things unexpectedly hurt my face – like nose blowing.

From being so fit and healthy, the two of us have turned (temporarily) into invalids. It’s a very strange phenomenon for us.

I was going to include a photo of my husband’s stitches, but when I cropped the photo it made me feel a bit sick. I thought it best not to inflict that on other people. So here’s one taken a week after the accident, when his stitches had been removed. He’s made a remarkable recovery. 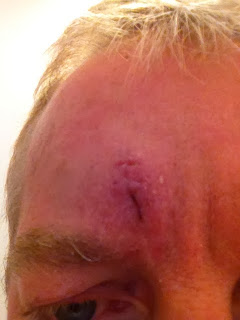