Of all the Christmas performances, the Cubs and Scouts’ annual carol concert and variety show has to be my absolute favourite. It lacks the polish of the secondary school Christmas concert To be honest, it is its polar opposite. It is perfectly imperfect and that’s why I love it. Everyone has a go if they want to, whether their talent is genuine or not. And the audience has a good-hearted laugh at the whole thing. Sometimes the comedy is intentional, often it is unintentional, and that’s why everyone enjoys it so much.

The show kicks off with some cute poems from the Beavers. Everyone has a line to say.

There were two sketches they’d come up with themselves, both of which hinged largely on Father Christmas falling flat on his (well-padded) stomach. There was a part where some of the adults in the audience were in hysterics with tears running down their cheeks. I suspect it wasn’t to do with the actual script. I’m not sure what they saw and what I missed, but I’m sorry that I did.

There were some jokes that we all knew the answer to before they’d been delivered:

‘What do you call a reindeer with no eyes?’

‘What do you call a reindeer with no eyes and no legs?’

There was a tech-deck performance, which if you don’t know what a tech-deck is, it’s a tiny little skateboard which you skate with your fingers. I’m sure it’s very clever and impressive, but it doesn’t work THAT well on a stage. The boys rounded it off with a rendition of ‘We wish you a tech-deck Christmas’, in which they inserted the words ‘tech-deck’ an awful lot until they ran out of steam.

My son was part of a musical quartet performing Jingle Bells with his friends – he played guitar, one played violin, one played a keyboard and the other played the clarinet. They played it very well. 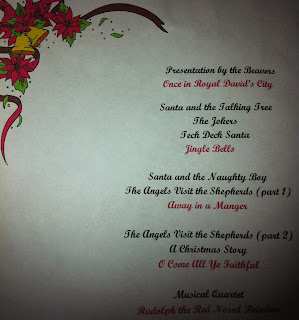 There was a section where all the Cubs said what they liked and didn’t like about Christmas: I like getting up early to open my presents, I don’t like being told off by my mum when I wake up early to open my presents. One boy said he liked Christmas kisses, which I’m sure wasn’t true, but it was a great opportunity for one of the older leaders to come on pretending to be a really old lady and chase them all round with the mistletoe.

Then it was the Scouts’ turn – an I’m A Celebrity spoof, a (somewhat American) song called Dumb ways to Scout performed very confidently by some of the girls and an incredible break dance routine.

My son decided to go for ventriloquism, something he has never shown an interest or aptitude for before. He had a conversation with Santa in which Santa moaned about how hard he worked and how he gets a cold every year and how he looks forward to sleeping for a month. It was pretty funny, I was impressed!

Between all of the acts there were carols for the audience to join in with. The organ played a little bit faster than most people were used to, so everyone was out of time. And the Scout leader tried to lead us all in a rendition of a verse of Jingle Bells that only she knew.

All in all, it was a evening which will live long in the memory. The determination and hard work of the kids, whether their acts worked or not, was a joy to watch.