Our school doesn’t do a nativity or play in the Juniors, they do a concert. And because there isn’t enought room in the school hall, they do it in a big, cold church. The church is about three miles from school and getting the kids there is a bit of a logistical nightmare. Not that I’m ever involved. It always happens on a work day, so my mum and dad are left to work out how to get the kids there and back and how to feed them in time.

This was my fifth time at the big, cold church and everything is so predictable. Because I’m at work, I’m always running slightly late, so the stay-at-home-mums with one child get in early and get the best seats and the best parking spaces. Every year I say next time I’ll take the afternoon off work. Every year I don’t.

I get there and there are no parking spaces. It is always raining. There are always massive puddles. I parked. Then I had to park again. There were so many puddles and so many muddy leaves that I initially missed the double yellow lines. So I drove further away from the church and parked. Then I got halfway to the church before realising I’d left my camera in the car. Not that it’s possible to get a good picture, but it seems wrong not to try. So I went back to get my camera.

Inside the big, cold church, the volume of happy kids was almost deafening. We are talking two classes each in years 3-6. That’s 240 kids.

I usually have to sit right over the edge where I can see nothing. This year there were some seats left in the middle. At the back, of course.

I couldn’t see my boy. I kept getting up and looking around. I couldn’t even see anyone from his class. Then I saw him – he was looking for me too – and he was directly opposite me. After that, I kept my eye on the shiny top of his hair. Sometimes I would get a glimpse of the top of his glasses if the person in front of him moved slightly.

Every year my husband is even later than me. He usually arrives at 5.59 and everyone stares at him, and me, as he walks in. This year he surpassed himself. 10 past 6. The third song had started.

The kids sing a couple of songs together, then it moves on to indidividual year groups, interspersed with musical ensembles and readings by year 6s.

My son played his guitar in the school band. Not that I could see him AT ALL, but he assures me he was there.

The year 3s were practically drowned out by the rather Americanised backing track. The year 4s – my son’s group – sang their songs in Spanish. They did O Come All Ye Faithful. The choir sound loud and clear and even had a bit of movement thrown in. I thought forward a year to when I KNOW my daughter will be in the choir. (How can she be old enough for that? She’s my baby.) The year 6s did a medley with a bit of a two-part harmony going on. I remembered when my eldest was sulking last year because he didn’t get chosen to do the special bit. Even though he doesn’t like singing, can’t sing and makes no effort to sing.

There is something beautiful about bible readings of the Christmas story and it gives me goose bumps every time – it’s so magical and it has so many memories. The years from one Christmas to the next go so fast these days. I even remembered reading some of those lines myself when I was about their age.

It IS very cold in the church – I never took my coat off, my concentration wanders a bit when I can’t see my own child and other peoples’ kids singing can get a LITTLE bit boring. Every year my husband threatens not to go again. Great, leave me on my own in the big, cold church. 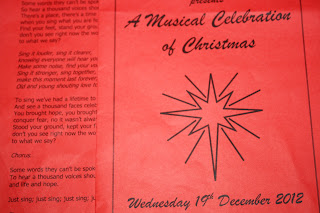 But then all is forgiven. The concert ends with the kids all singing together – Shakin Stevens’ Merry Christmas Everyone – it’s rousing and uplifting and they’re dancing a bit and you just know how happy they are.

But this isn’t the highlight, oh no. They do Sing – Gary Barlow’s Commonwealth song – and it is so beautiful. They are not choirboys and girls – they are kids from council estates and  middle class kids, they’re just normal kids. The idea of the song was that as many children as possible should sing it in 2012 and, 12 days before the end of 2012, they did. They sang loudly, they sang quietly, they gave it their all. My boy was on his tip-toes and I could just see him in front of me and I had tears in my eyes because it was so beautiful.

Sing it louder, sing it clearer, knowing everyone can hear ya…

And it didn’t matter that the church was big and cold and my seat was crap and I couldn’t find a parking space and there were puddles everywhere. Because kids were singing.