Amsterdam is a beautiful place and incredibly easy to get to. We flew from Birmingham, which took only an hour to get to, even with a bit of bad traffic. The fight was just 45 minutes – brilliant! From the airport, you get a train straight into the centre – the trains run every 15 minutes and take about 15 minutes. It costs just 3 euros 70 per person.

We stayed at Mauro Mansion, which is rated number 1 on Trip Advisor in Amsterdam. It’s quirky, to say the least. It’s a small hotel in a 16th century building and all of the rooms are individual. As well as looking good and a bit weird, there are some really nice touches. There’s a fridge in the room which contains free drinks (it’s not stocked up during your stay, so you can only drink them once!). You can get yourself a free coffee 24 hours a day or borrow a DVD from their collection. There’s an ‘honesty bar’ where you can help yourself to drinks and snacks at any time of the day and night. You just have to let them know at the end what you’ve taken. It’s all priced very reasonably. 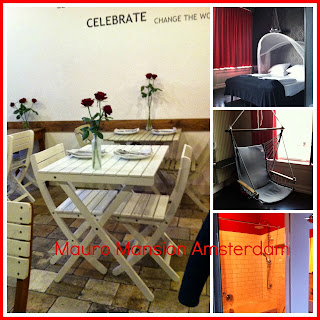 Talking of the cost of stuff… Food and drink seems slightly more expensive than it is at home, but the attractions are very good value. Entrance to the Anne Frank House was 9 euros, bike hire was just 7 euros for the day and an hour long boat trip on the canal was 9 euros.

The canal boat trip is highly recommended by me! It’s such an easy and relaxing way to see the city. It’s a great thing to do you when you first arrive to give you an idea of where you want to visit in more depth. 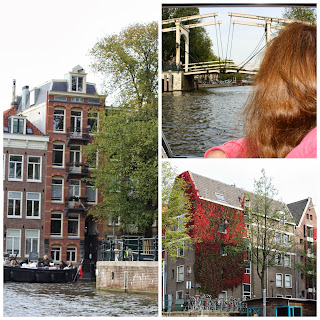 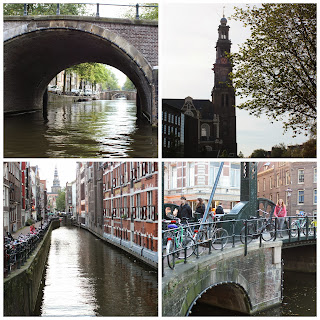 While on the canal boat trip, we learned some interesting facts about Amsterdam. The first canals were built in the 13th century and, as the city grew, they built more canals to accommodate the growing population. There are now 100 miles of canal and 1,000 bridges over the canals in the city.

The houses are all very tall and narrow (our hotel being no exception – those stairs nearly killed me) because houses were taxed on their width (which kind of makes sense when space is at a premium). But a tall, narrow house does create problems. Like how the blinking flip do you move furniture in? But they think of everything, these Dutch folk. All of the houses have a hook at the top, so heavy and large items can be winched in. We saw some of them in action while we were there – and it’s a pretty scary sight, to be honest!

Because space is at such a premium in Amsterdam, many people took to the canals to live. Some live on proper boats and others on large shed-like structures on the water, a bit like static caravans or ‘park homes’. Apparently most of them have permission to live there. Imagine that happening in Britain! Only ‘most’ people having permission to live somewhere.

In Britain, Amsterdam has a bit of a reputation for sex, drugs and stag dos. I’m pleased to say, it is far better than this. It really is a beautiful city. The sex and drugs stuff is mainly limited to a fairly small area of the city. It’s kind of interesting to see once, but that certainly wasn’t what we were there for! We decided to avoid the area, which is heavily policed, at night as it was a bit too busy and not the sort of place we wanted to be. 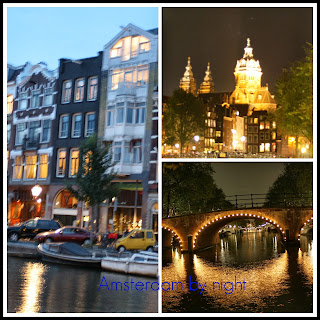 If you’re looking for a short break, Amsterdam is well worth a visit. Next time we might even bring the kids! I’m sure they’d love it.