For eight months of the year, Sunday morning is about one thing and one thing only. Rugby.

I’m not naturally a rugby kind of person. I’ve been watching it for over two years and I (whisper) still don’t really understand the rules… I know about running and scoring tries and not passing back, but that’s it. I don’t know what a scrum is for or a ruck.

I’ve always been responsible for my younger son’s rugby, so I pretty much just watch him. I’ve seen him go from tag rugby at under 7s, which he excelled at, and now into his second year of contact rugby. Slowly, but surely, I’m getting the hang of the rules. His team are not kicking yet, because that would present me with a whole new level of confusion.

The one thing I have learned about rugby is that it is ALWAYS cold. You wrap up or you die.

I wear layer upon layer of clothing. I literally have no shame. I start with thermal baselayers – top and bottom, then move onto a Tshirt or two, a jumper or two and, finally, TWO coats. That’s two winter coats. I wear a hat, two pairs of gloves and two pairs of socks, plus fleece wellie liners and my toes are still like blocks of ice at the end. They are so bad I’m limping.

Yet theoretically the temperature is above zero. Because when the temperature drops below zero and the ground is frozen, rugby is called off as it’s too dangerous for kids to hit the ground. It’s the wind which is the killer. All those big, open grounds with no hills and no trees and that cold wind whipping across them…

And that’s our Sunday mornings. I moan about them sometimes. Sometimes I think it would be nice to do something else on a Sunday. But the reality is, we would miss it if we didn’t have it. It gives our Sundays some structure, a reason to get up, ready and out. It gives us fresh air. 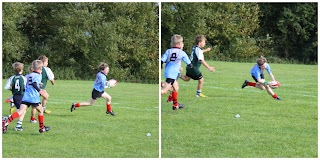 But most of all, it gives our boys their rugby – some exercise and some teamwork. What better thing to do on a Sunday morning?

I wrote this post in response to a prompt over at Sticky Fingers. Pop over to see how others have interpreted the theme ‘Sunday morning’.