So much of our knowledge of the Second World War and the persecution of the Jews is defined by The Diary of Anne Frank. This incredible story of an ordinary Jewish girl and her family hiding from the Germans has moved generations of people worldwide.

When we went to Amsterdam, I knew we had to visit the Anne Frank House.

It’s hard to describe the experience. It is so moving. From the first quote from the diary displayed on the wall, I felt myself on the brink of tears. If I’d have let myself go, I know I would have found myself sobbing uncontrollably,

The diary paints such a vivid picture of a life we just can’t imagine, a life too horrific for words and the incredible bravery of not just Anne and those in hiding, but those who risked their own safety and freedom to keep them there.

The house is full or artefacts – including the diary itself, as well as photos and even things like the marks on the wall to show how Anne had grown during her time in hiding. There are videos from people who knew the family and many quotes from the diary around the walls.

The place is packed out with people, yet the silence is deafening. Everyone is so moved that they feel to speak would be disrespectful. It’s dark and quite cold to preserve the artefacts.

You get to experience the ‘secret annex’ itself, where Anne, her family and four others hid for over two years. It is incredibly small and stifling, with no daylight or fresh air. But so much better than the alternative for those in hiding. None of the furniture remains – although there are photos and a scale model of what it would have looked like at the time. The lack of furniture is at the request of Otto Frank, Anne’s father and the only survivor of the eight people who hid there. He wanted it left empty to signify the emptiness of the pointless loss of so many Jewish lives.

The family was discovered in 1944. Anne tragically died just before liberation. Her father sent several months searching for her and her sister before discovering they really were dead. It was he who found the diary and got it published, first in Dutch, in 1947.

By the end of my look around the Anne Frank House my face was aching with the strain of not crying – nobody there was actually crying so it didn’t seem like the acceptable thing to do. The sheer horror of what the Jews suffered is too unbearable for words.

And atrocities continue to this day. The Nazi’s persecution of the Jews may be confined to history, but in Syria and the Westgate shopping centre in Nairobi, the pointless hatred and waste of human life continues. How many more people will suffer in the future? Will this kind of hatred of other nations and other religions ever stop?

When I was 15 I was in a theatre group that put on a play of The Diary of Anne Frank. The group was lucky enough to be invited to perform it at the Anne Frank House. What an incredible honour. For some reason I didn’t go. I suspect I didn’t even ask my parents if I could, I just assumed I wouldn’t be able to. So I never got to share in this amazing once-in-a-lifetime experience. 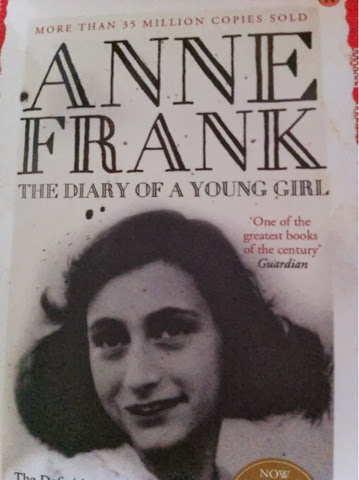