Forty years ago today, a baby boy was born in the North West of England. He’d been due the following day – his Daddy’s birthday, but they’d decided to deliver him a day early. He had a brother two and a bit years older. His sister came along when he was six and a half.

He grew up to be a happy boy, with lots of friends.

When he was just 13, tragedy struck. His Dad died of cancer after a short illness. They’d had a special bond and it hit the boy hard.

But he picked himself up and bounced back. He had a great group of friends and made the most of his teenage years – going to the pub and fixing crap cars.

At 18, he left his friends and family, packed up his old Mini and went to university in Nottingham (or polytechnic as it was in 1991).

A year later he met a strange girl. She wore very bright trousers and, strangest of all, she didn’t drink alcohol. A few months later she became his girlfriend. 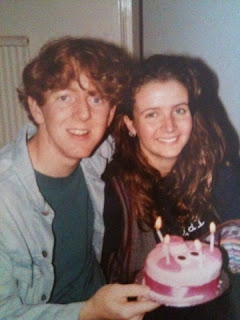 With a gentle push from his girlfriend, the boy carried on studying and got his degree, whilst also doing a ‘proper’ job and working in a pub. The boy and girl lived in poverty, sometimes happy, sometimes unhappy as they struggled to make ends meet.

By 2000 they’d left Nottingham and poverty and both had proper jobs. The boy and the girl got married.

In 2007, the boy took a big risk and started his own business.

Today the boy is a happy family man, who loves his kids and his work. His business is going well, despite the endless recession.

The boy is my husband. Happy 40th birthday. Here’s to many more…