I wrote recently about my struggles, as a new dog owner, to find a groomer and kennels for Hetty. Dogs are clearly big business and, from my experience, there is a gap in the market for more groomers, kennels and doggy day care. But there is another way that dogs are a big business.

Before we got Hetty, our cockapoo puppy, we’d read that it costs about £100 a month to keep a dog, which didn’t seem too bad.

The insurance alone is £28 per month. The groomer, which she goes to about every two months, is £40 per time. But the food isn’t too expensive.

And I do find it very annoying that manufacturers clearly aren’t making dog products which are actually dog proof. Hetty is a nine-month-old, 8kg dog. She is not very big or very strong by any stretch of the imagination. Yet she is able to destroy dog products. Sometimes within minutes of being given them.

So far in her life, she has destroyed two beds (and the third is damaged) and two harnesses. She has lost two identity tags.

When we had the 38 degree heatwave in July, I bought her a cooling mat. I read the instructions on the box warning of the importance of a dog not biting it, because the contents were dangerous. Seriously? A dog not biting something?! So I used the mat very carefully. She lay on it for about 10 minutes and as soon as her teeth went near it, I took it off her. We did this twice. I went to give it her a third time and I realised it was already leaking the dangerous contents. 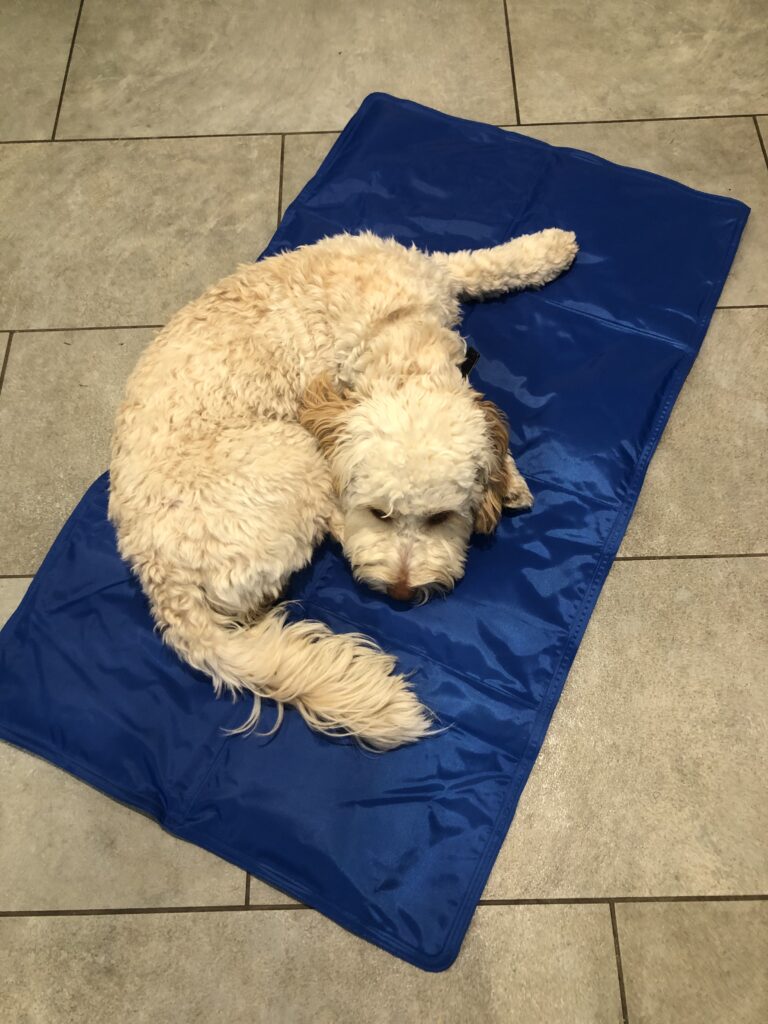 Hetty on the cooling mat before she wrecked it

Hetty likes nothing more than to play with a ball. She likes to chase and fetch a small ball, but she also likes to push a football around with her nose. She’s destroyed two human footballs. It didn’t take her long at all to start removing the coating with her teeth. So we picked it all off before giving the ball back to her. Which she promptly popped. She does still carry a deflated football round in her mouth sometimes.

In the pet shop, we found a football-sized ball, which felt sturdy and had a tough material on the outside. It also had a handle, so a dog could carry it in their mouth. Hetty was delighted with it! She carried it proudly, thrashed it around a lot, and within about an hour of buying it, the stitching was already starting to come away on the handle.

A couple of hours later, the stuffing was starting to come out of it.

Another £8 down the drain.

At the same time, we bought her a licky mat. These are rubber mats with something like a maze sticking out of them. You put some sort of dog treat on them, like dog peanut butter, and licking it off is a way to calm them and give them a treat. Hetty was delighted with that too.

Before the first lot of peanut butter had been licked, she’d bitten a little chunk off the mat. When she bit another chunk off the next day, we put the mat in the bin.

We met a fellow cockapoo owner, who told us he buys puzzles for his dog and she loves them. These sound like a very good idea for the winter, when Hetty won’t be able to spend as much time running around the garden as she does currently. But we’re not going to buy any just yet. We know what will happen to them.

Remarkably though, the giraffe and elephant cuddly toys she got on the day we brought her home, are still intact. And she still carries them round in her mouth and sits chewing them every day. The two blankets we got that day are also still intact. I don’t know how these things have survived when so many other things have got destroyed so quickly.

But what I do know is, we won’t be rushing to buy Hetty anything new any time soon.